While most St. Louisians were hunkering down during our monsoon weather conditions, our family ventured out on Saturday. The St. Louis Artist Guild was hosting a collaborative storytelling program in partnership with Maturity and Its Muse's "Celebrating Art for Senior EngAGEment Festival", and the 38th Annual St. Louis Storytelling Festival.

Dolores Santha (aka Grandma Coyote), 92 years young delighted our family by sharing tales her father passed down to her when she was just a child. Santha descended from Native American heritage. She is a daughter of a Comanche father and a Seneca mother. Over the years she has participated in powwows and gatherings at schools and educational centers around the country. She has been a police officer, an Indian Center director, an AARP liaison, and has also been a tireless advocate for prisoner rights, having been nominated to be a liaison with Native prisoners in the state of Missouri.

And, good news! There's still time to take part in this unique festival as The St. Louis Storytelling Festival is not just one event -- rather a collection of more than 60 events happening throughout the area May 3rd - 6th. 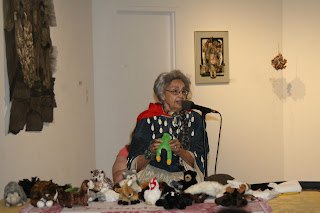 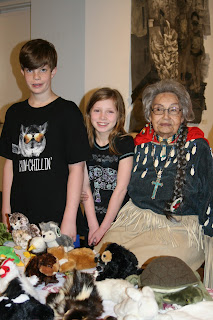 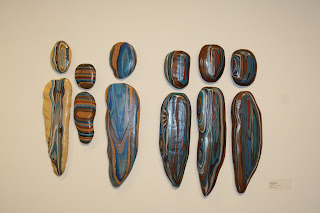 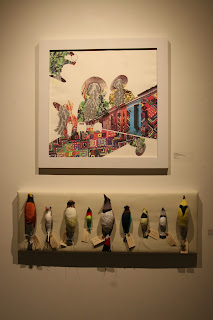 Posted by Andrea at 9:41 PM No comments:

"Mom, I was thinking...if you needed to send a letter to God, you probably wouldn't need a stamp. You'd just put the letter in a Bible. I'm going to try it right now." 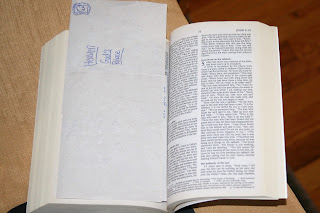 Dear God: Thanks for giving me such smart kids who remind me that you are never far away.
Posted by Andrea at 10:27 AM 1 comment:

In honor of National Siblings Day, I wanted to share something that happened in our house last week between Noah and Natalie. Whether you have more than one child or grew up with siblings - you know where there is great love there are also moments of great frustration. My kids are no different...except that as Noah gets older, it has become more apparent that he will require a guardian and once Steve and I are no longer living or able to continue in that role for him -- Natalie will most likely take over.

This may seem silly to some...it's so many years from now. Why am I even worried about it?
But, I do.
I worry when he is repeating a phrase or random word and won't or can't seem to stop.
I worry when he asks the same question over and over because he wants a different response.
I worry when he has a tantrum over something completely innocuous as running out of sliced bread.
I worry because sometimes...not often, even Natalie has had enough.

Honestly, she is usually the one who can calm him best, but sometimes we all just have to ride it out.
I worry that the responsibility is too big and unfair and...

Last week Natalie got upset with him. She had been making flyers for a dog walking business. Since she can't own a dog (b/c I have terrible allergies) she thought she would borrow one and intended to give the money she earned to an animal shelter.  Noah saw her flyers and said, "In my opinion, your flyers are stupid."
Of course Natalie didn't take too kindly to this. Noah couldn't understand why. He kept saying, "But I said 'in my opinion."
Sigh.
This is the tough part about Autism - taking a concept and then applying it to all situations. For example, hearing someone say, "chocolate ice cream is terrible, but vanilla is delicious. Noah would become defensive because he loves chocolate ice cream. He loves chocolate -- period. I would respond to him, it's okay to like different things. It doesn't mean chocolate is bad. It just means that in her opinion vanilla is better than chocolate. So, he then went on to apply the "in my opinion" idea to everything...even if it was hurtful. He assumed that by adding it -- made it okay.

When Noah put down Natalie's flyers - initially she got mad, but then rather than playing the "who's on first" game with him -- she decided to put her frustration to paper.

She wrote a story.


Once upon a time, there lived a boy named Noah. He farted a lot. He farted when he was sleeping, playing with his sister, and when he was eating too. One day, Noah saw a man in a bright-red tie. “Hello, young man. How would you like to be on Juggling with the Stars?” he asked. Noah’s mouth dropped open. “Oh, yes!” Suddenly, a fart that’s smell could kill and a sound that could make someone deaf erupted from Noah’s bottom. The man with the bright-red tie held his nose. “Oh my, child! You are much too gassy to be on our show!” And he stormed off. Now Noah was very sad. He had a wonderful talent for juggling, but now his chance for fame was ruined. Noah slumped and headed home. He spotted a lady with frizzy hair. “Hello, young man!” She said. “How would you like to be on I Think I Can Square Dance?” “Oh yes!” Suddenly, a fart that’s smell could kill and sound that could make someone deaf exploded from Noah’s bottom. The lady with the frizzy hair turned green. “Disgusting! You are much too stinky to be on our show!” And she stormed off. Noah was feeling pretty bad now. He was an excellent square dancer, and now he couldn’t show off his skills. Noah was very upset. He slowly walked home, kicking rocks in his path. Suddenly, a man with a huge afro ran over to Noah. “Hello, young man! How…” He started. “Oh, no. You don’t want me on your show. I’m much too stinky and gassy.” Noah interrupted. “Perfect!” said the man with the huge afro. Noah stared at the man. “Really?” He asked. “Really! My show isn’t like other shows. It’s called So You Think You Can Fart.” The man with the huge afro said. Suddenly, Noah recognized the man. “Are you Toot Tooter?” He asked. The man with the huge afro laughed. “Yep! Call me Toot.” Noah was overjoyed. Finally, someone to appreciate his talent for farting! Right away, Toot and Noah became friends and Noah won the trophy for Stinkiest, Gassiest, and Most Talented farts. The End. 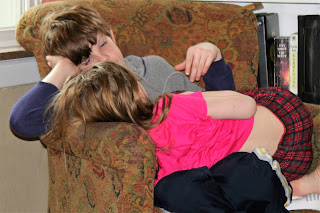 Posted by Andrea at 1:56 PM No comments:

I had to do it. I had to play my highest parenting card to get Noah to his first school dance. He was hung up on the word -- dance. Even though Steve and I assured him he was not required to bust a move -- he wasn't convinced.

This wasn't the first time Noah rebelled over trying something new. It wouldn't be the last.

Over the years I've learned not to ask questions like, "Did you have a good time?" Because his brain likes to focus on less than perfect details so much so that his black and white thinking quickly turns everything dark. Instead, on the ride home I focused our conversation on a safe subject - party food.

"What kinds of snacks did you eat?"
"I don't know."
"Doritos?"
"Yes."
"I heard there was a chocolate fountain -- did you have some chocolate?"
"No, and it wasn't even that big."
"What do you mean?"
"I was expecting it to look like that," he said while pointing to the large fountain sitting outside the local police station.
(Darn it, I needed to steer this conversation elsewhere or he was going to start spiraling down into a dark pit. Before he could go further I said, "It looked like almost every student went."
"Yeah, I played Uno and Spin the Bottle."
"What? You played Spin the Bottle?"

"Yeah"
"Like Spin the Bottle?...tonight?... at the dance?"
"Yeah...but I didn't do that kissy thing."
"What did you do?"
"I played Spin the Bottle Jr....I spun my water bottle and the first two it pointed to I would say they were getting married."

I think at that moment a few new gray hairs sprouted from my head. 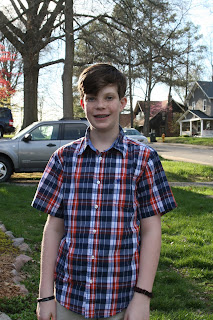 Posted by Andrea at 9:34 AM No comments: