"Mom, for my birthday would you get me a dictionary?...I mean, I know I can just google words, but it's just not as satisfying as looking them up in a book."
Posted by Andrea at 9:31 PM No comments:

Last night as our family pulled into the Grant's View Library parking lot, we were lucky enough to grab one of the few remaining spots. A long line of Star Wars and Cardinals fans snaked along the length of the lot. The featured guests included Ashley and David Eckstein. Ashley Eckstein, voice of Ahsoka Tano was set to talk about her new book, "It's Your Universe" while David Eckstein, former Cardinals player would also be taking autographs.

While I knew Ashley was part of the Star Wars franchise, what I didn't realize was the positive impact and role she has played in supporting girls and women who love sci-fi. She began voicing Ahsoka in 2008 and went shopping for a women's Star Wars t-shirt she could wear to conventions and events, but couldn't find any.  In 2010 she started  Her Universe - the groundbreaking fangirl fashion company and lifestyle brand. She wanted to create items girls could wear every day (not costumes) to express their fandom. Today, Her Universe is a multi-million dollar empire.

In her book, "It's Your Universe - You Have the Power to Make it Happen" Ashley shares her own life lessons, as well as lessons from iconic Disney characters, as a way to inspire girls and boys to create big dreams and work to make them come true.

Noah was so excited to meet "Ahsoka" and have her sign his book. In fact he began reading it right away even though he is not typically a fan of "chapter books" -- he really enjoyed the positive, can-do messages she shares throughout. 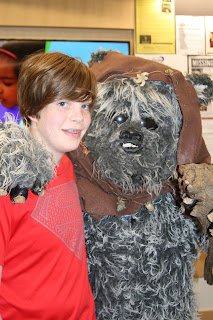 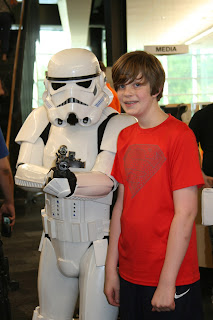 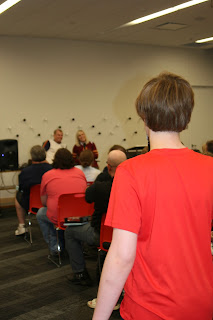 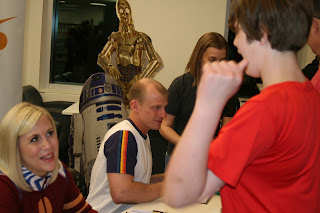 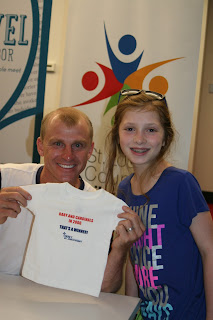 When Nat was born (11/15/06) Mercy Hospital sent us home with a tiny-T featuring the recent Cardinals World Series win. At that time Eckstein was named MVP. He happily signed her shirt.