Noah: Mom, I named my voice crack.
Me: You did...what do you call it?
Noah: Jimmy
Me: As in Jimmy Cracked Corn? Noah, you are too much.
Noah: Who is that? No, I just named it Jimmy because I can.
Posted by Andrea at 1:43 PM No comments:

Me: Noah, I just received a call from Shrewsbury Parks Department -- You got the job!
Noah: Really?...So, I guess it was because of the interview?
Me: Yes! You did a great job!
Noah: Mom, would you email them and tell them it would be an honor?
Me: Of course.
Posted by Andrea at 9:22 PM No comments:

Natalie recently entered the St. Louis County Library's Write Stuff writing contest. She was competing with 6th, 7th and 8th graders and had to create a story 500 - 750 words, based on the following concept: someone wakes up in the morning, and no one remembers who they are. She didn't win the contest, but her story is a winner.

June Who?
The sun rose, roosters crowed, pigs snorted and turkeys gobbled.
June lifted her head off her pillow and squinted at the acres of land she could see through her window. Cattle were scattered across the fields, grazing. She heard footsteps and threw her beloved stitched quilt over her head and pretended she was still asleep.
“Roy! Taylor! David! Get yer lazy bums off yer beds and get up! The cows need a-milkin’ and the chickens have laid eggs during the night and…” a stern voice yelled.
She knew immediately it was her Grandma, from the toughness in her voice and the slow-as-molasses walk. The floorboards creaked, bedsprings groaned, and door hinges squeaked as June’s three eager brothers leaped out of their beds.
“Breakfast!” they sang in a happy, hungry chorus.
The smell of bacon and biscuits and gravy wafted through the hallway and June sighed as she slowly flipped her covers off of her. She put on her favorite button-up shirt and overalls, stumbled into the hallway and into the kitchen. As she slumped into a chair, she realized her family’s eyes were all on her.
“What?” June asked sleepily, snatching a piece of bacon off her plate.
Her Ma’s eyes and mouth were wide open. Roy’s eyebrows were arched. Taylor’s forehead and nose was squished in confusion. David’s face was covered in gravy.
It was Grandma who first spoke.
“Excuse me, do we know you?” she said.
June dropped her bacon. She giggled nervously, thinking her family was just playing a big joke on her.
“Um, I’m June. Remember?
David looked up from his meal.
“I don’t have a sister.” he said, unhelpfully.
Ma slowly backed away.
“Dear, we don’t know who you are.”
June frowned. This joke was getting annoying.
“Guys, quit fooling around.
Ma picked up the telephone.
“Hon, do you know where your parents live? Do you know their phone number?”
June huffed, “Stop! I am June! You know exactly who I am!”
The family shook their heads in unison.
“You...you all don’t remember who I am?” asked June.
David put a messy hand on her shoulder.
“It’s all right, lil’ girl. We’ll find your Ma and Pa soon enough.”
June huffed, “You really don’t know? Are you people insane?”
The family shrugged.
“Unbelievable!” shouted June.
She grabbed another piece of bacon and a biscuit and stormed back to her bedroom, where she hid under her covers, eating her food and getting massive crumbs all over her bed. June sniffled and pulled out her prized storybook, Alexander the Dragon and 525,600 More Stories about Dragons.
A few hours later, Ma walked into her bedroom and sat down on her bed. June poked

up from underneath her blankets, pouting. Ma began to stroke June’s head.

June huffed “So you remember me now?”

Ma smiled, and started to laugh.

“Actually, honey, the strangest thing happened! We were going to call the police to help

us solve this mess, when David noticed something on one of our flour packages!”

“There was apparently side-effects under the list of ingredients! ‘Craving of walnuts,

extreme memory loss (for a few hours) and the mindset of a chicken...’ You better

believe we will NEVER use that flour again!”

June began to laugh, and the two hugged and felt relief. She lifted her head toward her

June’s eyebrows crinkled, “Do I know you?”

Posted by Andrea at 6:13 PM No comments:

They say every dog needs a job. One of Truvy's favorite jobs is to wake up the kids. Each morning after I send Steve off to work, I turn to her to ask, "Do you want to go wake up the kids?" To which she responds by making a beeline for Natalie's room. Once I open the door she begins by nuzzling and licking Nat's face.  But the last two mornings I've noticed neither pup nor child at the kitchen table. When I went to investigate, this is what I found. 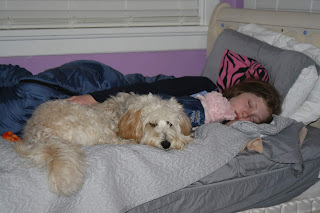