Today the kids and I took advantage of the warmer temps to venture out to one of our favorite places -- the St. Louis Zoo.  While they never tire of viewing the butterflies at the Insectarium or hanging with the chimps at the Primate House, today we spent most of our time at the River's Edge exhibit.  We came to wish Raja, the first Asian elephant born at the zoo, a Happy 21st Birthday.  Every year zookeepers remember his special day by throwing him a party.  They fill half a dozen cardboard gift boxes with his favorite foods including peanuts, popcorn, melons and bananas.


With crowds quickly rolling in, we opted to skip the cupcakes and cocoa in favor of trying a new local confectionary to hit St. Louis  -- Strange Donuts.  A friendly shop nestled in the growing business community of Maplewood. The shop features a dozen different flavors both classic and fanciful creations like Campfire, Fat Elvis and Strange Bacon. 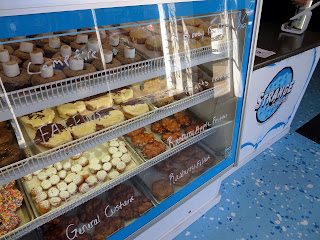 Posted by Andrea at 2:15 PM No comments:

The day before Christmas Eve, our family was thrown a bit of a curve ball.  Noah began the day vomiting -- something I don't remember him doing since he was 2 years old. In fact, he was so surprised by the occurrence, all he could do was sit on the bed in shock and say, "What is this?...I don't do this."

With Christmas plans hanging in the balance, I stocked up on 7-Up, Saltines, Jell-O and Lysol and prayed Noah would make a speedy recovery and that no one else would come down...er, up with it.

Christmas Eve Noah was feeling much better, but wasn't eating much more than dry toast.  Natalie was bouncing off the walls in anticipation for Christmas.  She wanted to go to bed at 6 p.m. in hopes that Santa would stop at our house earlier.

The kids left out cookies, a letter and a box filled with two of their prized possessions - a crystal and a glass bead.


By 9 p.m. both kids were sound asleep. But, it was more than an hour later before Steve and I had our Christmas morning scene set...
presents under the tree - check
Santa sacks and stockings filled - check
Santa letters written and signed - check
cookies eaten - check
coconut wrapped - check

Yes, a coconut.  For months, Natalie, with her zany humor, has been substituting the word coconut into topics of conversation.  For example, "Natalie, what do you want for breakfast?" - "A coconut." "Natalie, how'd you sleep last night?" - "Like a coconut."  So, Steve and I decided to buy one, wrap it and give it to her for Christmas.

I told the kids I wasn't getting up until the first number on the clock was a 6.

At 3:30 a.m. Natalie came into our room to tell me her stomach hurt.

I bolted upright, "What!  Are you going to throw-up? Where's a trashcan?!"

"Then go pour yourself some cereal," I said.

This was followed by an audible sigh from Natalie.  I think she thought if she could just get me up, then she could convince me to let her open her presents.

"That's it! Everyone back to bed," I barked.

Both kids got in their beds without complaint and it was "Silent Night" for Steve and I til 6:55 a.m.﻿

Me: "How is it all of your clothes are so dirty with holes in the knees?"
Natalie: "Oh!  That's because I crawl around on the blacktop. We play cheetahs at recess."
Me: Sigh...Can you still play it without crawling on the ground?"
Natalie: "I know!  I could  put my coat on the ground and crawl on top of that!"

Natalie: "Mom, have you seen my happy sack?"

Hmmm...
Happy Meal?
No.
Sleeping bag?
No.
Hacky Sack!
Yes!
Ding ding ding! We have a winner
Posted by Andrea at 9:45 PM No comments:

Mom:
1.  Good health and fun go hand in hand.
Every inch of skin must be covered in layers of clothing labeled "Thinsulate" 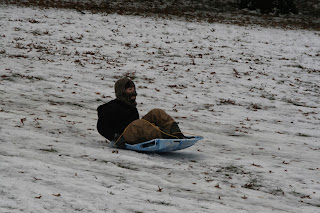 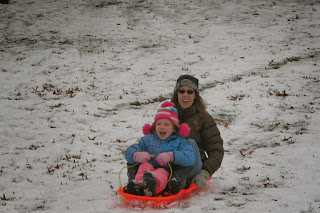 Dad:
1. They have a "Tim the Tool Man Taylor" attitude and can be heard saying things like "With a little water this hill..."
2. They encourage creativity. They give their sleds names like "the rocket" and "the blue bomber"
3. Fun is where you find it.  Catching air while sledding is NOT an accident.
4. They believe in teaching their children about other cultures like sledding "Australian style" 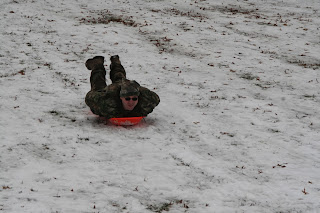 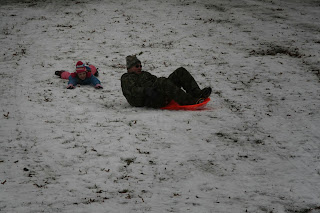 ﻿Today I am thankful my kids have the benefit of enjoying plays from both books.
Posted by Andrea at 10:15 AM 2 comments:

Posted by Andrea at 6:17 AM No comments:

While tucking Natalie in with more than two dozen of her closest stuffed furry friends...
Natalie: "Mom, you don't have any stuffed animals, don't you get lonely?"
Me: "No.  I've got your Dad."
Natalie: "He's like your stuffed animal...only he snores.  Too bad he doesn't have an off button."