Google "meaning of 10" and you'll get more than a million results...

* Sum of 5 + 5, the number 10 represents the two opposite current directions of the conscience: involution and evolution.
* According to H.- P. Blavatsky, the 1 followed by 0 indicates the column and the circle, meaning the principle of the female and male, and this symbol would refer to the Androgyne nature and also to Jehovah, being at the same time male and female.

* 10 is the number from which all things come, and all must return.  It is considered the most occult of all Hebrew letters and is the fundamental and formative number of the Old Testament.
But today, 10 is significant for our family because it represents 10 years of loving one very cute Padawan.

Happy 10th Birthday Noah!  You are 10 times cuter, smarter, sweeter and sillier than I deserve. 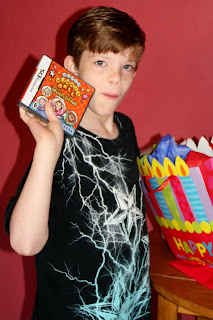 The Fabric of Our Lives

Today I spent most of the day running...errands, and scrubbing floors, and whittling down piles, and retrieving laundry from the basement, but mostly I ran from thinking about the significance of the day.

Today, would have been my grandmother's 97th birthday.  She died on October 21, 2011 and I really thought I was fine with that.  She was 95 and had lived a long life.  She and I didn't have what I would consider to be a close relationship mainly because I had to share her with 35 other grandkids.  Much of what I know of her I gained from observing her.

This is what I know...she was a giver.  Although she came from very modest means, she always made sure each and every one of her 10 children and 36 grandchildren received birthday cards and Christmas cards with money inside.  A devout Catholic, she faithfully tithed and for many years lent her quilting skills to create woven works of art for dozens of church raffles.

She was an empathetic soul...After she died, we discovered a stack of prayer cards six inches thick, representing a lifetime of funerals she had attended for friends and loved ones.

She was a wiz in the kitchen...Thank goodness she passed down her pie baking skills to her daughters.  They are now all gifted at making the flakiest crusts.

She was green before it was ever popular...Empty Cool Whip containers could be washed and reused for storing leftovers and Pringles cans made excellent piggy banks.

She didn't hold grudges...I think part of her secret to living such a long life was that she had an enormous capacity for accepting people as they were and she was able to forgive those who may have hurt or wronged her.

Lastly, she always wore dresses.  In 95 years...she never owned a pair of slacks.  She grew up on a farm and all of her clothes were made by her mother who later taught her to sew.  She passed down her sewing skills to her own daughters, who in later years, helped keep her clothed the way she prefered, by making her simple cotton dresses to wear.

When she passed she did not own many items that would traditionally be considered as valuable.  Apart from the Jesus plate (you know the one with eyes that seem to follow you) she always had hanging in her dining room, I have a few of her favorite every day dresses.  For nearly two years those dresses sat neatly folded in a bag in the bottom of my closet.  That is until I decided that Grandma Marie, the thriftiest woman I ever knew, would not be happy that her clothing was not being put to use.  Since I didn't intend on wearing them, I decided the next best thing to do would be to repurpose them.  I found Betty with Little B Bears on Etsy.  She helped me turn Grandma's dresses into three, adorable, patchwork bears.  I gave one to my Mom for Mother's Day and another to my sister for her birthday.  To me, they are a physical reminder for how Grandma remains a part of the very fabric of each one of her children, grandchildren and even her great grandchildren's lives.  I hope that I can one day leave such a legacy. 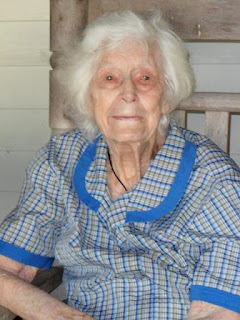 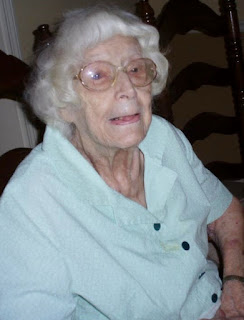 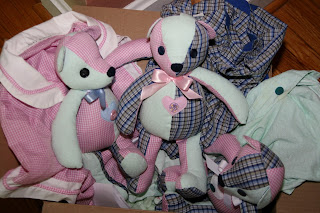 "Happy Muver's Day!" Natalie cheered as I entered the kitchen.  She and Steve were in the middle of making crepes.  "I cracked the eggs!" she proudly shared.

Natalie also set the table and made sure to include a bit of color to the arrangement by placing a single, red German (as Noah called it...better known as a Geranium) in the middle of the table. Both kids gave me cards they had made at school.  When Noah handed me his, he said, "I didn't have time to glue the paper to the card so I just set it inside it.  You can glue it in yourself because you like doing that kind of thing, right?" On the inside of his card was a "Mom checklist". Noah told me he read through all of the items and only checked off the ones he was sure about.

One of the hallmarks of kids on the spectrum is extreme anxiety.  In school and at home, Noah will often hide skills he has gained until he is 110% sure he can perform the tasks perfectly.  He and other kids like him also crave absolutes...and prefer everything to be black and white. Which explains why when faced with the "checklist" he only marked off the things he was confident I was ALL of the time -- loving and kind...I'll take it. 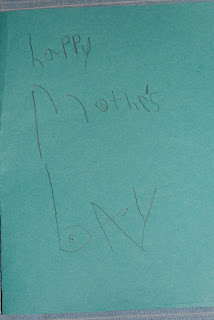 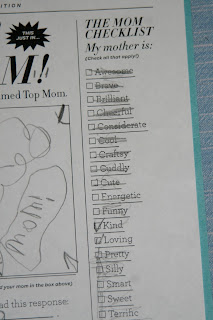 Natalie: "Aww...do I have to go to school?"
Me: "Yes.  Besides it's only for three hours. What are you going to do next school year when you have to go all day?"
Natalie: "Try to get a cold."

You aren't truly a Star Wars fan if you don't celebrate all things from a galaxy far, far away on May 4th.  At our house, I usually observe the day by making a batch of Darth Vader cupcakes.  But this year, our local library put on a fantastic "May the Fourth Be With You" party for us.  Laura Polak, Youth Services Specialist at Oak Bend Library is truly gifted at creating fun ways for kids to extend their learning and just have fun.  My kids and I have had the privilege to take part in many of her programs, but I have to say, she really outdid herself this time.  She began by warming up the crowd with a few quick rounds of Star Wars trivia and encouraged kids to shout out the answers.  Interestingly enough, many of the answers came from Dads who couldn't help but participate. Per usual, Laura was more than prepared to keep a roomful of precocious Padawans occupied.  She set up half a dozen or more activity stations including; creating light sabers, Leia buns and Yoda ears and making Yoda origami finger puppets.  For those in need of more physical activity she offered Empire Strikes Back bowling and a game of Destroy the Death Star in which eager players used Nerf guns to hit a small opening in a cardboard replica of Darth Vader's battle station.

And, the best part...it was all FREE.  Summer is only a few weeks away.  If you are looking for fun, educational and FREE ways to keep your kiddos from climbing the walls, be sure to check out the numerous activities, shows and special events happening at your own area library. 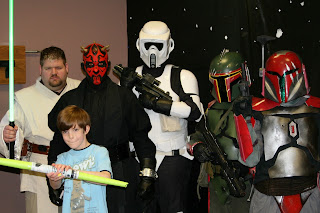 Email ThisBlogThis!Share to TwitterShare to FacebookShare to Pinterest
Labels: library, May the 4th, Star Wars

Wild About the Outdoors

Recently Steve and I took the kids to the Wildlife Rescue Center (WRC), a not-for-profit professional rehabilitation center located near Castlewood Park in Ballwin, Missouri. Noah and Natalie are both members of their Junior Wildlife Program (JWP).  Each month their group, made up of kids ages 6-12, meet to learn about native Missouri wildlife and participate in projects that support the WRC's mission to rehabilitate and care for orphaned or injured animals.  But, this month, their education coordinator, Casey Philips, decided to have them do something different.

In the past they have worked on educational projects like creating play animal habitats out of shoe boxes and materials from the outdoors.  Or, they've been involved in service projects like painting old shower liners in camouflage patterns to keep their skittish patients like turkey, from coming unglued every time a caregiver opens the door to their pen.

This time the assignment was simple: Get outside and play!  It seems in our age of electronics and gadgets that kids have forgotten or in some cases have never been shown how to enjoy the outdoors.

The free-form event began at 12:30 and ran til 4:30.  We arrived on the WRC grounds after lunch and the kids were more than ready to dive into the many stations Casey had set up for them.  One area consisted of a large pile of smooth stones for a stripped down version of Jacks..um, Rocks.  I was surprised how quickly Noah jumped in to give it a try.  Other activities included creating nature collages and using bits of vines and sticks to make mini-rafts that we set sail down the slow-moving creek nearby. Steve, of course, was in his element and Natalie soon became his shadow. While Noah and I took a cheeseball snack break, Steve and Natalie disappeared down to the other end of the property.  When they returned, Natalie rushed up to me carrying her "prized" find -- a portion of a deer jawbone.  You'd think she had won the lottery.

If you live in St. Louis and are interested in having your kids join JWP, click here.  Additionally, they offer wonderful, educational programs for school and scouting troops and birthday parties. Click here for more information.

While exploring in the woods, Natalie and Steve found a deer jawbone...
"Hey! Some of the teeth are kinda wiggly.  I'm gonna put them under my pillow for the tooth fairy and make lots of money!" 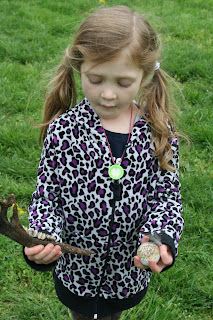 Natalie: "Look!  I found a blue egg on the ground!"
Me: "You should take it into school.  I bet the kids would love it."
Natalie: "Nah, Ian brought in an egg to school before.  The kids will not be amazed by my shell.  I mean, not like if I came to school with 10 elephants in my backpack."
Posted by Andrea at 4:30 PM 4 comments: 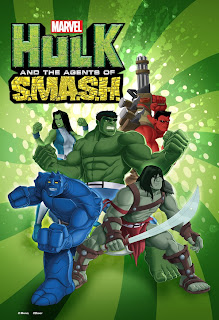 While riding in the car, Noah pointed out that the women next to us was smoking a cigarette.
Noah: "Mom, why is she doing that?"
Me: "Because cigarettes are addictive.  It's a drug."
Noah: "Well, when I grow up I'm not going to smoke because I don't even like fire in my mouth."
Posted by Andrea at 1:45 PM No comments: