The weather was breezy but bearable on Friday as we kicked off our first day of Spring Break. We teamed up with a bunch of friends to enjoy the morning at one of our favorite local attractions - The St. Louis Zoo.  One of the really great things about our zoo is how many of the exhibits are indoors - making the weather no big whoop. 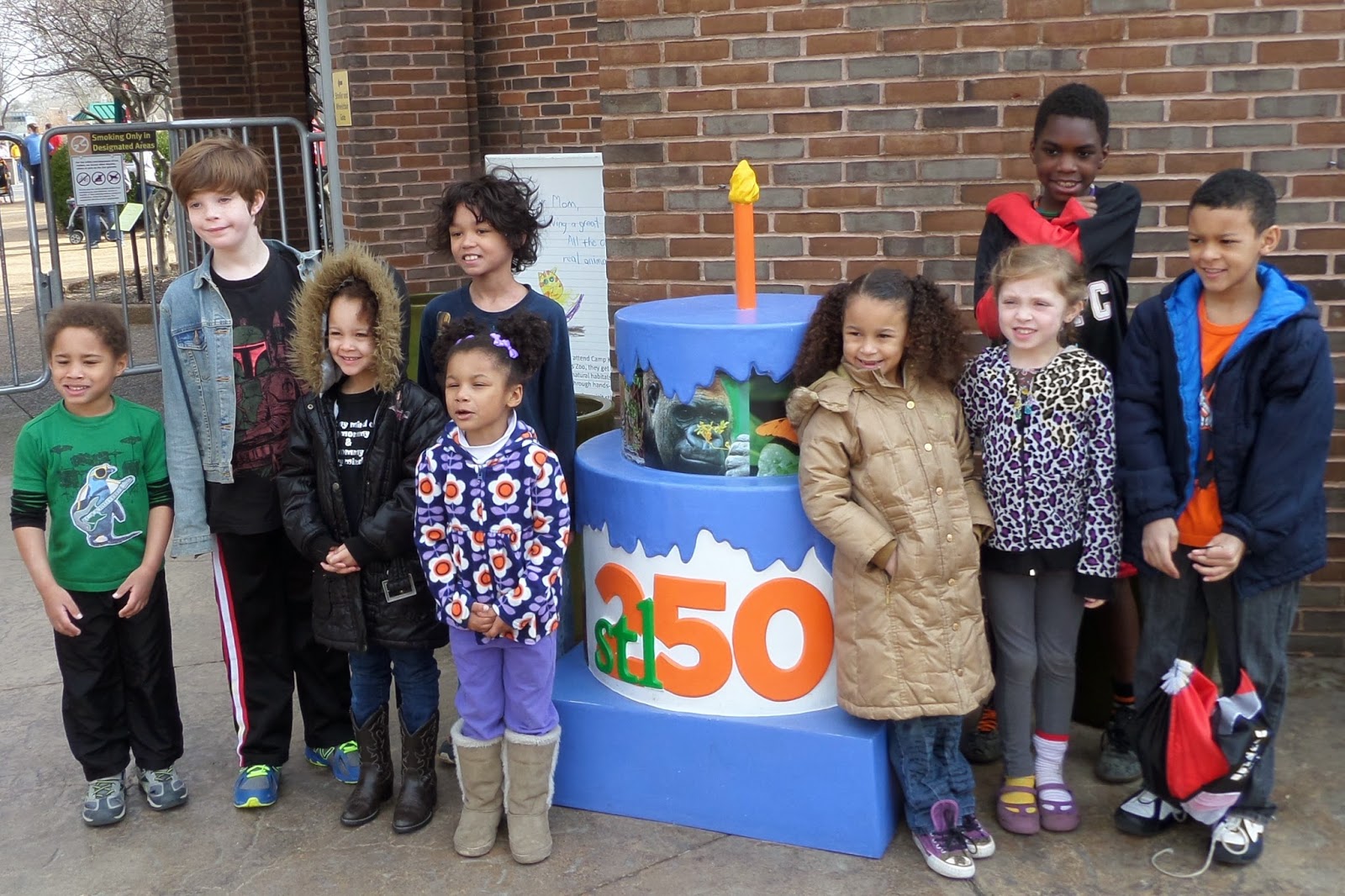 On Saturday the sun came out and the temperatures soared to 70 degrees, but Natalie and I spent most of the afternoon under black lights as she had been invited to a classmate's cosmic roller skating party.  She had a blast being with her friends while skating to her favorite tunes like "What does the Fox say?" and Fharrell Williams'  "I Feel Happy".

On Sunday, St. Louis lived up to it's fickle weather reputation and temperatures dropped to 34, but with the wind it felt like 19 degrees.  By 10 a.m. it was sleeting and I was forced to cancel our Daisy troop's fieldtrip to World Bird Sanctuary for World Eagle Day.  Instead we headed to the movies to see The Lego Movie.  Noah had been watching the trailers for months and reminded me daily how much he wanted to see it with his rendition of "Everything is Awesome!"...Though now that he's actually seen the movie, we mostly just hear, "Honey, where are my paannnnnnnnts?"

Monday was gray and cold and I had a killer headache.  I mostly caught up on laundry. In the evening Steve and I went to our swing dance class.  We aren't the best, but I'm fairly certain we have the most fun of anyone in the group.  If there were a prize for laughing...we'd certainly come in 1st place.   That night we learned a new move called the American spin.

On Tuesday the sun came back out to play and we met up with friends at our neighborhood park.  Natalie was thrilled to see so many of her school friends.


On Wednesday we scurried out the door by 8 a.m. but not before loading up our car with a myriad of "must haves" including two scooters, three light sabers, both kids' Nintendo DS systems, 5 books, a foot bath and a dozen or more bottles of nail polish.  I considered the kitchen sink, but then thought better of it.  We were headed south to my folks' house who live about 30 minutes from us in Oakville.  Noah spent the day dividing his time between x-box and Legos.  Natalie set up a spa shop in Grandma's kitchen and went to town giving me a manicure and pedicure.  It was a relaxing day, but windy and cool which kept us indoors all afternoon.

That evening Natalie spied the calendar and noticed Thursday was the first day of spring.  She then decided to organize a "happy spring" party for us.  First, she made a list. Next, she holed herself up in her room for more than an hour.  When she emerged she showed me the flower cut-outs she had created. On the backs of each one she wrote a category -- music, decorations, crafts, food and games.  Then she put each flower into a box and had us take turns pulling one out. I drew decorations.  Natalie was thrilled when she pulled games because she already knew what she wanted us to play.  Noah got food -- which he pretty much took to mean that I would make something sweet and chocolatey and he would take responsibility for eating it.  Steve got music which was good because he's not all that crafty.  In the end, Natalie decided we didn't need crafts. 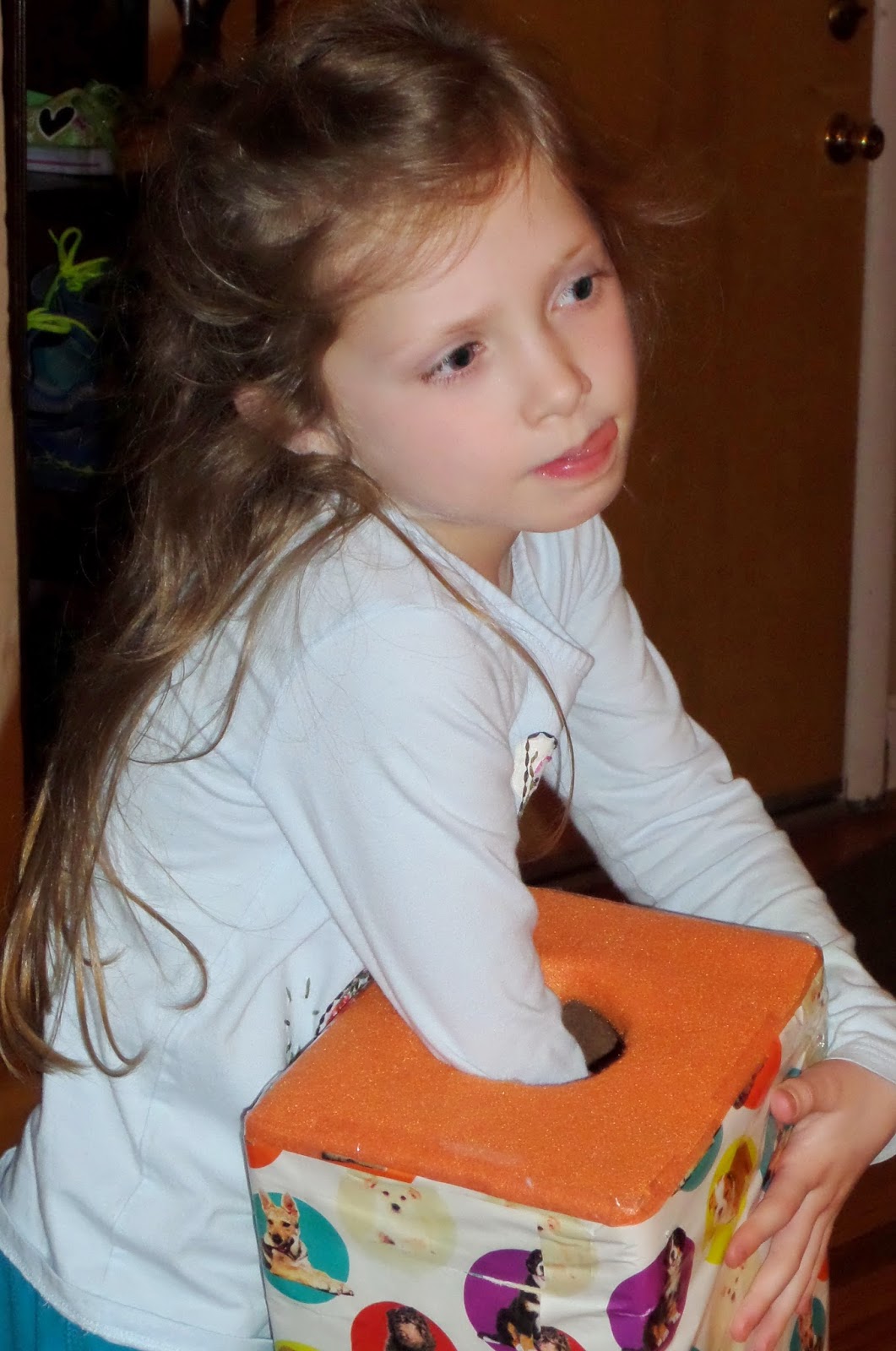 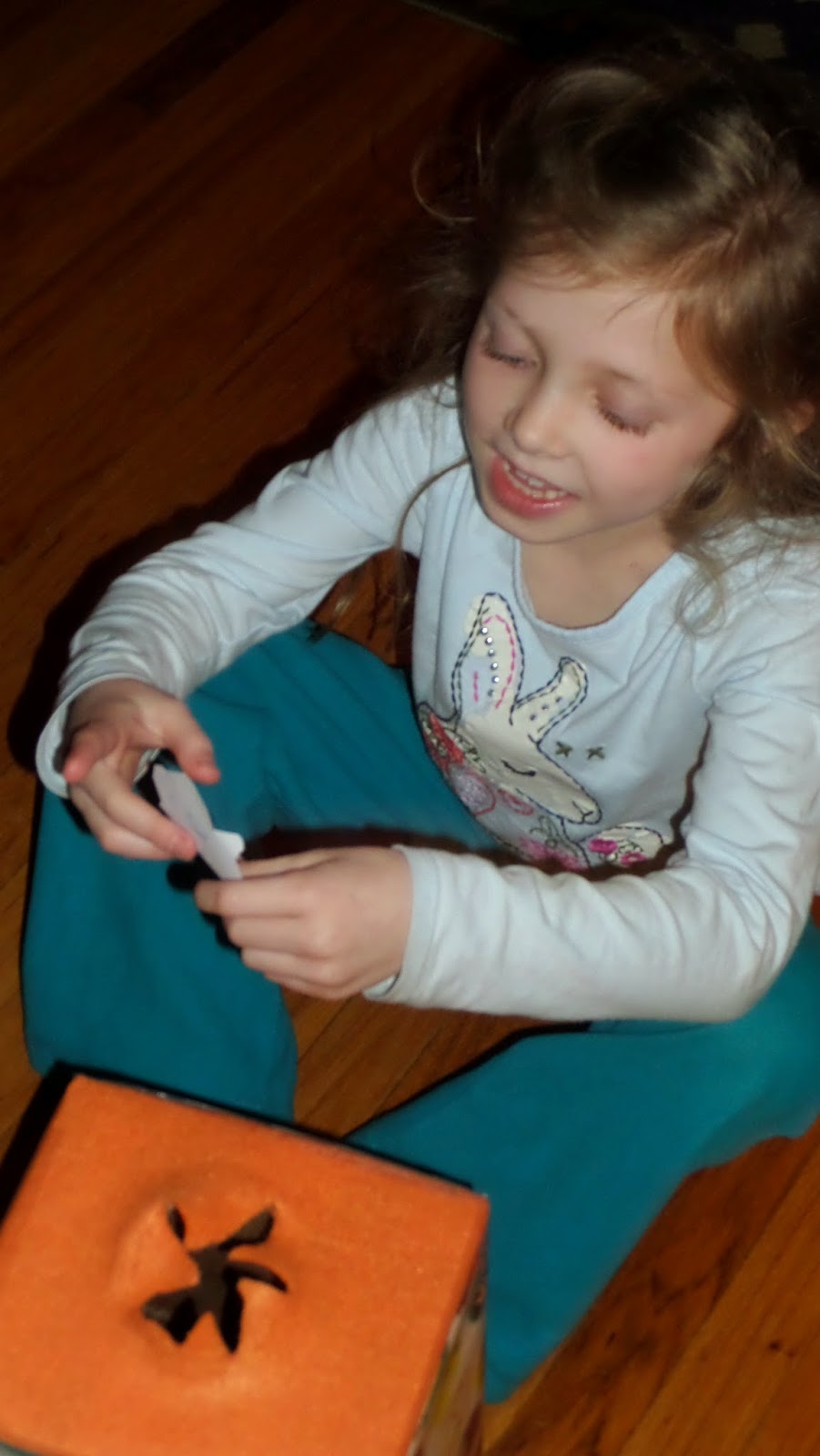 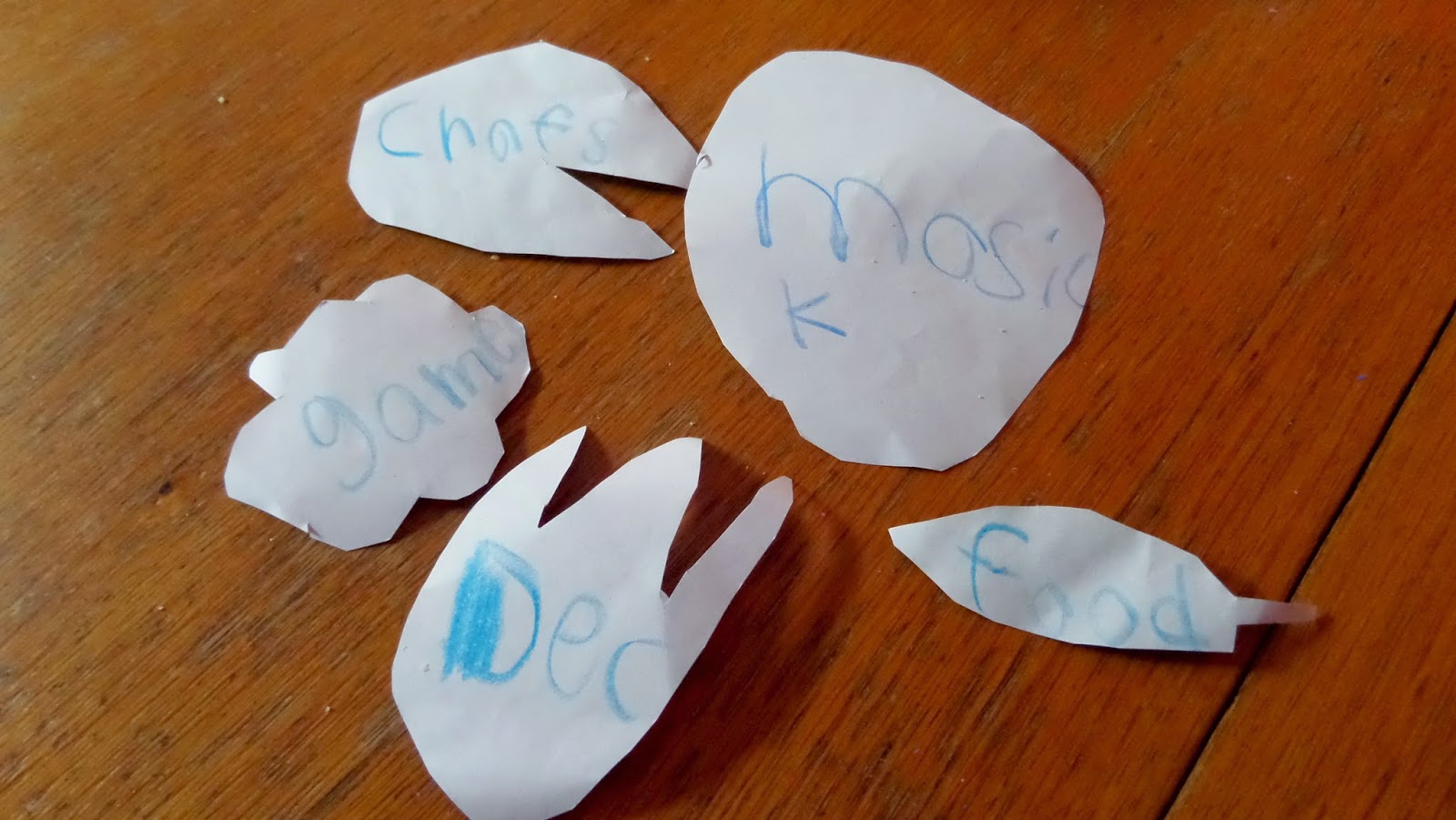 With a party to plan, we got a later start than usual.  By the time we left the house it was 11:30 and the kids were hungry. Saves-a-lot-Noah wanted to treat us to McDonald's and we spent the first day of spring outside enjoying Happy Meals and exploring the grounds of Laumeier Sculpture Park. 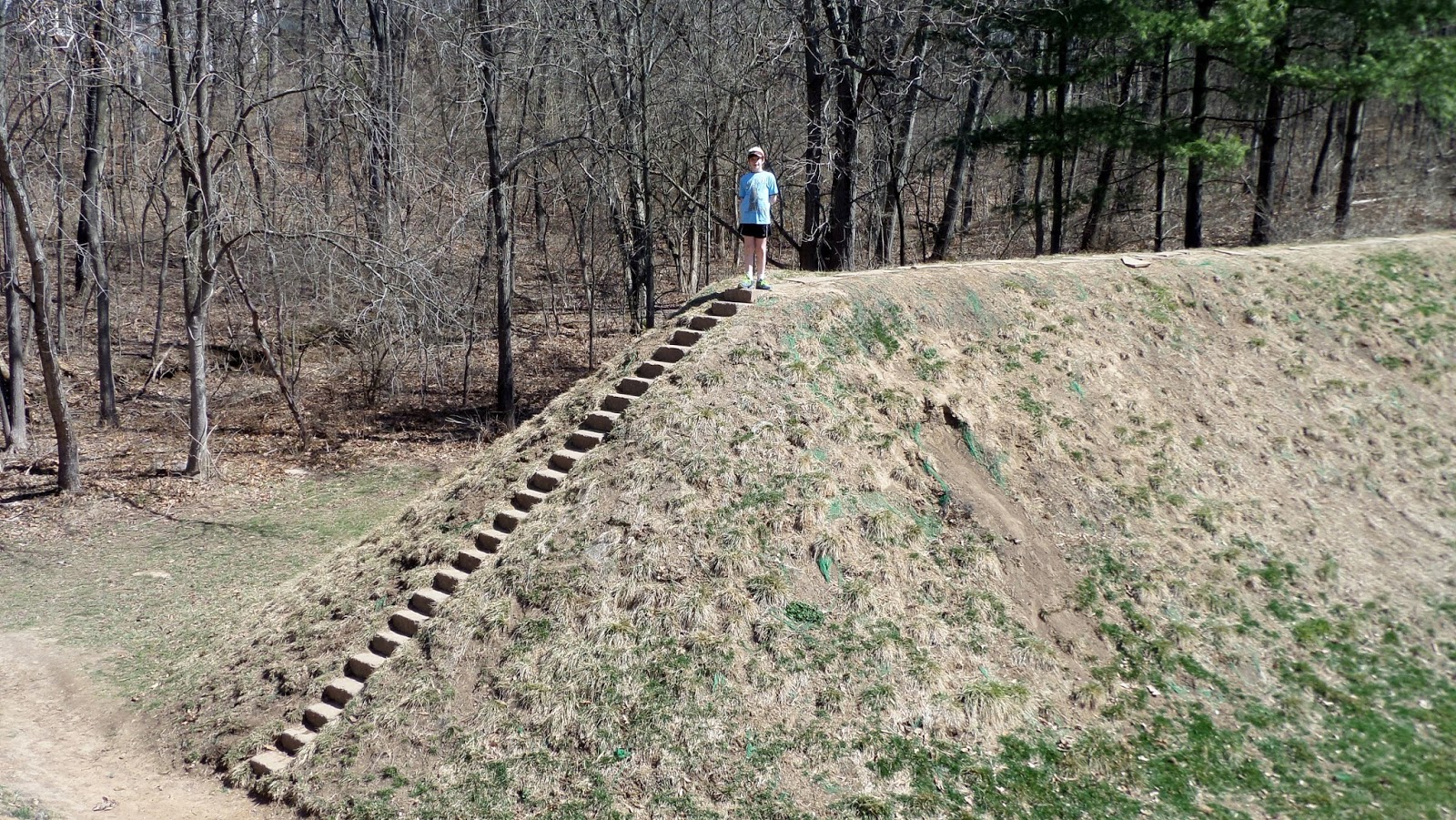 After dinner, Natalie couldn't wait for us to get the party started.  Noah became a willing participant once he learned chocolate chip cookies were involved.

On Friday Steve took the day off work and we headed to the Sophia M. Sachs Butterfly House at Faust Park for March Morpho Madness -- a time when they release 10 times the number of these bright blue beauties.  Open since 1998, the 8,000 square foot glass conservatory is home to more than 60 species -- in total between 1,800 - 2,000 butterflies at any one time.  During our visit we also watched a short, 17 minute movie called "The Butterfly Effect" which explains the life cycle of butterflies as well as their impact on our environment.  Later, Natalie and I spent some time in the Lopata Learning Center which features a cute book nook filled with dozens of books on butterflies and other insects along with several areas for working various kid-friendly puzzles.  Afterwards we grabbed a picnic table to enjoy lunch in the sunshine.  Since the park was extremely crowded, we headed back towards home, but not before making a couple of stops.  I made sure to leave room for dessert so that we could visit St. Louis' favorite frozen custard since 1930 -- Ted Drewes!  Each of us has our favorites.  For Steve, it's always the "All Shook Up", for me either the "Dottie" or "Terramizzou", while Noah is old school with a Reese's cup concrete, but Natalie always keeps us guessing.  This time she chose a mint Oreo concrete. But, no matter what you choose, you are guaranteed to leave happy.
﻿ 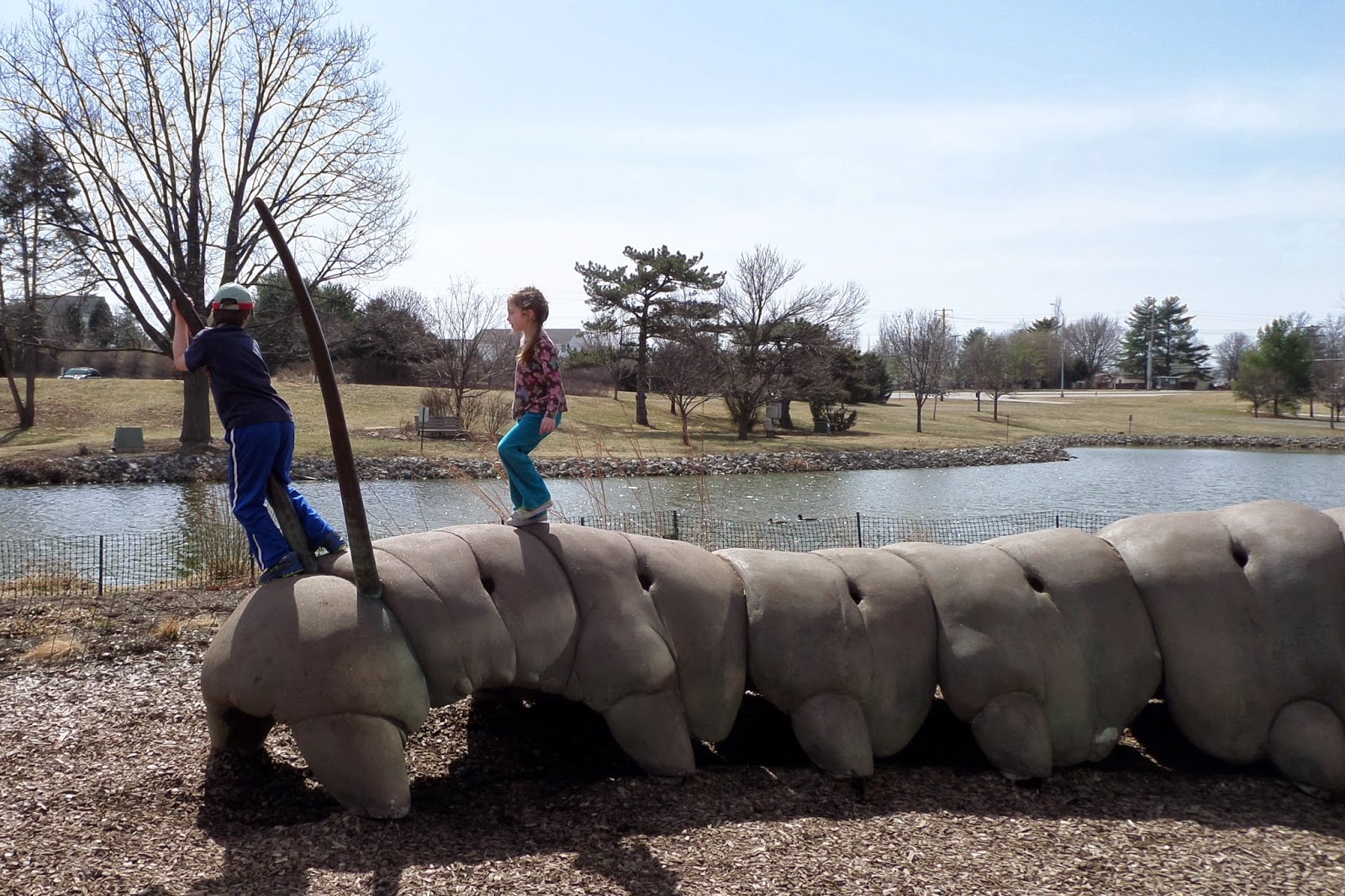 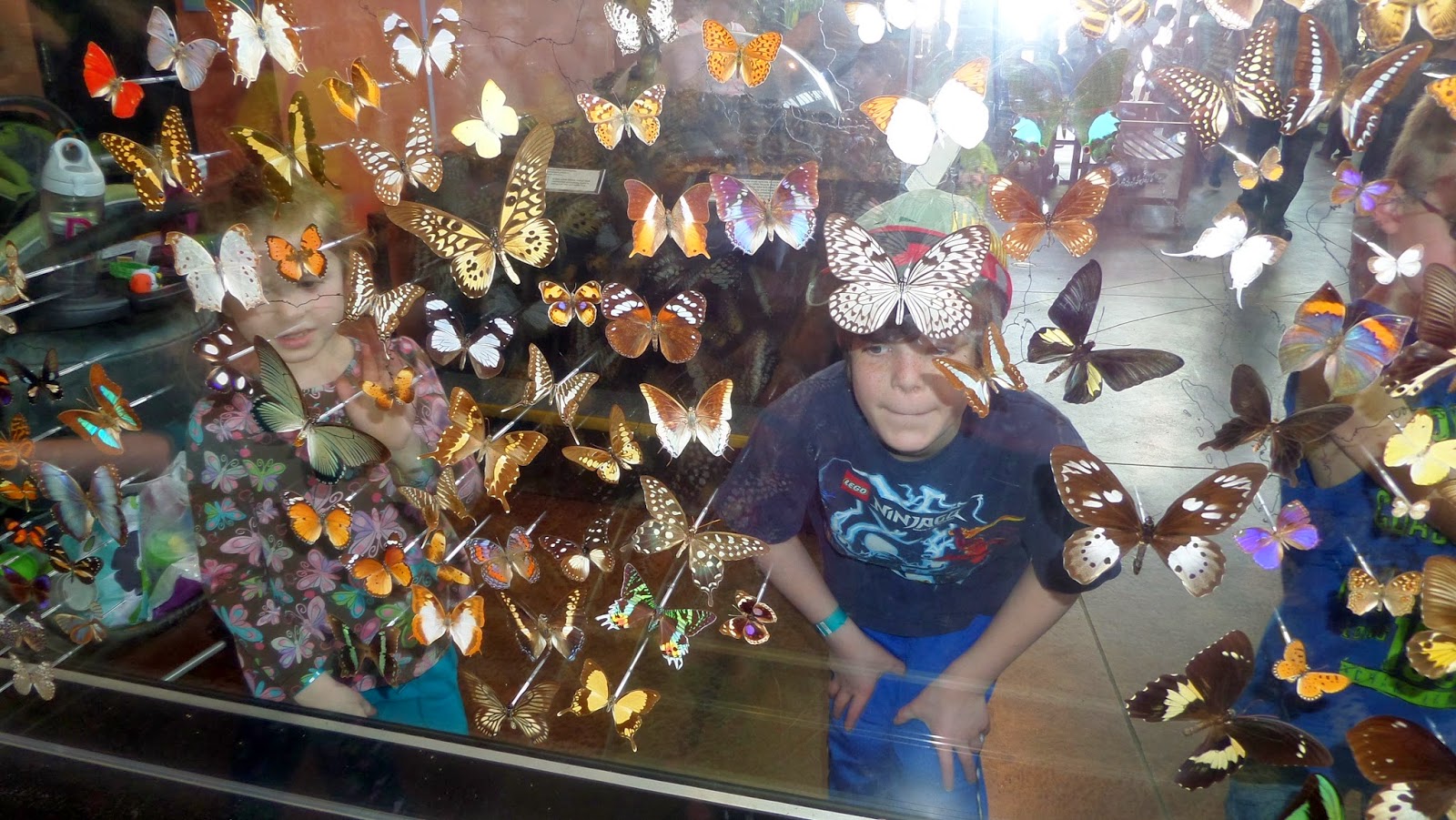 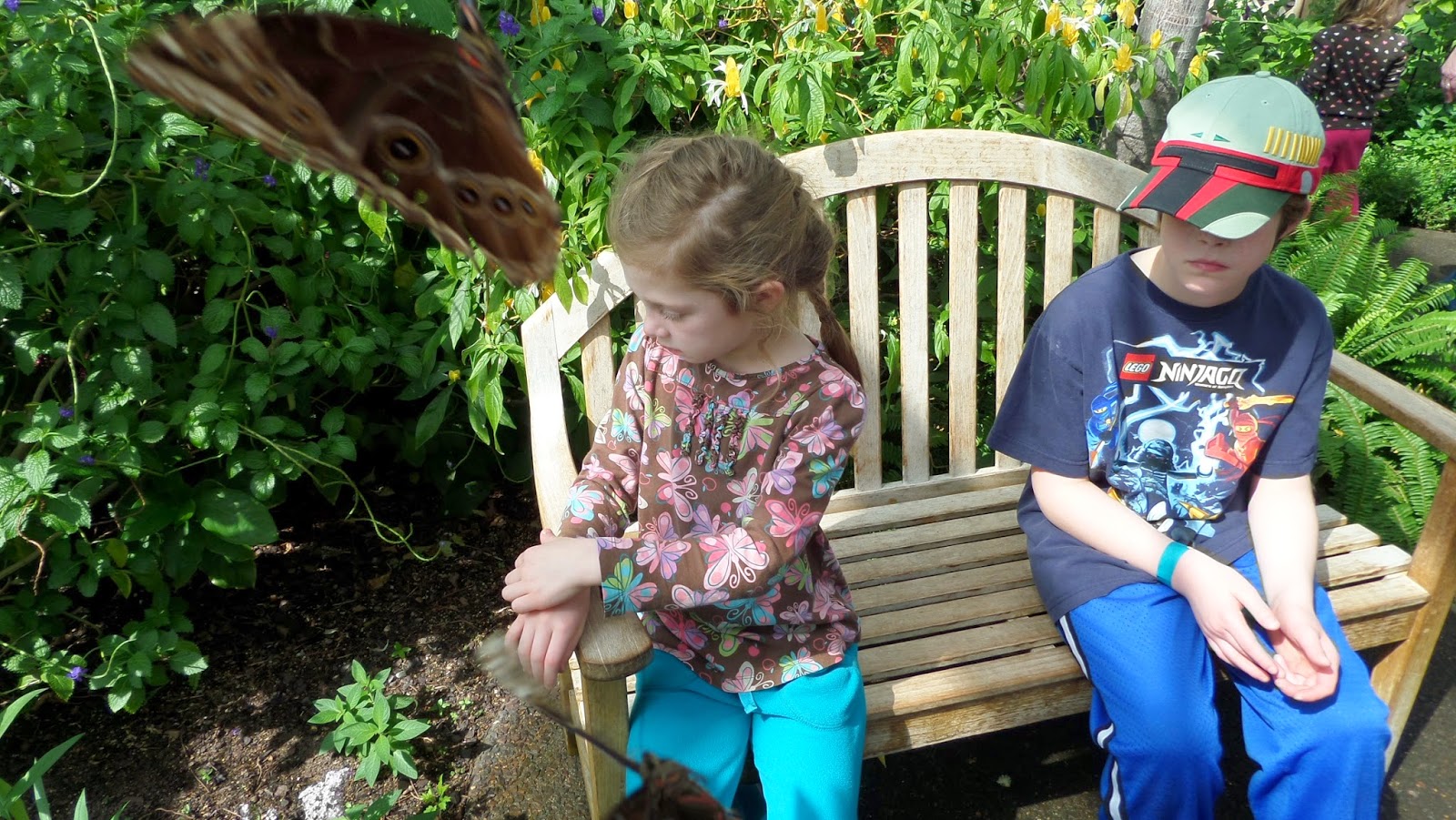 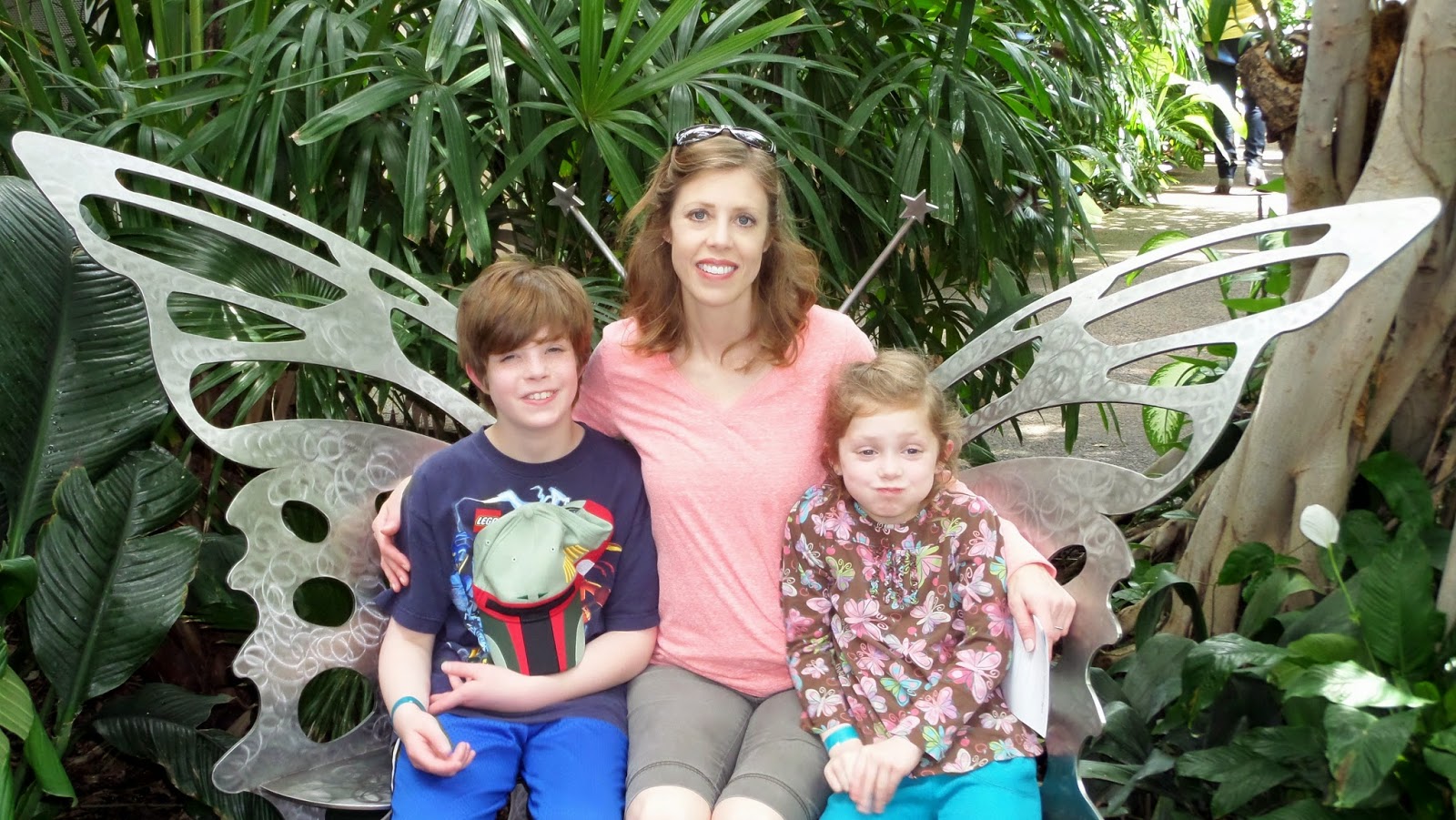 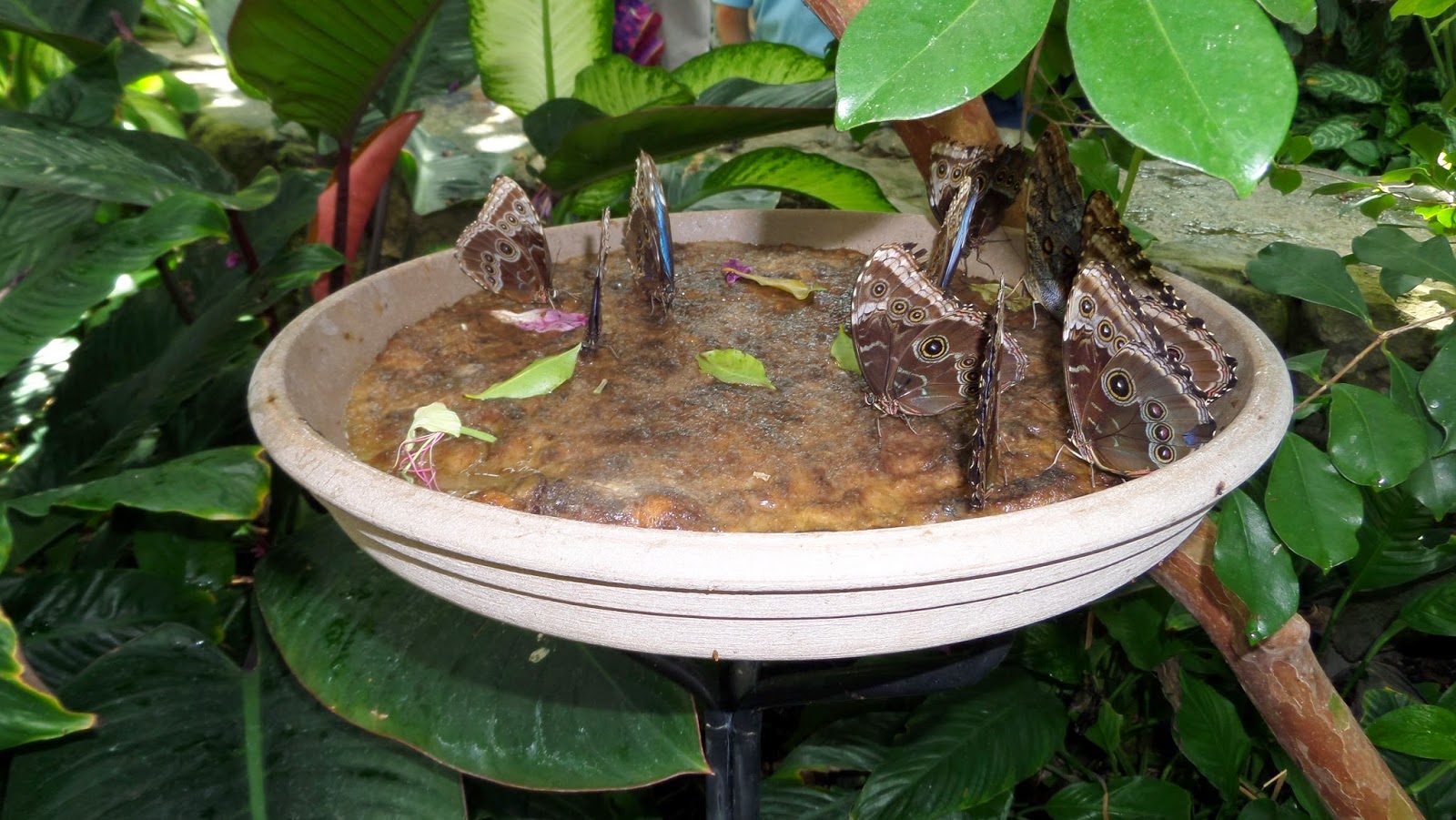 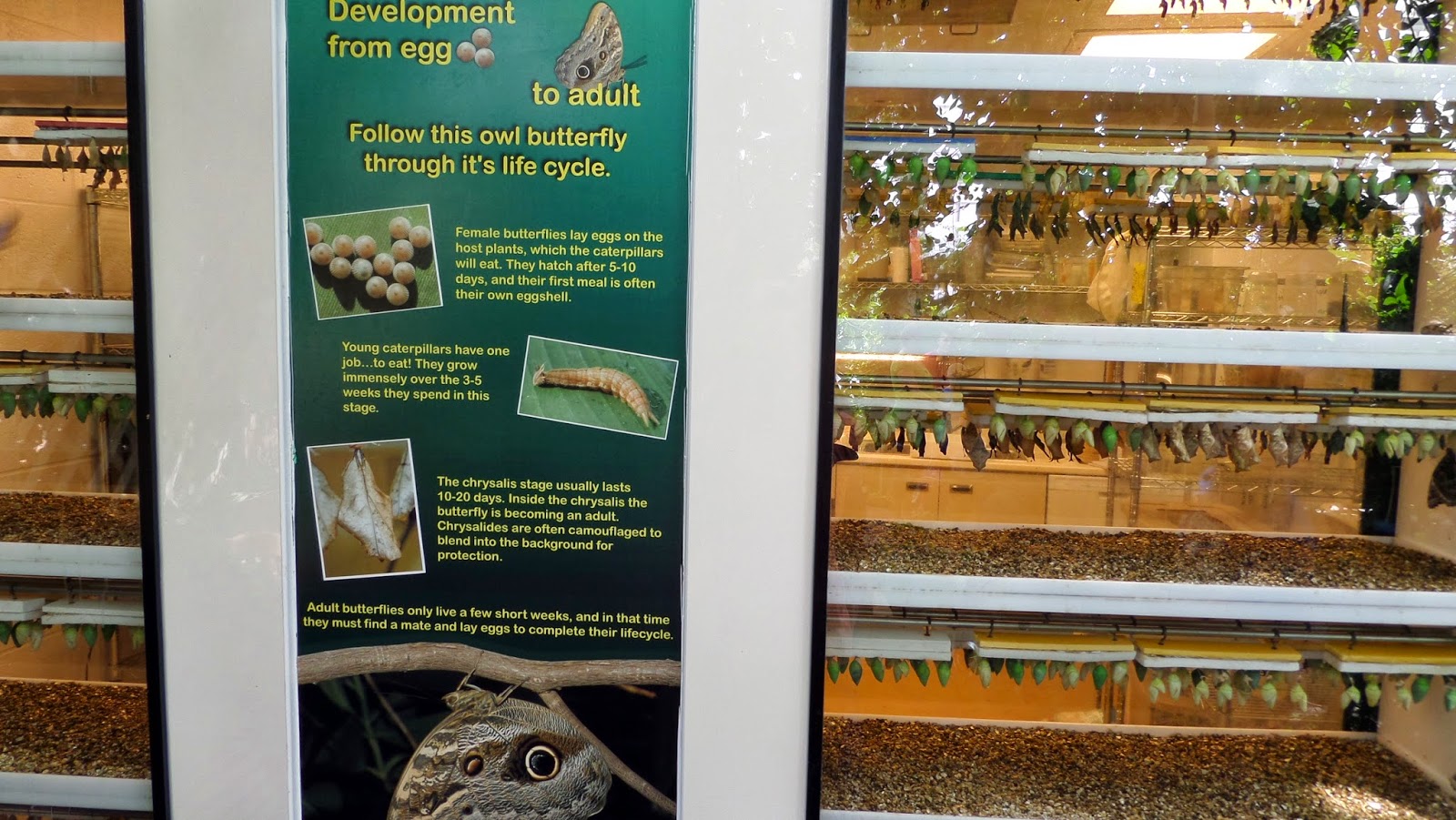 On Sunday "I can't believe Spring Break is over" day, we celebrated Natalie filling her sleep chart with a week's worth of sleeping through the night by taking the kids to see the movie, "Mr. Peabody and Sherman".  While we don't normally see movies more than a few times a year, I was happy to take her...as prior to that week, I had racked up quite a sleep debt.  The movie was really sweet and of course Natalie who claims, "my life would be perfect if I just had a dog" loved the movie especially the theme that every dog needs a boy.  And, it wasn't just our kids who enjoyed it.  As the movie ended, many in the theatre began clapping.  It's been a long time since I've witnessed that kind reaction from a movie.

All in all it was a great week.  The kids and I really enjoyed the time off from rigid schedules and homework.  But, the teasing spring temps have left me impatient for more outdoor adventures...more cakes to find and places to visit. Only 58 days left til summer vacation!

Posted by Andrea at 9:03 PM No comments:

A Seed Has Been Planted

"Grandparents, like heroes, are as necessary to a child's growth as vitamins."
Joyce Allston

A few weeks ago my folks made a surprise visit to our house and offered to take the kids to see Art in Bloom at the St. Louis Art Museum.  While I was thrilled for my children to have this rare one-on-one time with my parents -- neither kid was convinced they would enjoy the excursion.  For weeks I had been trying to get our family to visit the museum during their "Family Sundays".

Every Sunday afternoon The St. Louis Art Museum invites families to drop in between 1 p.m. and 4 p.m. for hands-on art activities and a lively 30-minute tour through the Galleries.

But, each time I broached the subject, the kids put on an act that would make even
SNL Whiners cover their ears. So, being the democratic parent that I am, I gave them a choice -- visit the museum with their grandparents or stay home and scrub floors and clean the toilet with me.

As the kids made a bee-line to their grandparent's car -- I pulled my mom aside and told her "thank you, good luck...see ya in an hour."

She brushed off my comment and confidently pointed her chin at my camera sitting on the table, "I need a camera."

In that moment I knew, she had fully accepted the challenge and would use her super-powers that only grandparents possess -- to make sure my kids not only had a good time at the museum, but would want to return again. And, she planned on bringing home proof of it.

While  their car pulled out of the driveway, I waved and breathed a sigh knowing she would work her magic once again as I remembered she is the same woman who taught my picky, "I only like processed meat and cheese" son to try and LOVE hummus.  She's also the same person who convinced my nephew (2 at the time) that green beans were really just green French fries...the Art Museum would be no big whoop.

In the end, Natalie truly loved the exhibit, made up of more than 30 floral interpretations of artistic masterpieces.  She really "got it" and enjoyed sharing with her grandma what similarities she found between the floral arrangements and the art.  And while Noah wasn't as excited about the displays, he did enjoy viewing the mummy collection and various battle armor exhibits.

Thanks Mom and Dad for helping me plant the seed. 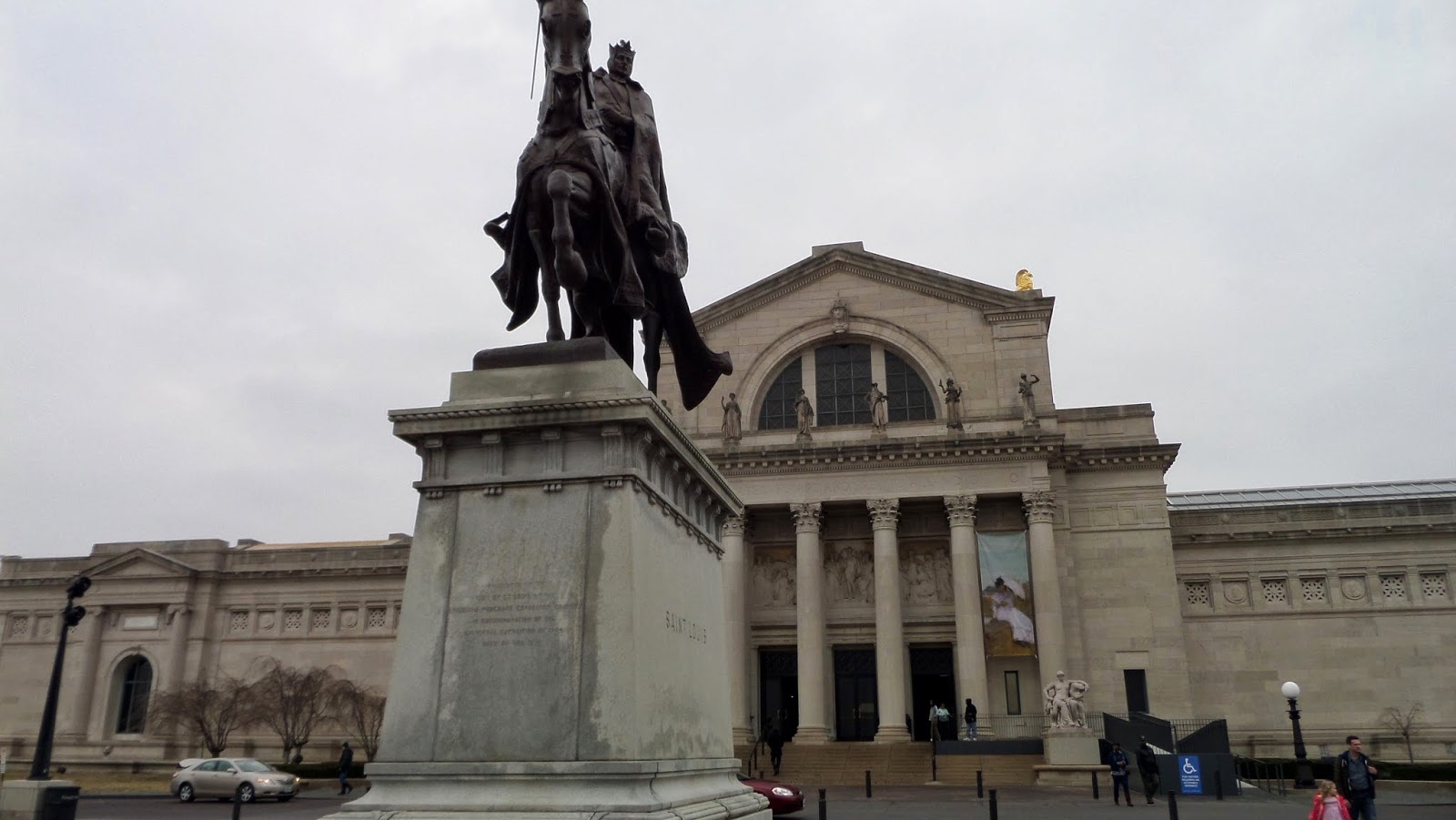 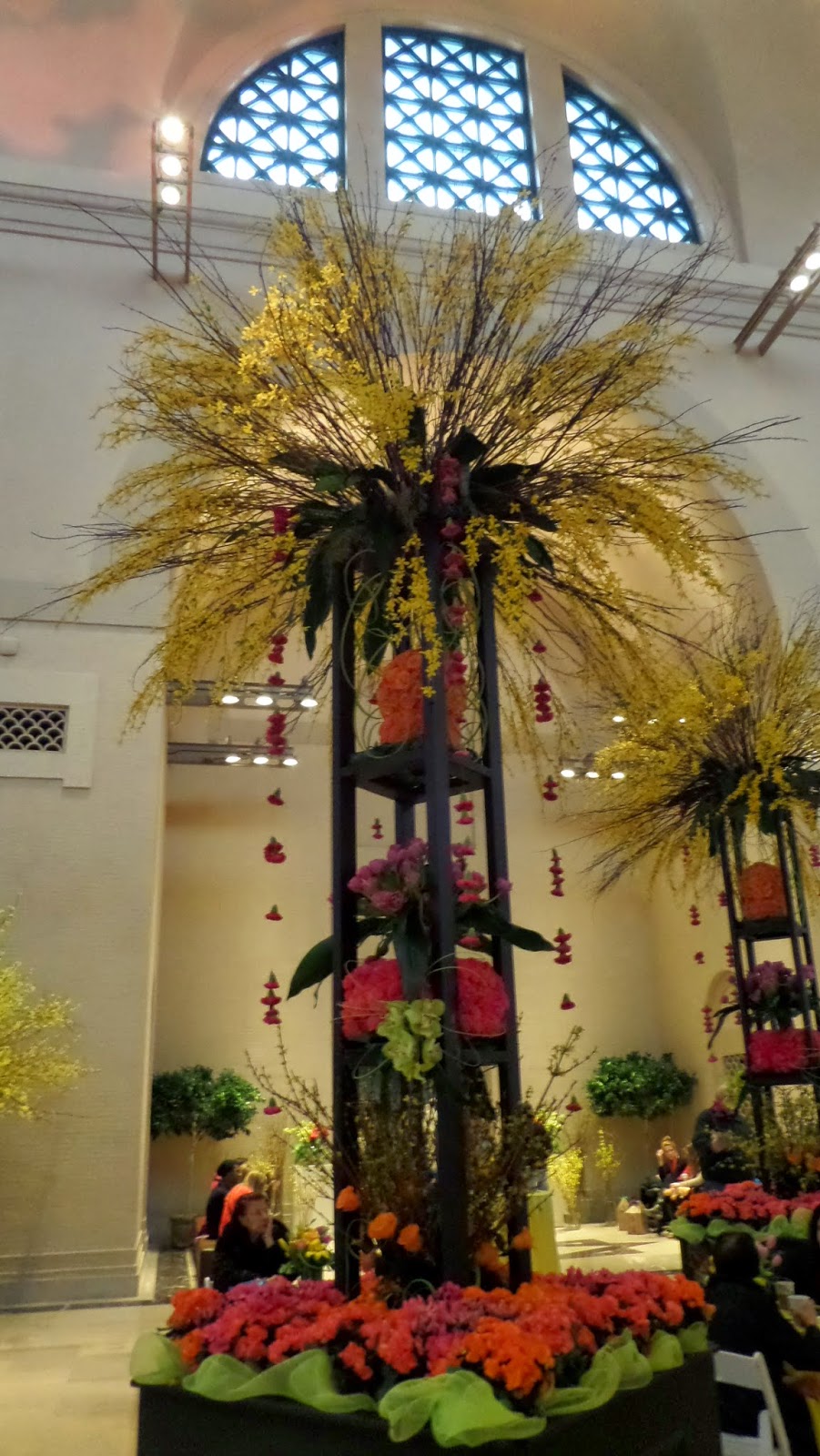 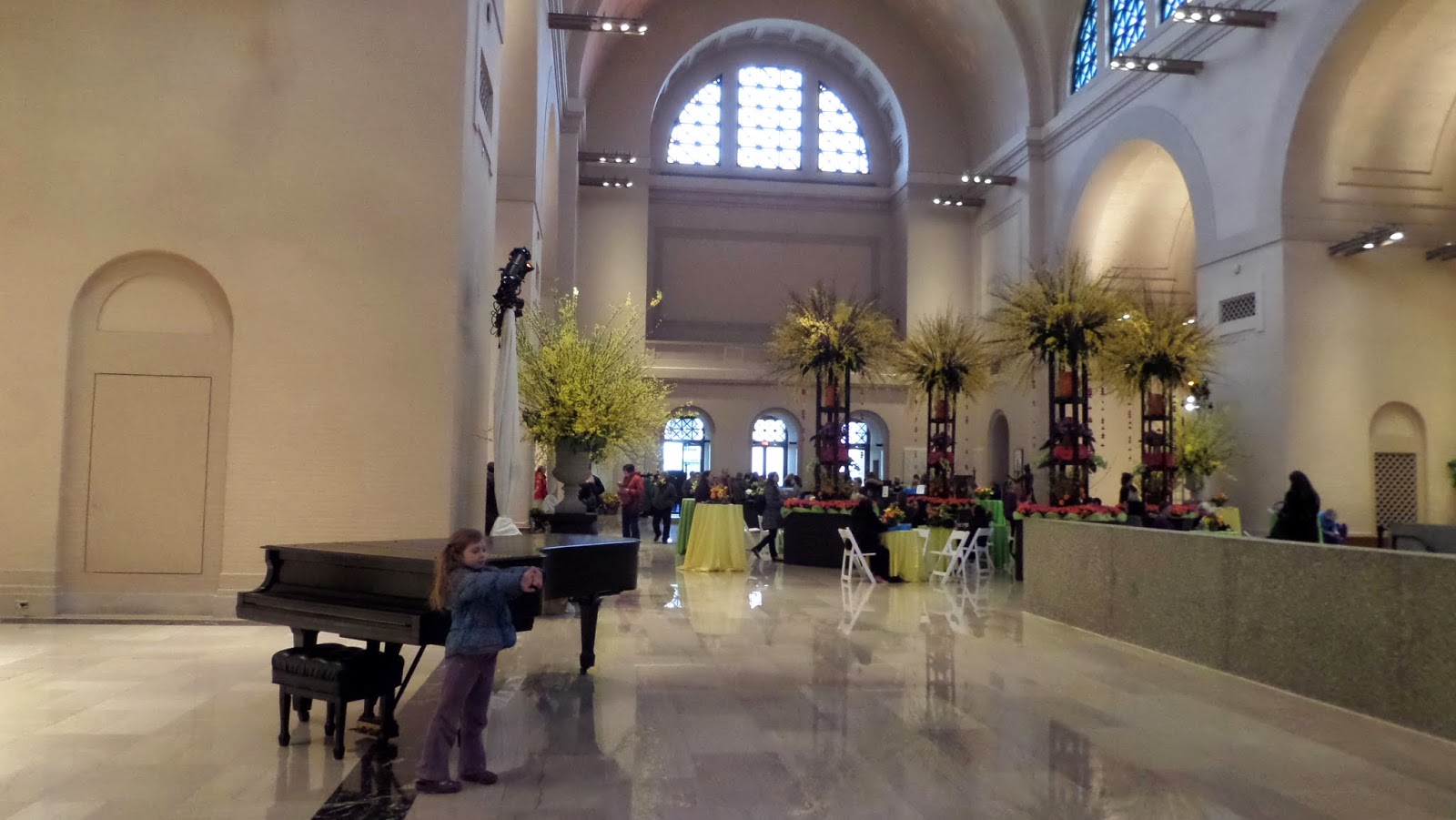 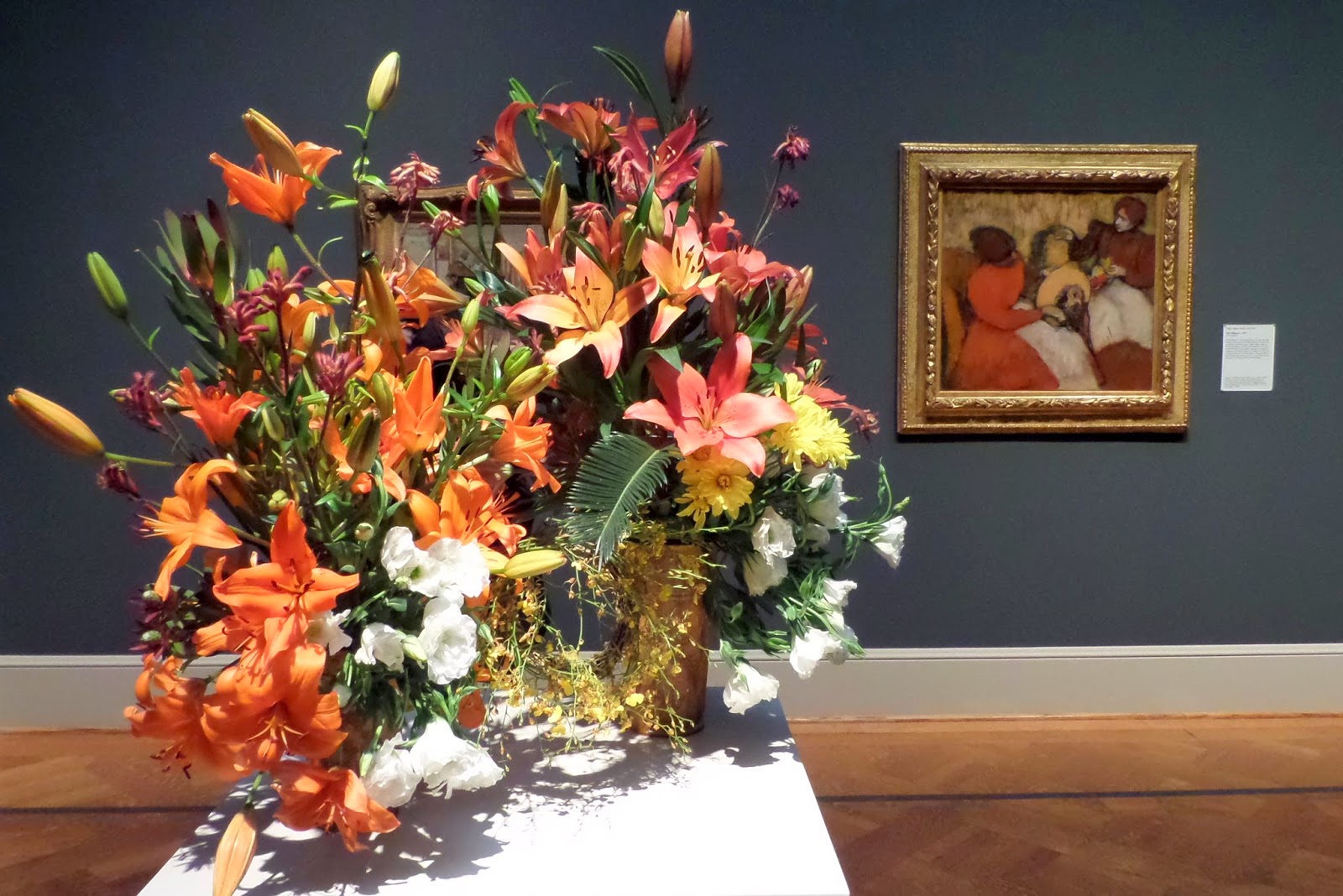 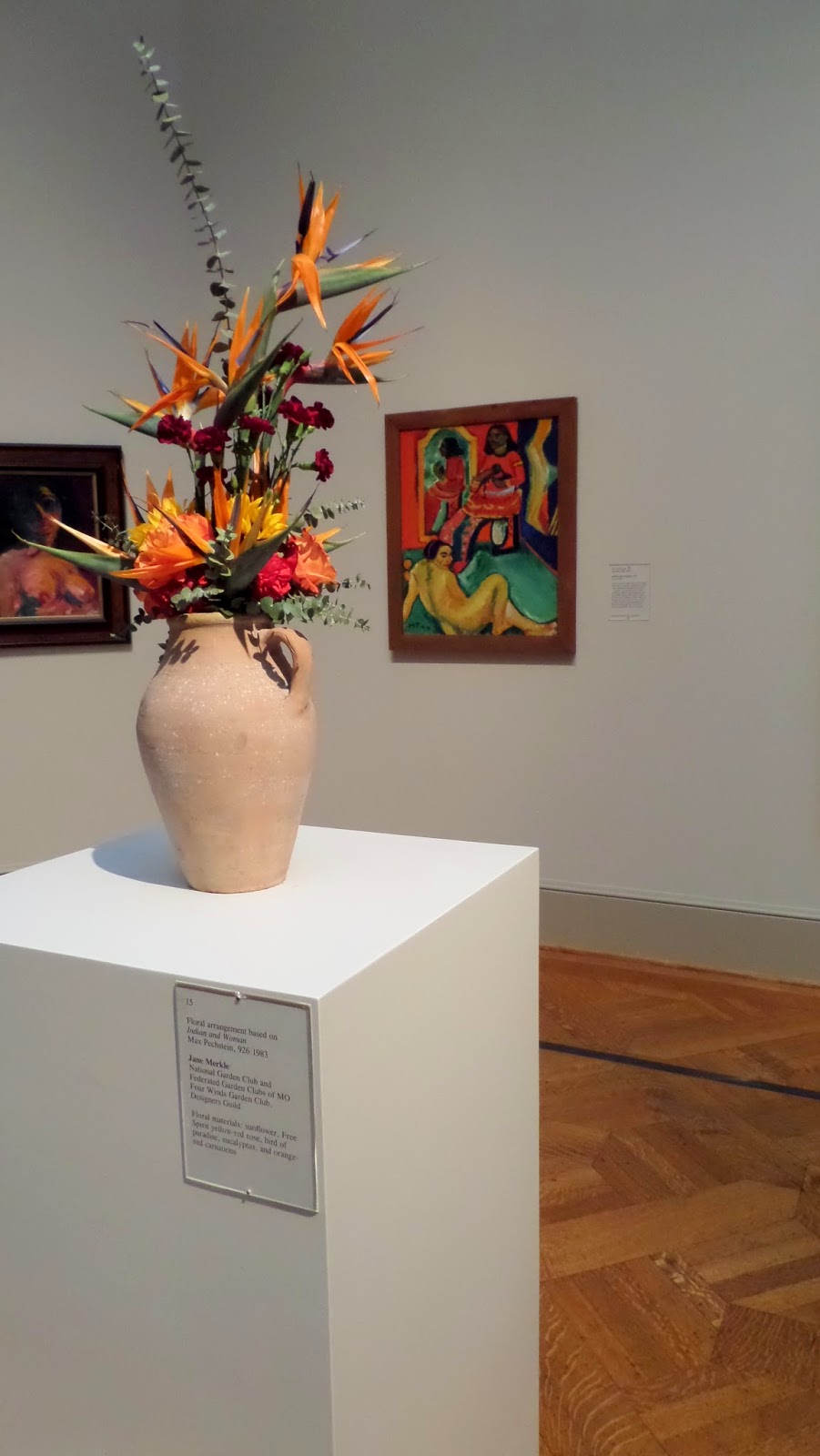 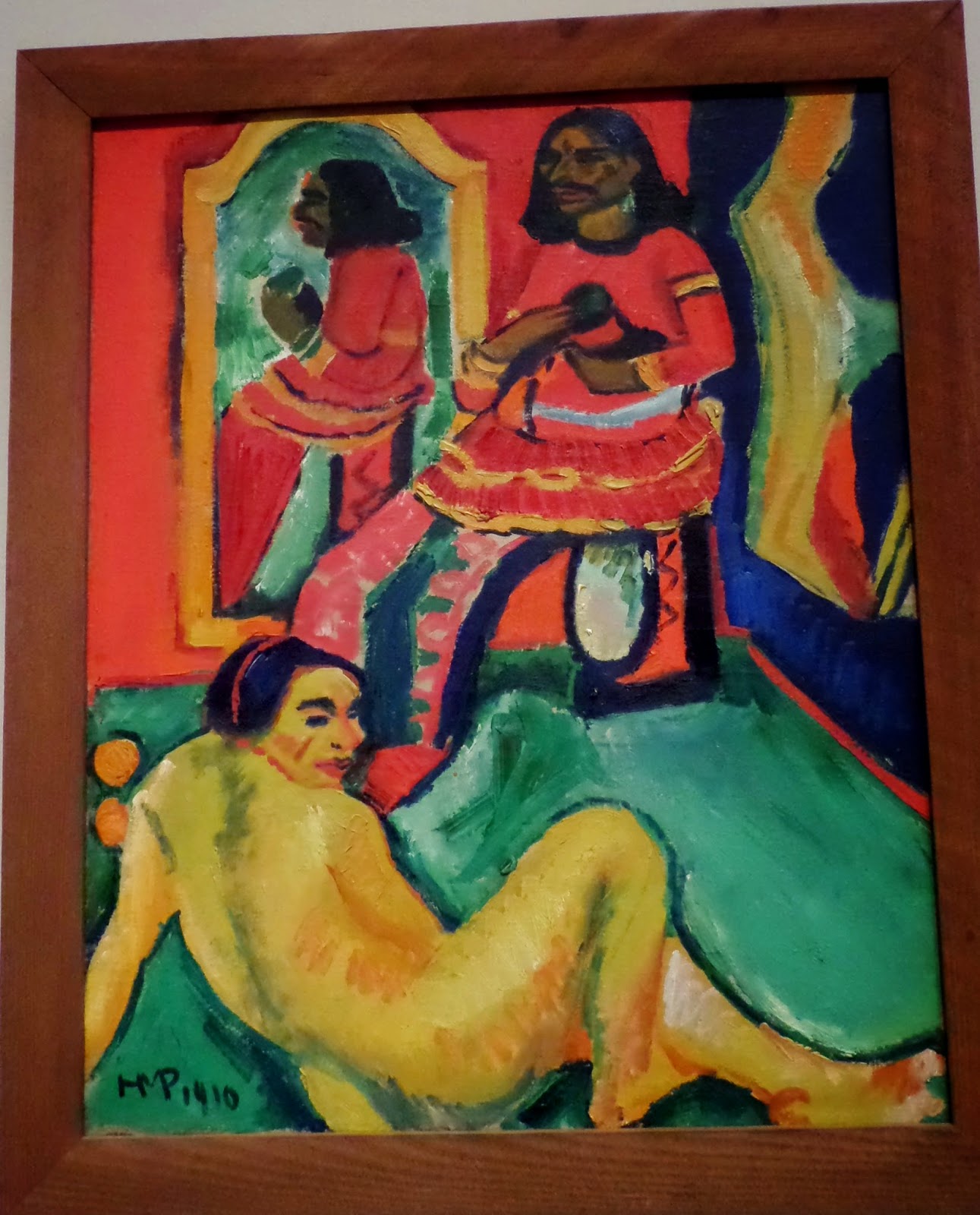 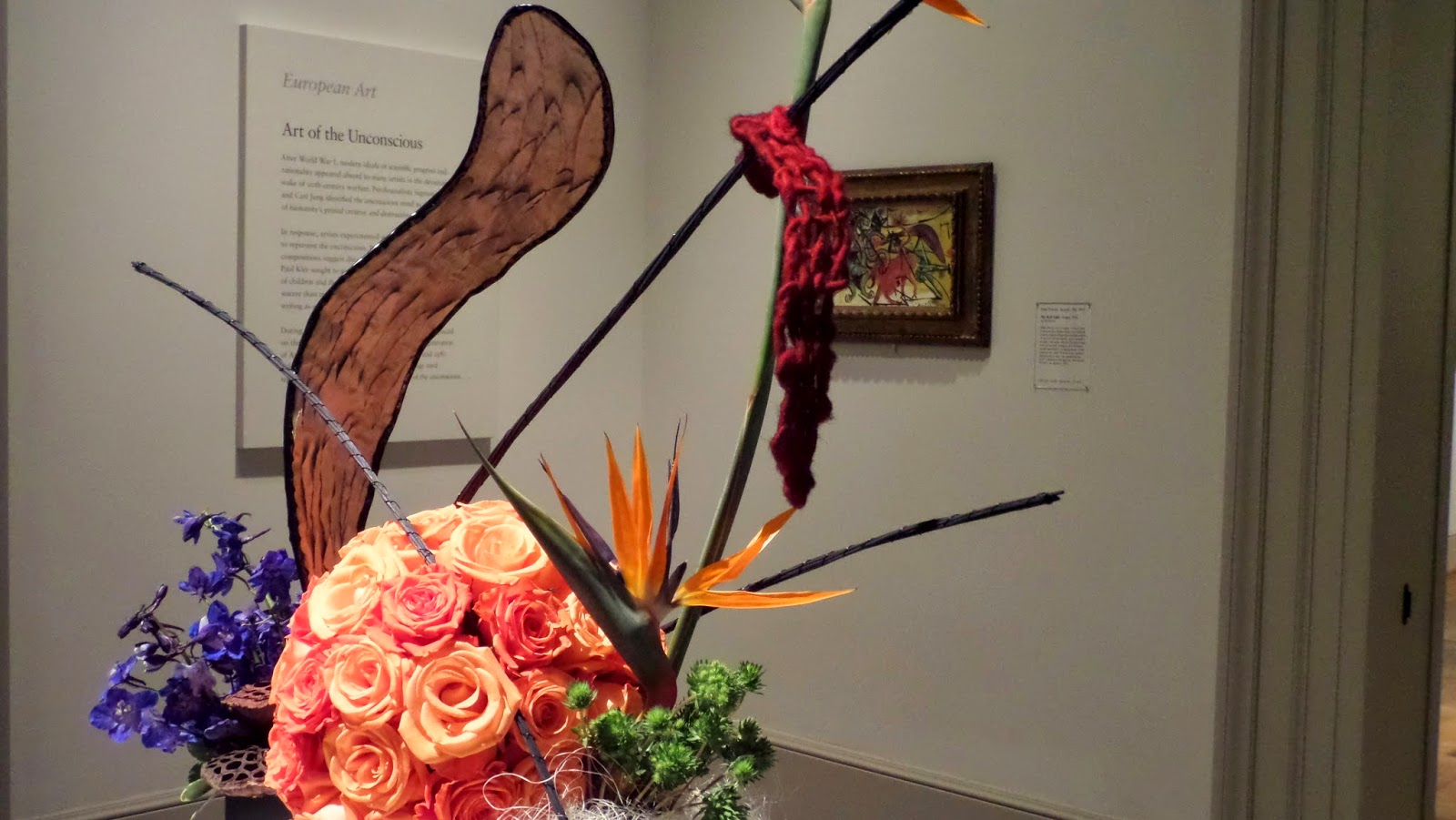 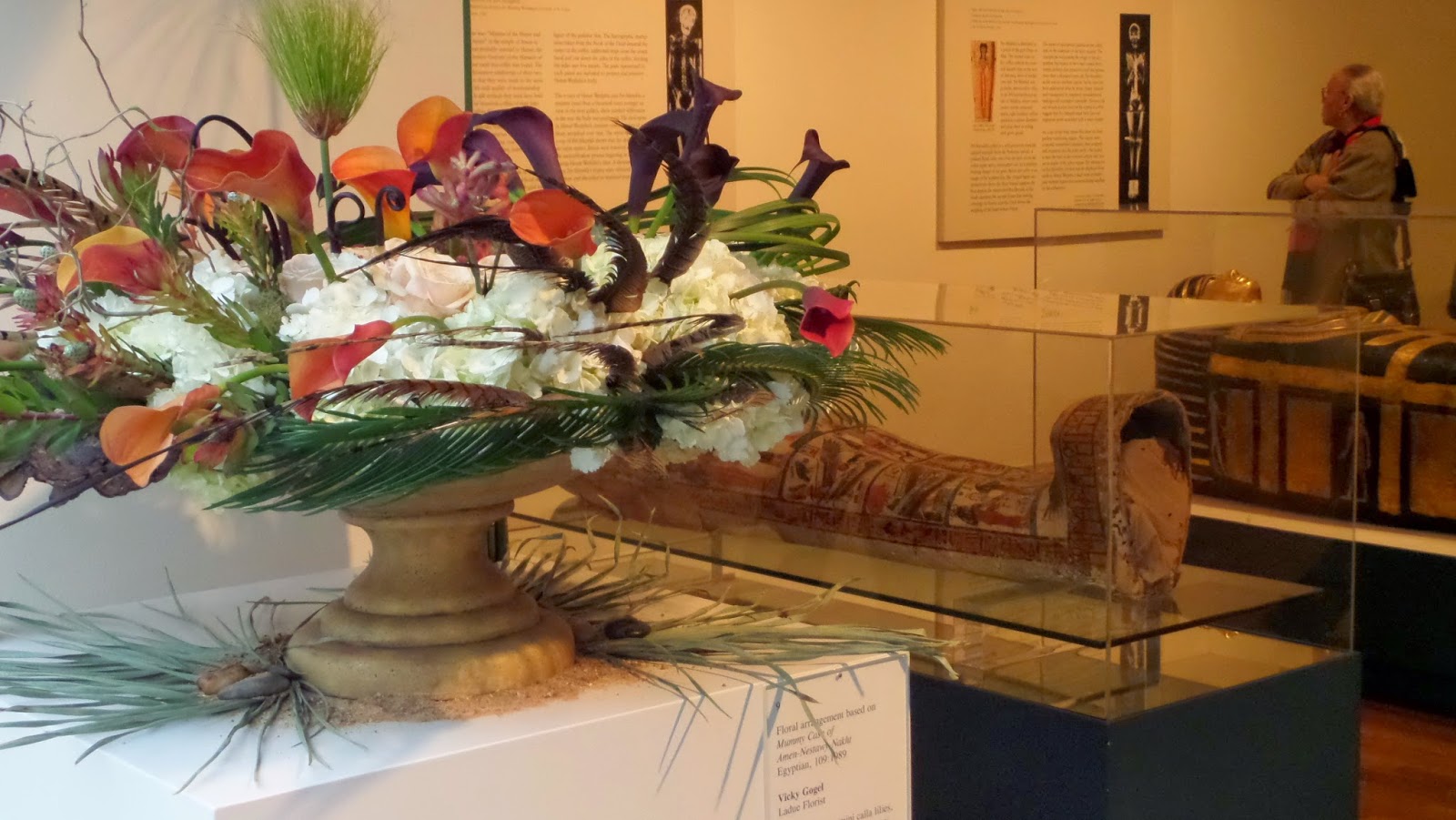 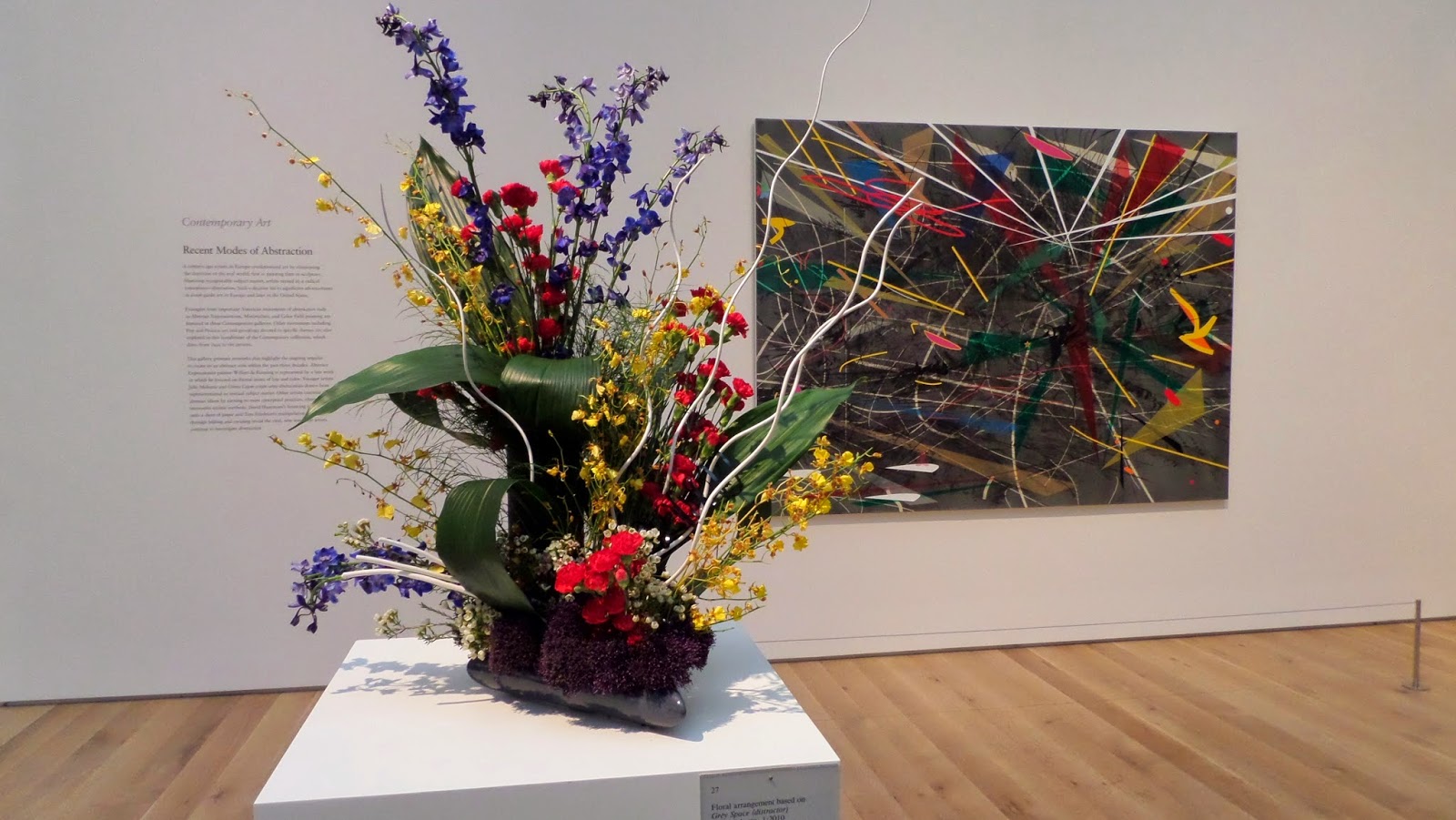 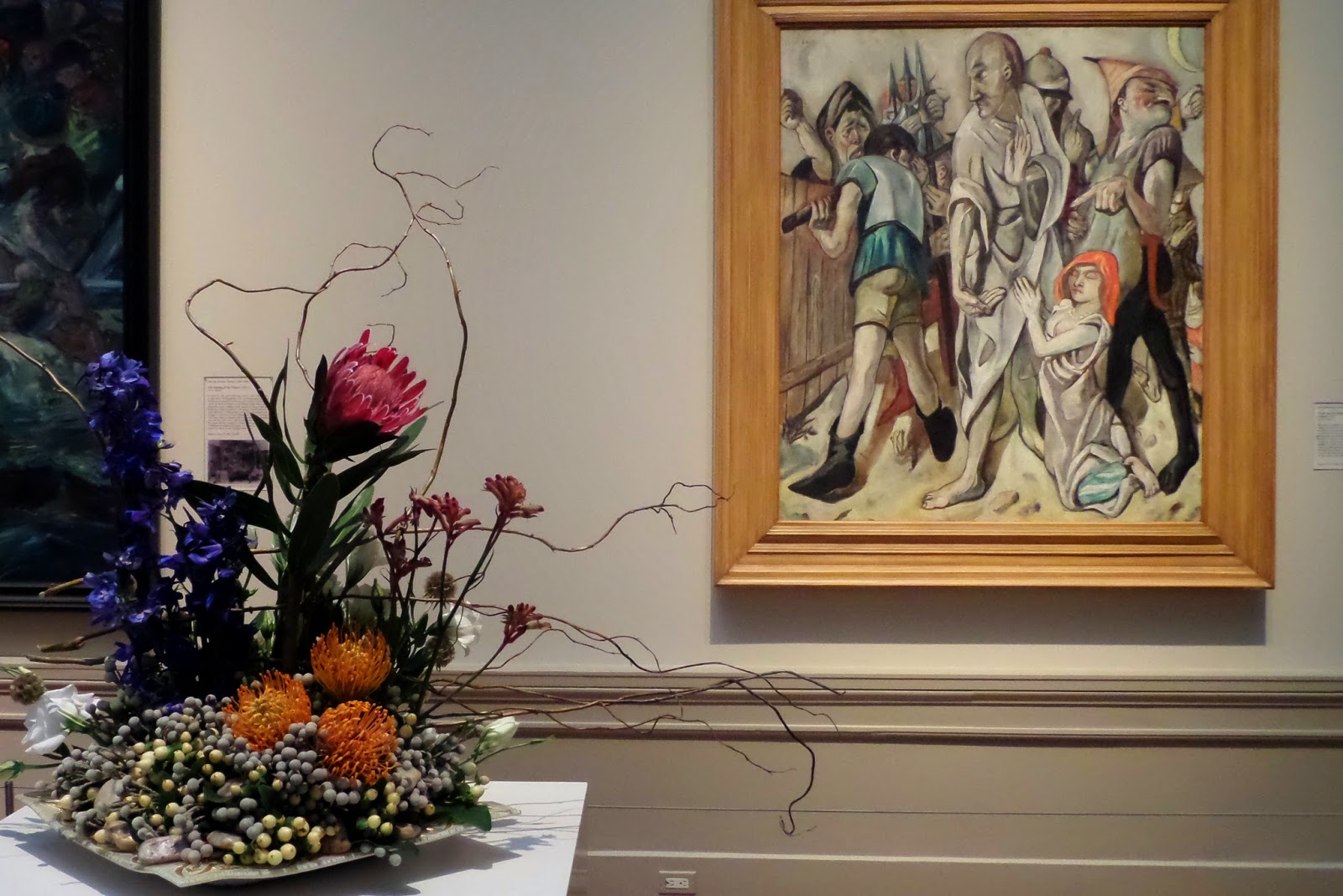 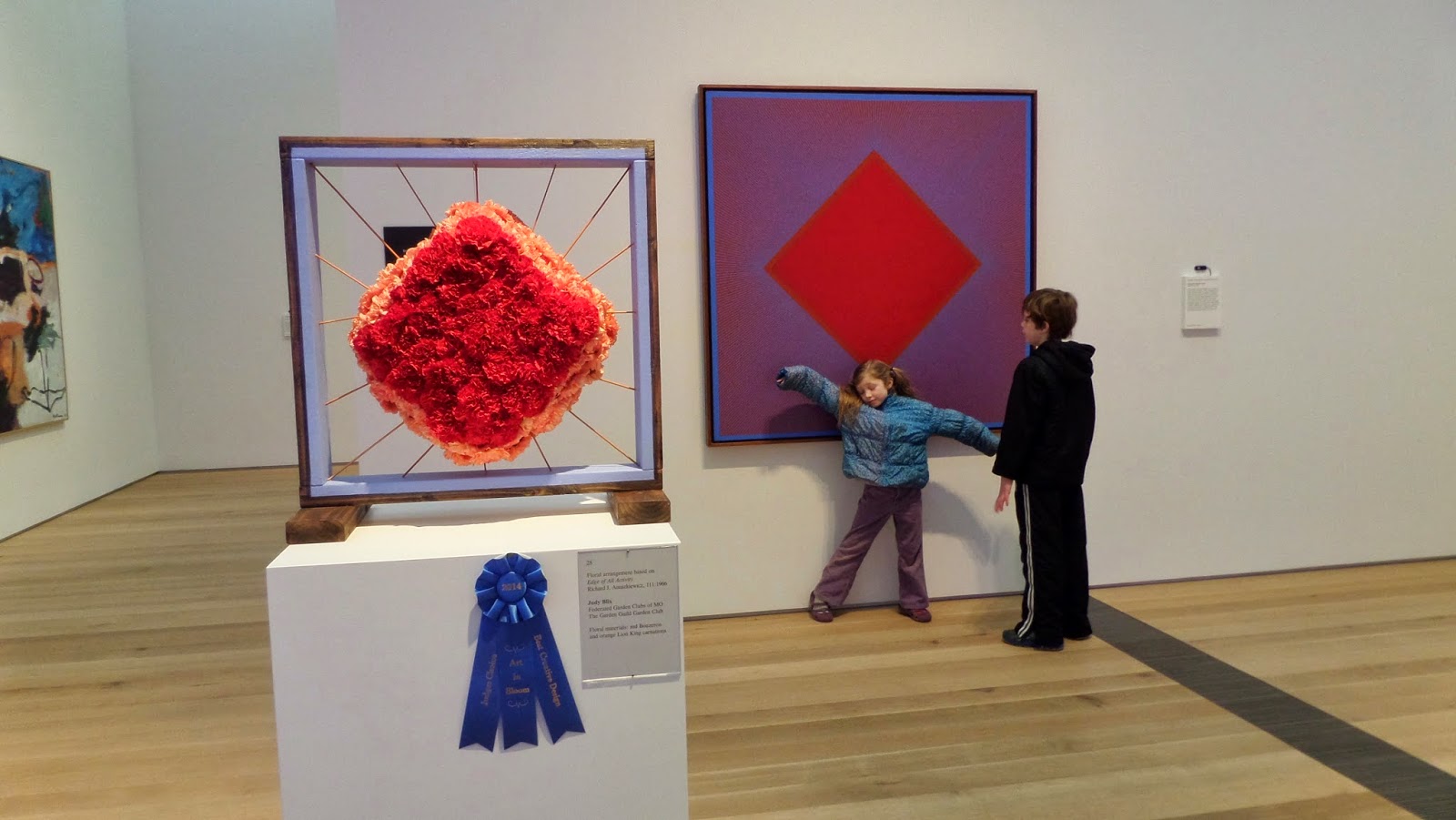 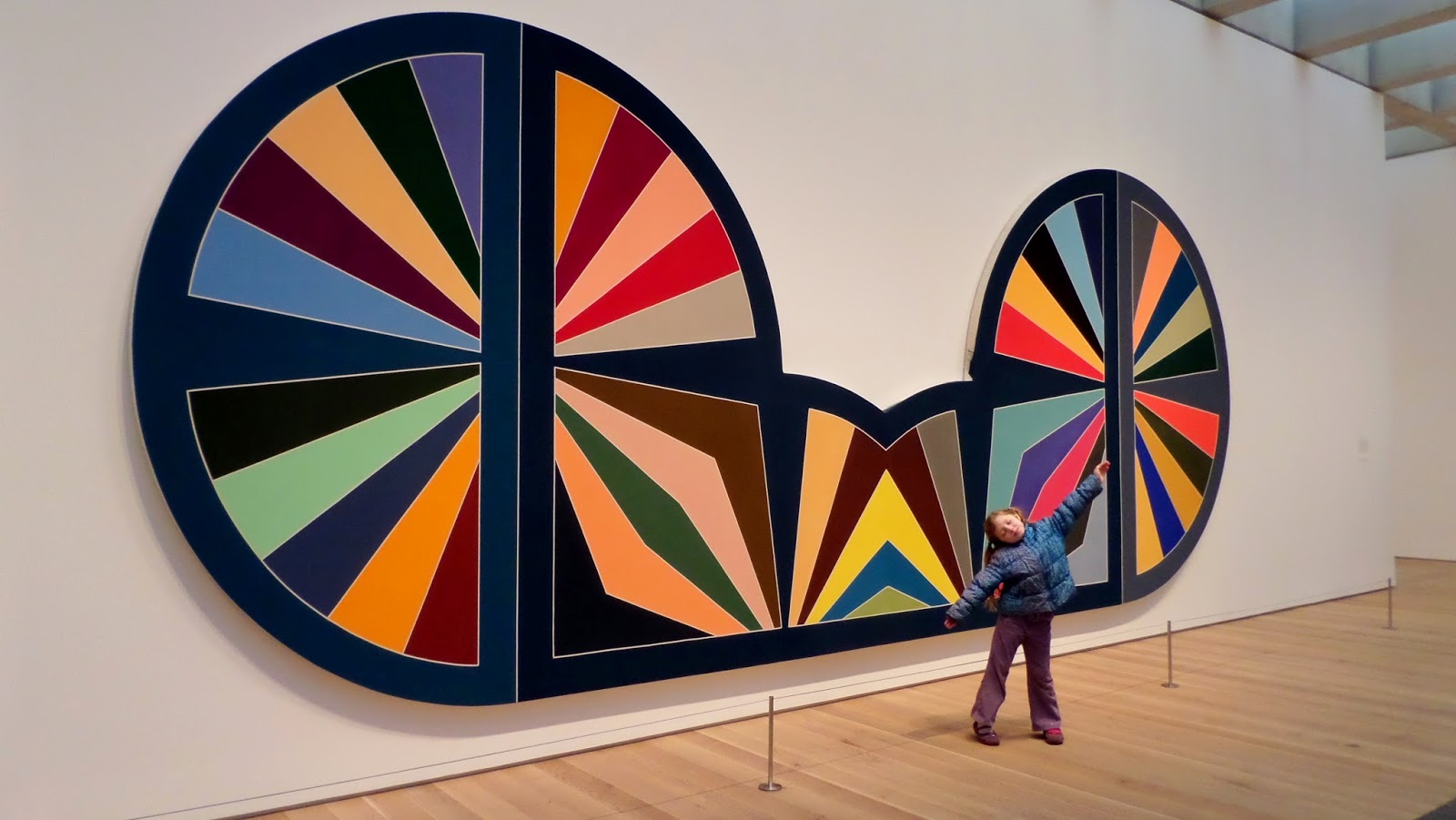