Last weekend our family participated in National Alpaca Farm Days. An opportunity to enjoy a leisurely drive to the country while soaking in the sunshine and fresh air. Northern Prairie Alpaca is located about an hour from St. Louis in Sullivan, MO. The moment we pulled up we were warmly greeted by owners, Les & Deb Wellinghoff. who kindly directed us to a nearby pen and let the kids hand feed the animals.

The Wellinghoff's have been raising alpacas for six years.  Though Les is quick to interject Deb is in charge of the farm - he just works for her. Deb's love for her herd is evident as she shared her passion and knowledge for these curious, docile creatures. She is committed to the health and well-being of her herd and loves to educate others about the unique qualities of alpacas.

While she has 20 alpacas, one thing worth noting is her farm does not smell -- at ALL.  That's because alpacas are considerate beasts.  They mainly eat just grass or hay (and not much of it) A 60 lb. bale of hay can feed a group of about 20 alpacas for a day.  In addition, herds establish communal dung piles which Deb and her husband clean up twice a day. They are also fairly quiet and generally make only a pleasant humming sound as a means of communication.  Occasionally you will hear a shrill alarm call if they are frightened.  Male alpacas make a guttural, throaty sound called orgling to attract females during breeding.

It was a relaxing and fun visit.  We look forward to their next event.  In addition to making and selling alpaca products, Deb hosts a variety of classes including weaving and animal listening by listening expert, Cindy Meyers. To learn more about alpacas or to register for a class, visit Northern Prairie's FB page.

*alpaca fiber is stronger, lighter, 30% warmer and four times less abrasive than merino wool of the same weight. It's also considered "hypo-allergenic" because unlike sheep wool, it contains no lanolin  which can cause skin irritations.

*there are two types of alpaca: Huacaya (which produce a dense, soft, crimpy sheep-like fiber), and the Suri (with silky pencil-like locks, resembling dreadlocks but without matted fibers). 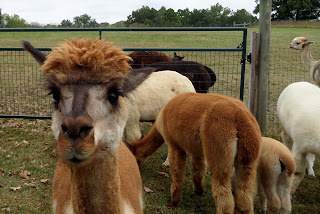