A couple weeks ago I took my two dramatic kiddos to enjoy a party to celebrate the St. Louis Reperatory Theatre's 50 Years of "acting up". While Natalie was looking forward to it, Noah was sure he would have a terrible time.

More than a dozen theatre groups were on hand to share their upcoming performance schedules and youth programs. I had no idea St. Louis Opera Theatre offered a summer program for kids. We received a backstage tour and watched a team of folks creating backdrops, costumes and props. Every 20 minutes or so a new round of actors would crop up -- putting on snippets of popular shows like Kiss Me Kate and Grease.

We also watched a rehearsal for the upcoming St. Louis Teen Talent Competition to be held at the Fabulous Fox in the Spring.

In the end both kids were entertained for nearly two hours. Noah even enjoyed making a dragon puppet with his sister. 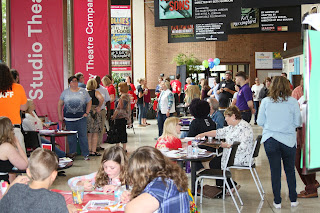 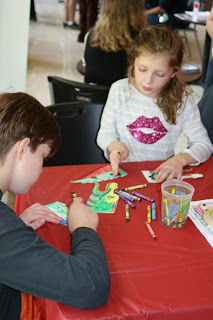