A Day in the Life of a Mom

As a mom sometimes days run into each other. A long, hard day velcros itself to an even longer, sleepless night. Back to back without a reprieve. The other night thunderstorms had Truvy restless and noisy. From 12:30 p.m. til 2:30 a.m. she rang her bells to go out, circled her bed, clicked her nails on our wood floors as she paced from room to room. I called her to bed. I commanded her to "go lay down".I even brought out the heavy...the pink, polka dotted jacket that she loathes to wear, but it often calms her as a thunder jacket might.
None of these things worked. In the end I found myself standing in the rain with weighted lids at nearly 3 am. At 5:30 a.m. Steve's alarm went off. I dozed for a few minutes before rising with him. I kissed him out the door at 6, then turned to Truvy who seemed bright eyed and bushy tailed and ready to face the day.
"Do you want to wake the kids?" But, before I got to the end of my question, she was already sitting outside Natalie's bedroom door. She was ready to get their day started. The morning was fraught with anticipation and a little anxiety on Nat's part. She was getting her braces off and was worried it would hurt or she'd gag while they took impressions to create her retainer.
Once we had successfully coaxed Truvy into the crate, we headed out the door at 7:15 a.m. to pick up our carpool, drop her off at school and then head to the orthodontist for an 8:30 a.m. appointment for both kids. An hour later we emerged from the office with one kid in braces and one without! Woo hoo! Back on the road I headed to Town & Country to drop Noah off at school then drove back to Webster Groves to drop Nat at her school. It was now almost 10 a.m. I returned home, released the beast and took advantage of the reprieve from rain. I walked the dog til 11 a.m then carried her to the car (as she is still less than enthusiastic about car rides) to take her to the vet for a flu shot. Once we returned home I tried unsuccessfully to load her back into the crate. At 12 noon I was back on the road again with my fluffy sidekick. This time we were headed back to Town & Country to pick Noah up from school at 12:30 as he had a half day. After dropping off our carpool Truvy dog began barfing in the backseat. It wasn't pretty-- the volume produced was actually quite epic especially since it was 1 p.m. and she hadn't eaten since 6 a.m. I pulled up to the house -- hosed out the car, hosed off the dog, hosed off myself then drove to McD's because I had promised to take Noah out to lunch. As I turned into the drive through I realized I could no longer ignore the searing headache -- a vice pressing on either side of my temples. I returned home -- apparently Mother of the Year to my son who loves cheeseburgers almost as much as he loves Star Wars. I took a shower and put myself to bed. It was now nearly 3 p.m. At 3:30 p.m. I was bolted from sleep as Truvy greeted Natalie with a hearty welcome and Nat made a beeline for my room.
"Mom, my permanent retainer fell out today at lunch."
Then Noah suddenly appeared and although it had been less than two hours since he ate lunch..."Mom, what's for dinner?"
This account is typical for me and likely commonplace for many moms.

I'm happy to report that today -- this Mother's Day I didn't have many to do's on my docket and bickering between the kids was mild. Noah made me a card and sang karaoke -- Elton John's "I'm Still Standing". How apropos. Natalie made me a card, a "chore voucher" and a worry pin (complete with a clothesline to hang it on). Steve played it safe and expressed his love with Kakao's chocolate caramels.  He's a smart man.
To all the strong women out there caring, cooking, cleaning and keeping their children from killing one another  -- Happy Mother's Day to you! 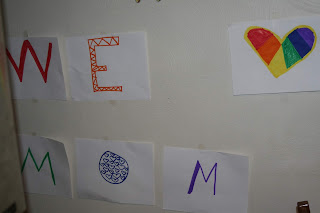 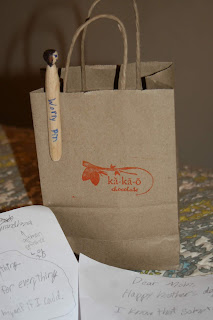 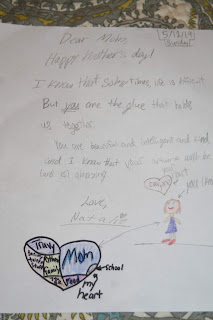 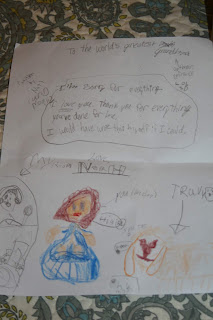