I am a planner's planner. I'm a terrible procrastinator. My Meyer's Briggs tells me I prefer things settled and decided. I like to make lists so I can check off the items as I do them. Sometimes I do things and then write them down on my list just so I have something else to check off. However, when it came to Noah's 16th birthday -- I must have hit the pause button on my brain because I had no idea where we could go that would be cool, fun and something out of the ordinary. (That is, after his allergy testing and ENT appointment...I know! It sounds terrible -- How could I schedule those things on his birthday, but the reality was the ENT had taken a second look at Noah's CT scan and he wanted to see him and ordered allergy testing. Schedules were tight on both ends. It was either do it on Noah's birthday or wait til end of summer to be seen. Thankfully, my friend Barb came to the rescue. She called to wish him a Happy Birthday and told me she had heard about a local company that made youtube videos and offered tours. She was sketchy on the details, but one thing she mentioned got my attention -- they have a prize wheel to spin at the end of the tour. Hmmm...

I had no idea what Vat 19 was, but I was getting us a tour. It was either going to be really awesome and score me points with my surly teen or really stupid. I took a chance and we snagged the last remaining spots for the afternoon tour. As Noah and I headed out to his appointments, I asked Natalie to start watching some of Vat 19's videos because we needed to know what we were getting ourselves into.

When we returned home, Nat was still glued to youtube.

She began filling us in on what she learned, but her tidal wave of giddiness had us hearing a mish-mash of topics that didn't make sense like a toe of Satan sucker, a spicy nut challenge, a burrito blanket and something about a man sitting in a tub of putty. She was talking so quickly and her voice went up two octaves as she spoke.

"I couldn't stop watching them," she said.

As the kids and I entered the doors of Vat 19, our mouths remained closed as our brains tried to take in the potpourri of  eye candy --  a stuffed toy fox head on one side, an enormous floor to ceiling rendering of Abraham Lincoln made out of pennies on another. A skeeball game and dozens of toys and products adorned the tables while the walls were covered in artwork from Vat 19 fans from all over the world. I was still in the dark about what Vat 19 was about when our tour guide and company owner, Jamie, led us through the offices of the many departments who have contributed to Vat 19's gold button Youtube subscriber status. In a decade their subscriber-ship has swelled to nearly 7 million. They are closing in on earning Youtube's coveted 10 million subscriber diamond button award. Jamie talked about their company's history and pointed out some of the props from past videos like Just Cereal Marshmallows -- a five foot tall cereal box they filled with two million cereal marshmallows. Later he showed us the enormous gummy pizza box which once contained a gummy pizza so large each slice weighed in at 28 lbs! We met the product buyers writers, editors and actors who create videos to entice, entertain and sell "curiously awesome" and sometimes dumb, but awesome gifts. Everyone we met was kind and a good sport about answering everyone's questions. We walked through their extensive prop room and took in their various sets and camera equipment. I noticed many of the tour-goers talking excitedly amongst themselves when they spotted props from their favorite videos and being star struck as they had their photos taken with the actors. I patted myself (Thanks Barb!) on the back for scoring a fun day with my kids and grinned as I watched them entranced and enthused by all they saw. I could see the wheels turning in Nat's head.

"I can't decide if I would rather be one of the writers, editors or the actors! I want to do it all!"shared Nat.

Next we had the opportunity to preview a video not yet released for a new toy they are about to launch. We ended the tour with a trip to their warehouse. Since Vat 19 is strictly an online store, it was kind of a special opportunity to shop the aisles live and in person.

I found anniversary gifts for Steve and a birthday gift for Barb. The kids each bought Vat 19 hats which they have been happily wearing every day.

Here are some of our favorite videos. If you are looking for something fun to do to connect with your kids -- especially your tweens and teens - I highly recommend a trip to their Maryland Heights headquarters. 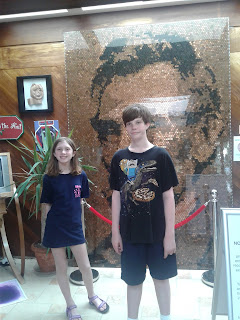 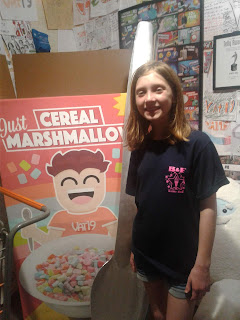 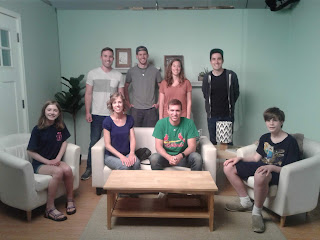 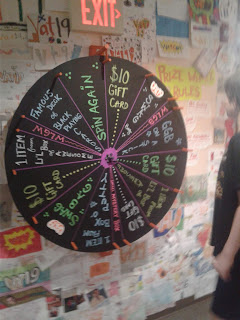