All I Want For Christmas

Last month when the store holiday catalogs started filling our mailbox, my kids began "shopping" for all the things they wanted to include on their Christmas lists.  For Natalie, this involved circling almost each and every item with a black Sharpie.  However, when it came time for them to write out their wishes, their lists were quite short.  All Natalie wanted was a pogo stick and...a calendar.  Noah had only one, or should I say has had only one toy on his mind for more than nine months...I know because he's found a way to sneak the 1,022 piece spaceship into conversation with me almost every day since Easter.  It's called a Lego Star Wars Republic Frigate (pronounced Friggot).  In response, I would nod and "uh huh" a lot, believing that he would eventually find something else to focus on because I had no intention of buying it.  It costs $140.  But, as Christmas drew closer, he held fast to his desire for the friggin Frigate, which is when I REALLY began to sweat.  I worried that if I didn't get him the one toy he asked for that it would crush him because Noah would take it to heart that somehow he wasn't good enough or deserving enough or Santa didn't like him enough to get him the only thing on his list. 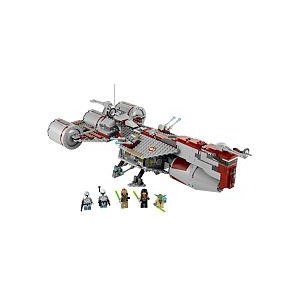 I struck out three times with eBay auctions.  Toys R Us offered a $25 discount if I purchased it with a Mastercard however;
A. I don't have such a card.
B. It was still too much money.
Thankfully, while I was combing Amazon in search for a pogo stick fit for Natalie's 43 lb frame, I learned that the "Earth's largest bookstore" also sold the Frigate for $43 dollars less than retail and was offering a $30 giftcard plus free shipping to new Amazon customers. I got it for $67. Yippee!  Though, once he opens it, he'll probably want me to immediately share in the joy of putting the monsterous galactic starship together with him.