For Spring Break, our family didn't leave St. Louis, however, we did enjoy lots of adventures together.  While none of our jaunts, cost anything. I did spend some time in tears...mostly out of joy but occasionally out of vacation-togetherness overload - a sure sign we played hard.

Natalie's vacation began a day earlier than Noah's.  This was perfect as it gave her the chance to join me at his school's annual talent show.  He and his friend, Jonathan were "The Jesters" and told knock knock jokes to a crowded gymnasium filled with family and friends.

"I can't believe Noah is doing this!  Miriam must give him confidence," shared Natalie.

Indeed.
Saturday morning we took part in a free program offered year-round, throughout all St. Louis County Libraries called STArt@ yourlibrary.com (Science, Technology and Art programs).  We met at Grand Glaize Library to learn the fundamentals of building bridges and explore and build some of our own using various materials and techniques. 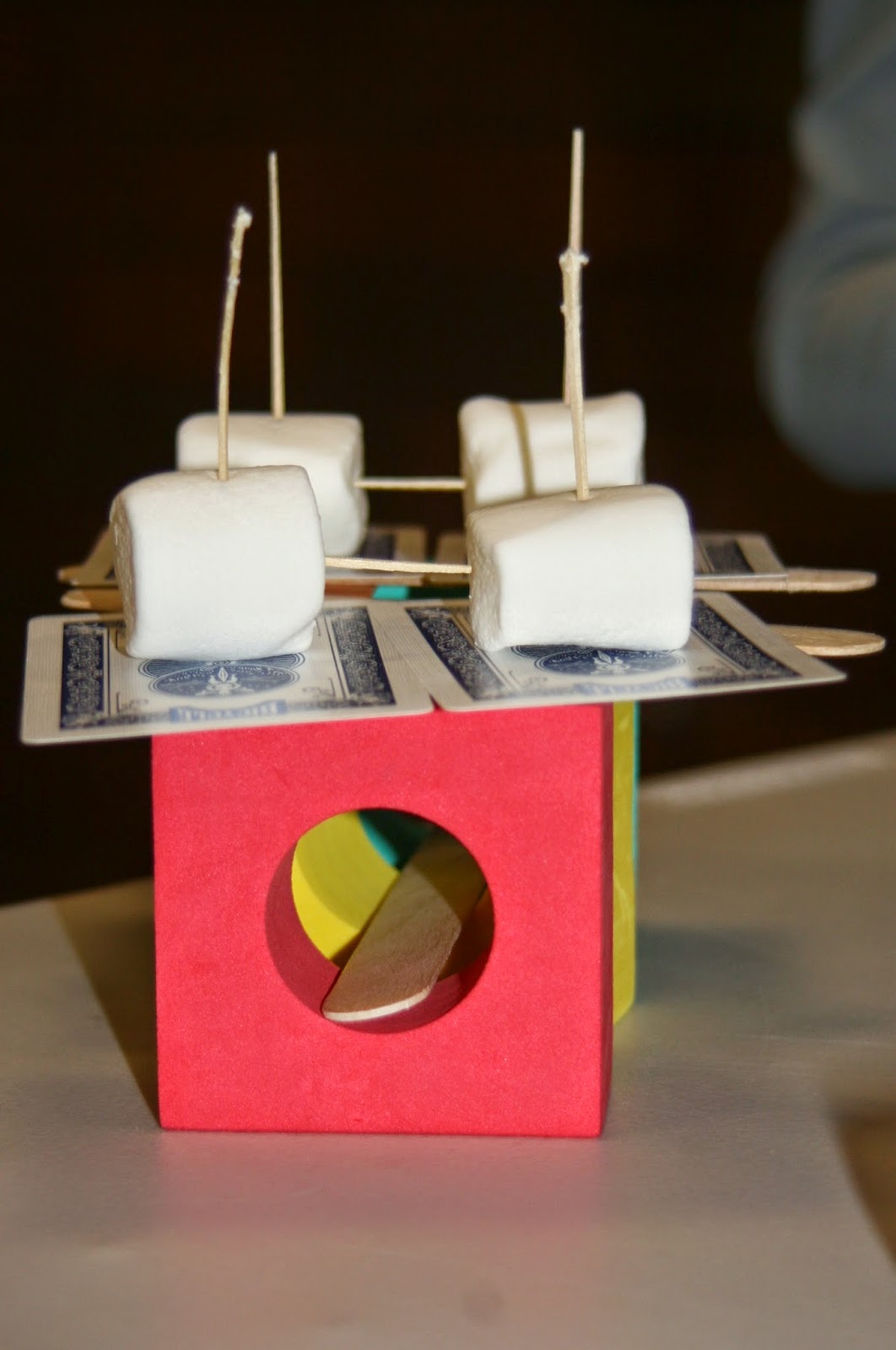 In the afternoon we headed to Montgomery Bank for their latest kids club event featuring egg hunts, crafts and games.  If you are looking for a "small-town" bank with friendly tellers and a place where your kids can earn 5% on their money (up to $500) -- look no further than Montgomery. 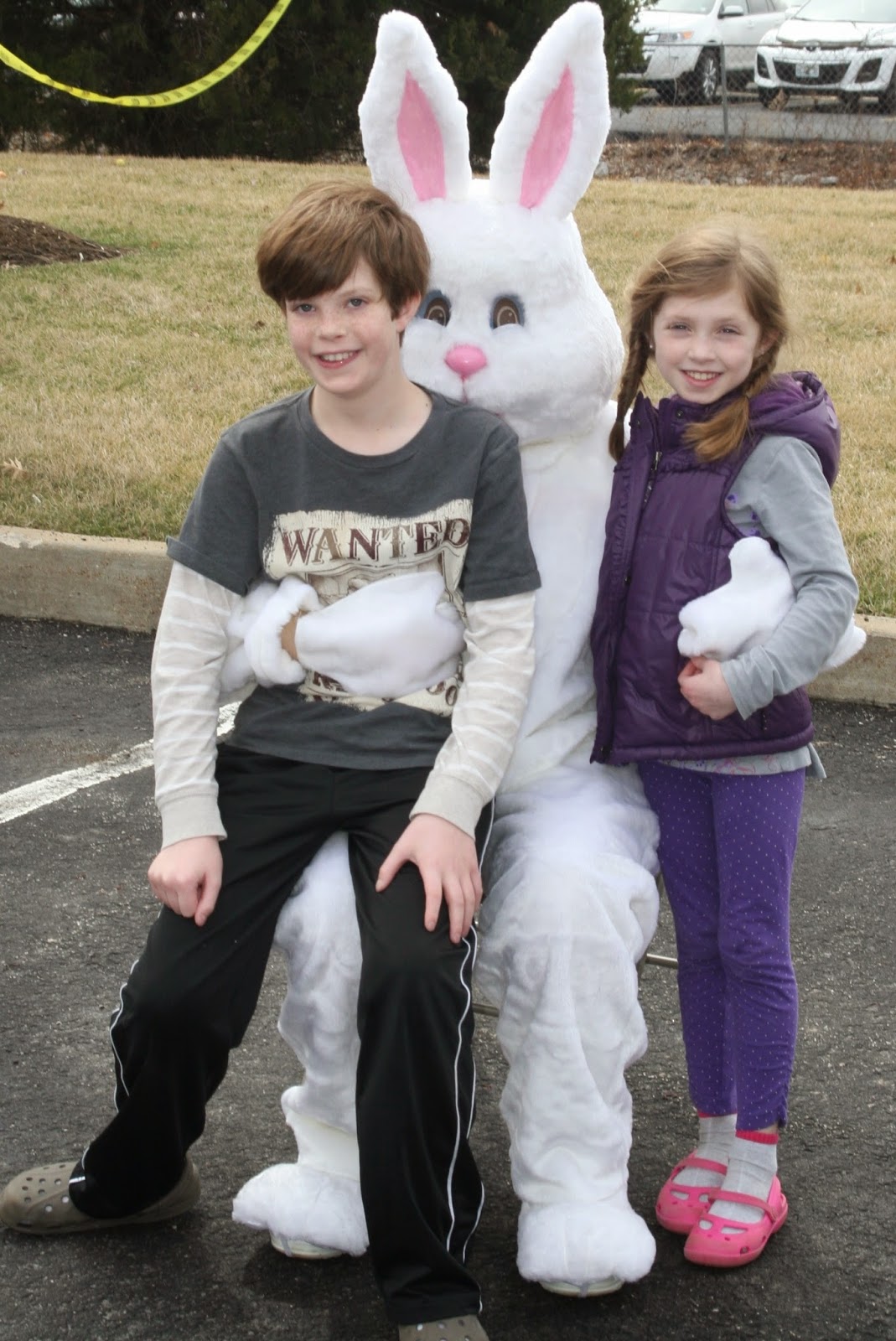 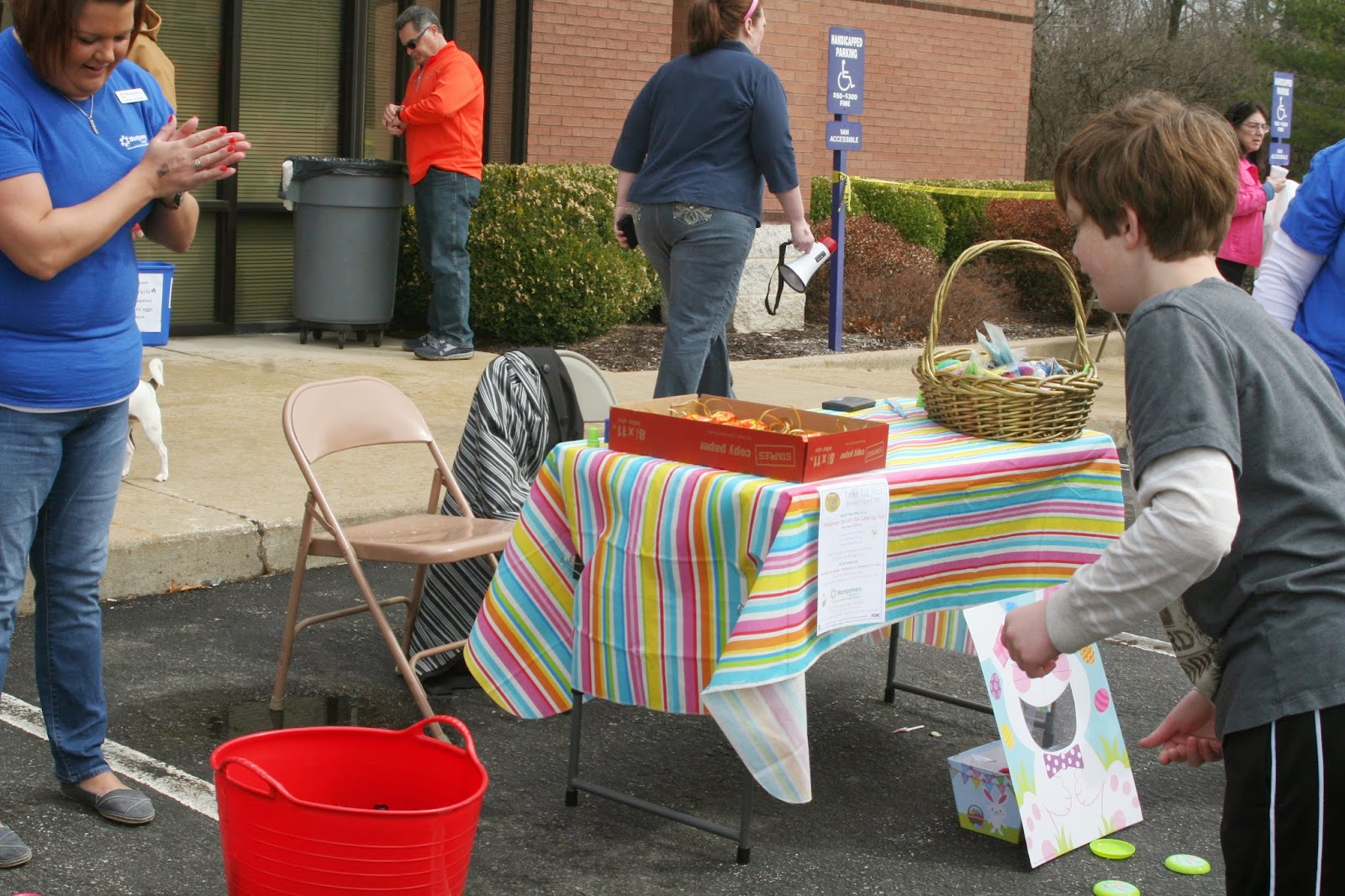 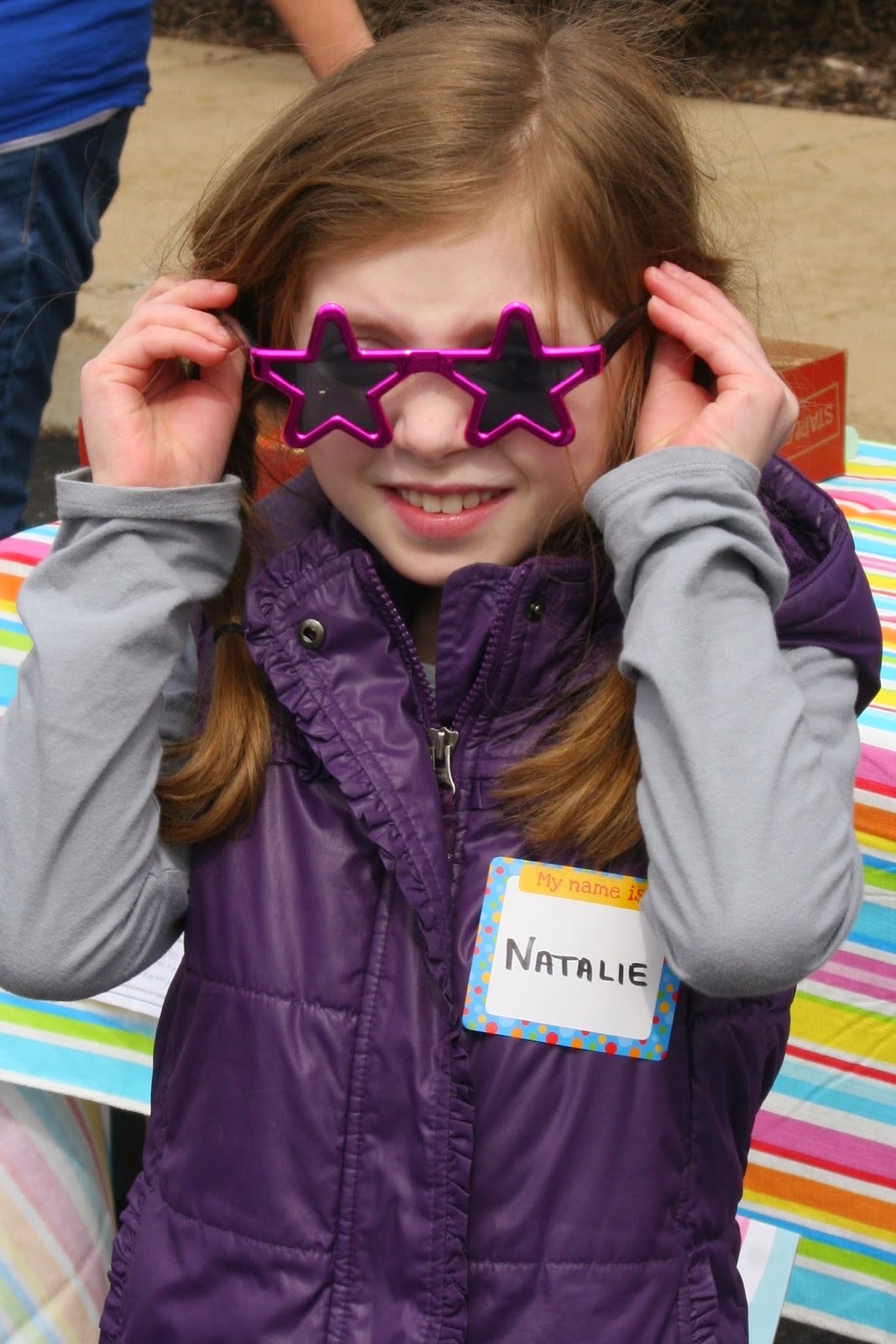 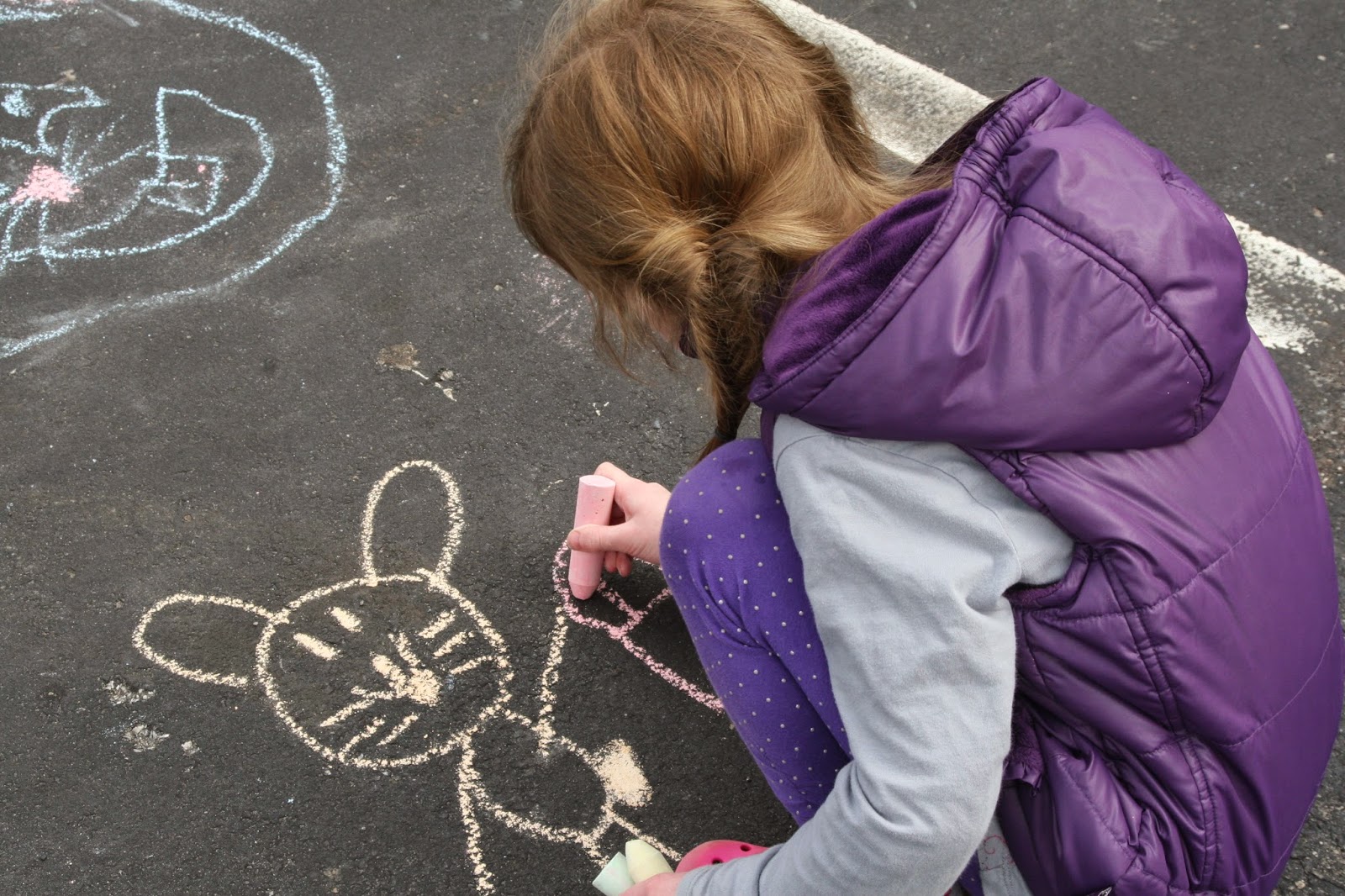 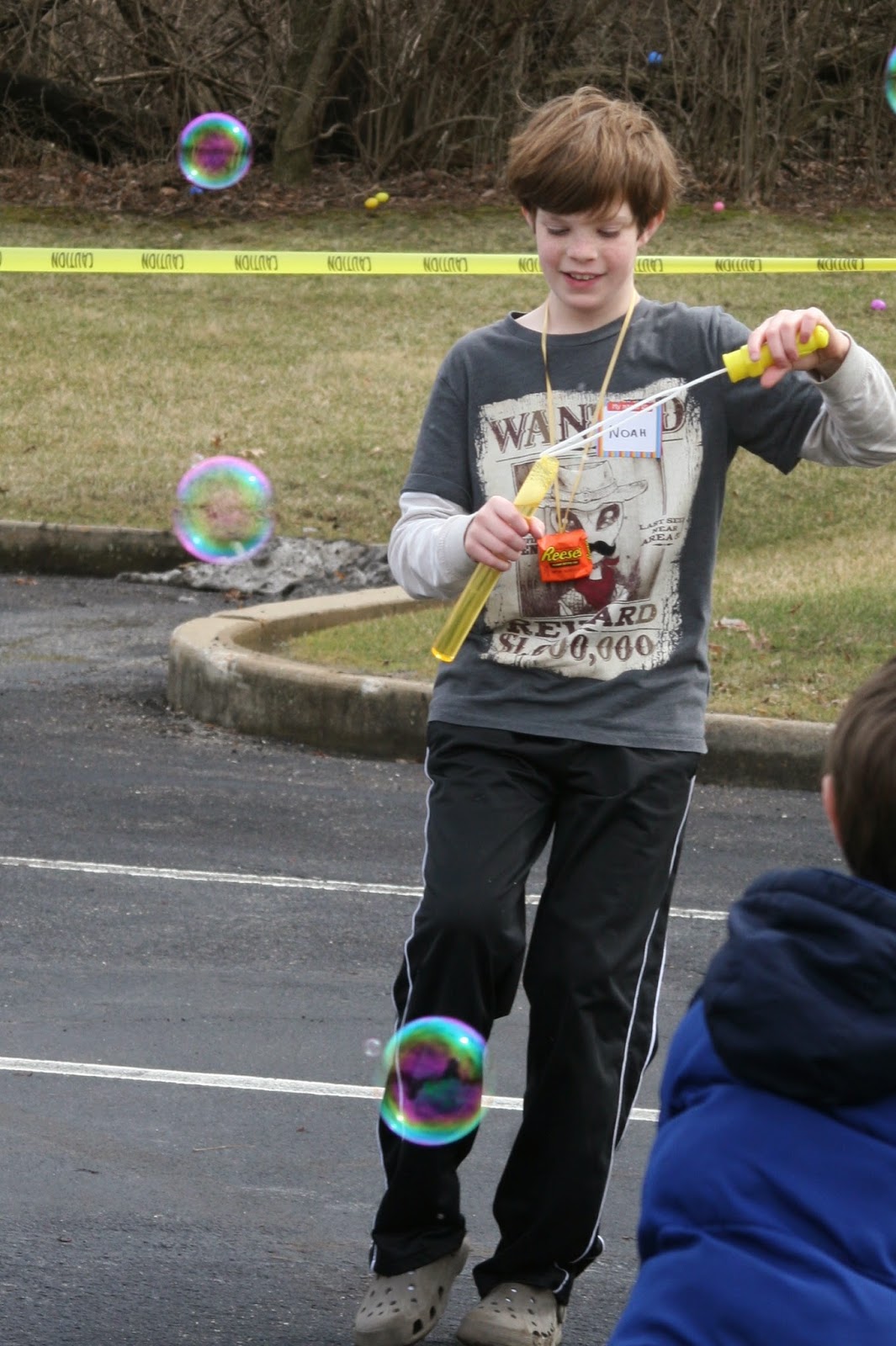 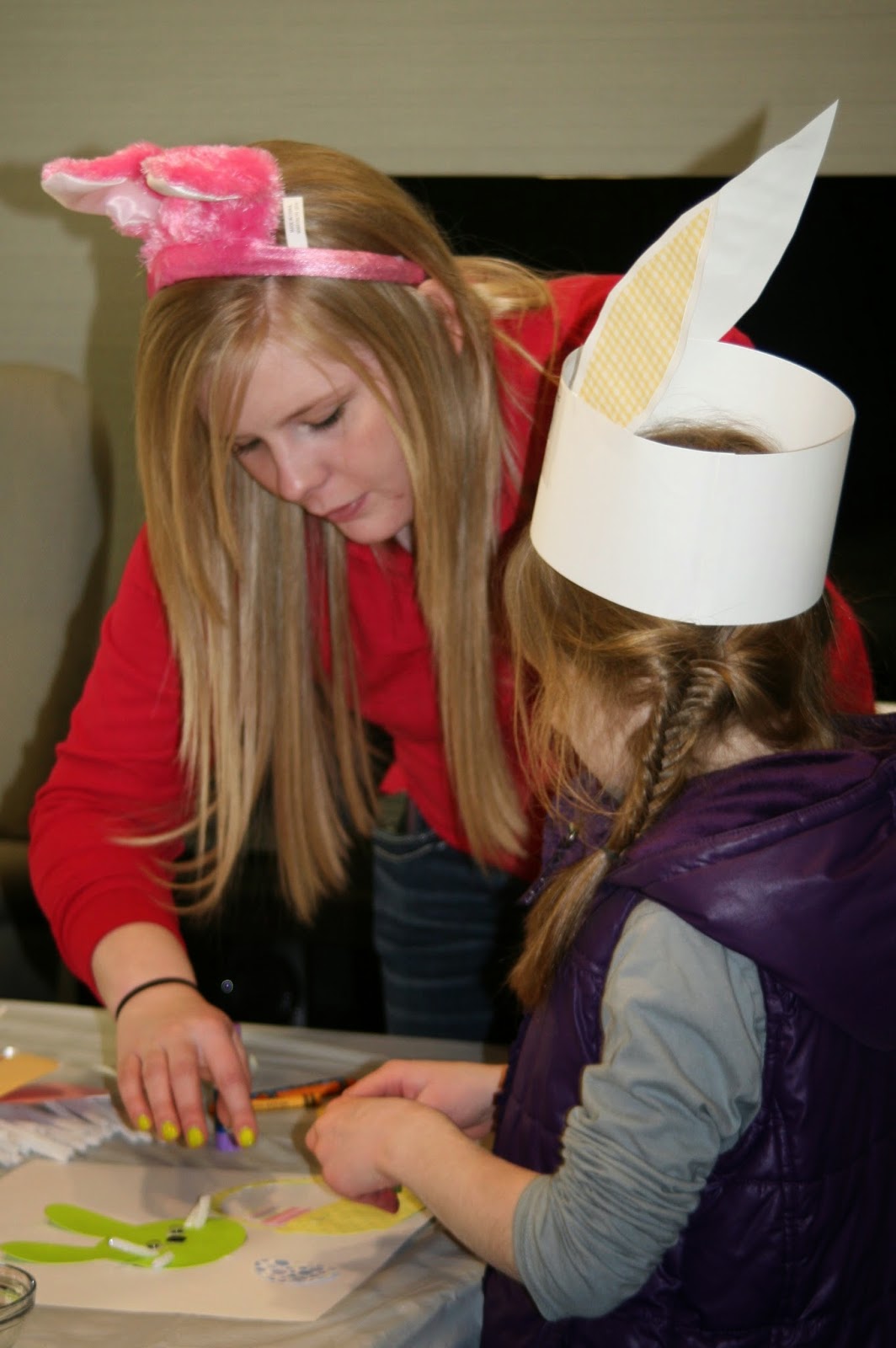 On Monday we conducted some hair-raising experiments with the help of a Mad Science instructor  at Tesson Ferry Library...another fun, free class offered through the STArt @yourlibrary program. 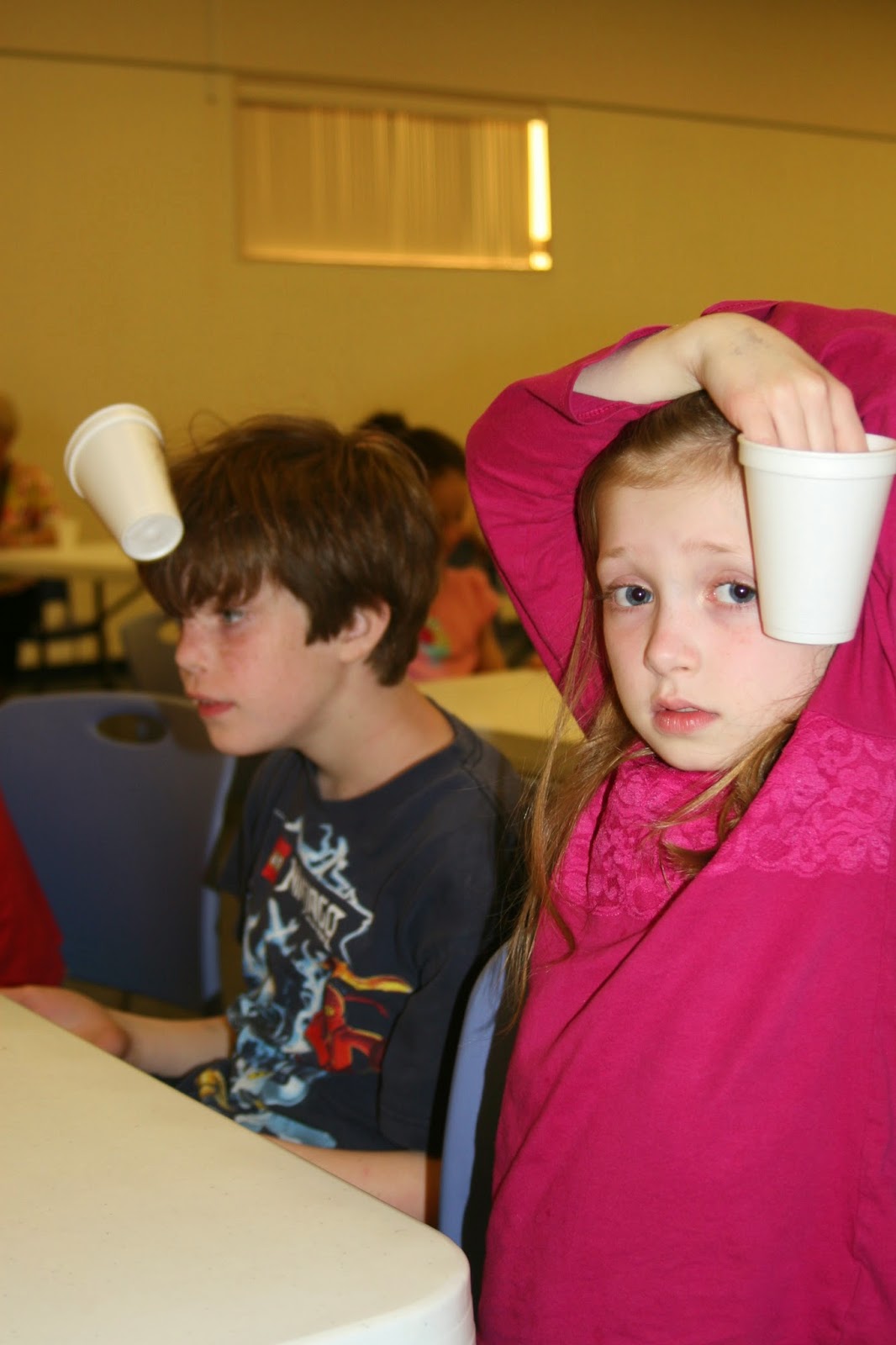 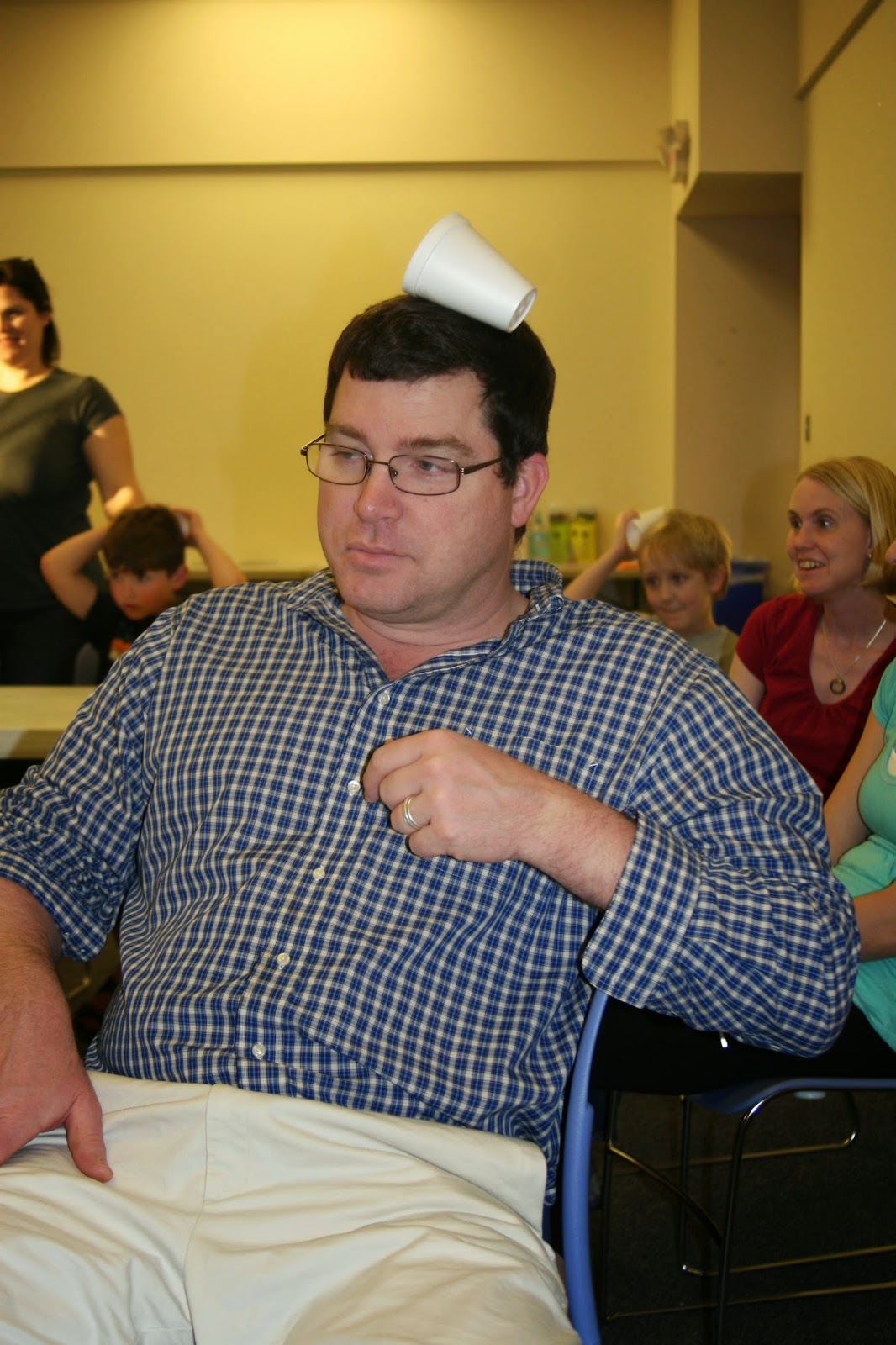 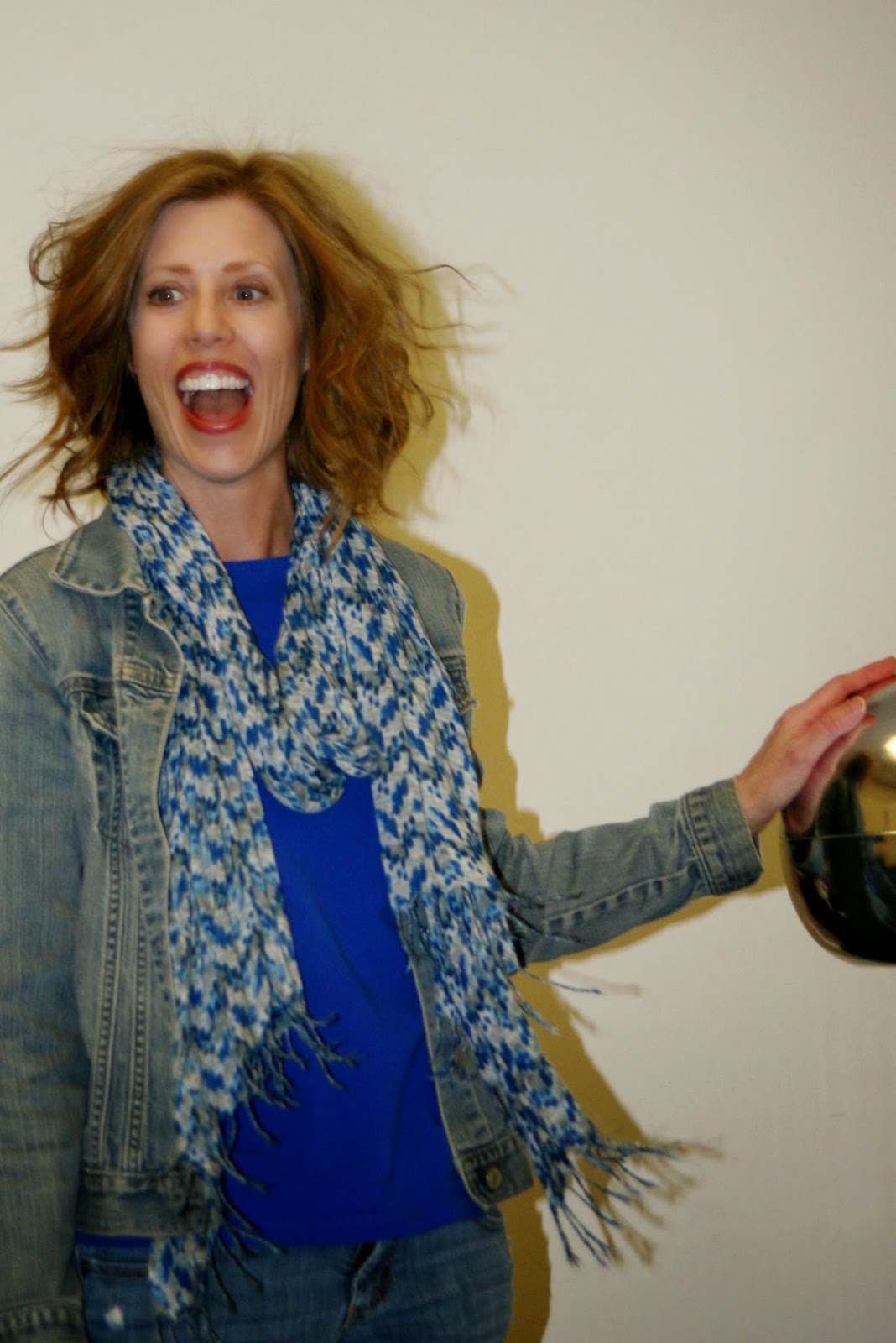 Temps were crisp on St. Pat's Day, but we still had fun hanging out at the zoo. 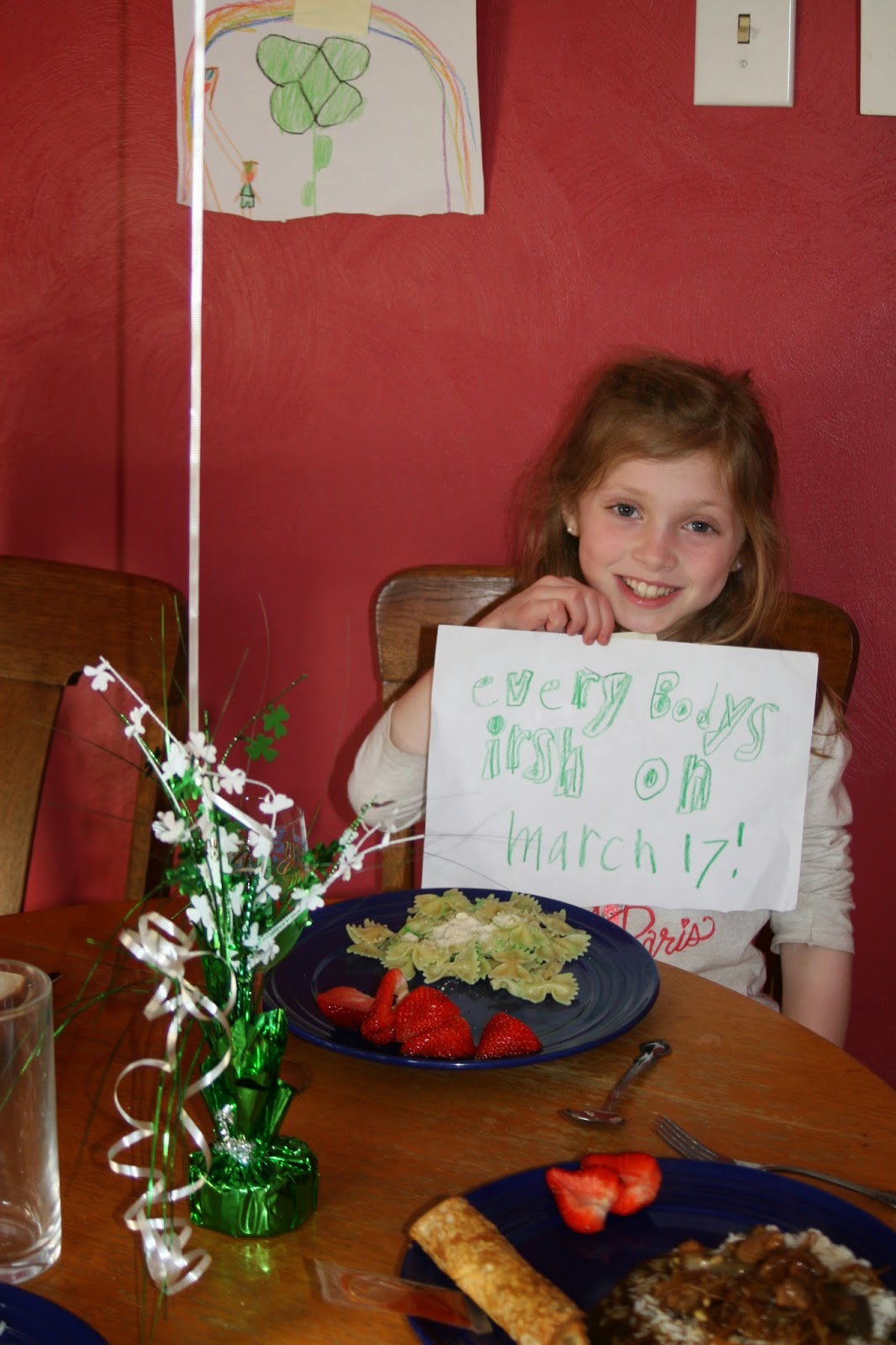 While we are mostly of German-descent, Natalie assured me everyone is Irish on St. Pat's Day.  She wanted a party.  I obliged by providing green pasta noodles while she made the decorations.  The store was out of Corned Beef and Cabbage (no matter because no one in my family besides me will eat it). Instead, I made Pork Chop Suey.  Very good and easy to make.  For dessert, I dusted off my Bella Mini Fluted Cake Maker purchased on a Swap & Sell for $2.  I was skeptical it would even work, but the results had my two kids singing it's praises.  The cakes only take 3-4 minutes to cook.  I topped them with chocolate ganache and gold sugar.  A perfect solution for when you want cake, but don't want to heat up your kitchen.

That evening we headed over to Kirkwood Library for Family Bingo Night.  We visit lots of libraries, but this one is one of our favorites. The programming is outstanding and the staff are wonderful.  I also love their kids blog. We made out like bandits that night.  Everyone came home with at least one prize...and not junky stuff -- nice things like books, games and stuffed animals.

On Wednesday we lay like broccoli and watched Big Hero 6.  In the afternoon Steve and I got out my great-grandmother's recipe for vinegar pie crust and made ourselves a big, fat apple pie.  I've since been eating it for at breakfast and dinner.

On Thursday we joined some friends for a trip to Chocolate, Chocolate, Chocolate Co. for a free, factory tour.  It was fun as the kids and I have been reading all things chocolate as part of our "Read & Ramble" project. Later we headed to Powder Valley Conservation Center to say hello to Peanut and friends. 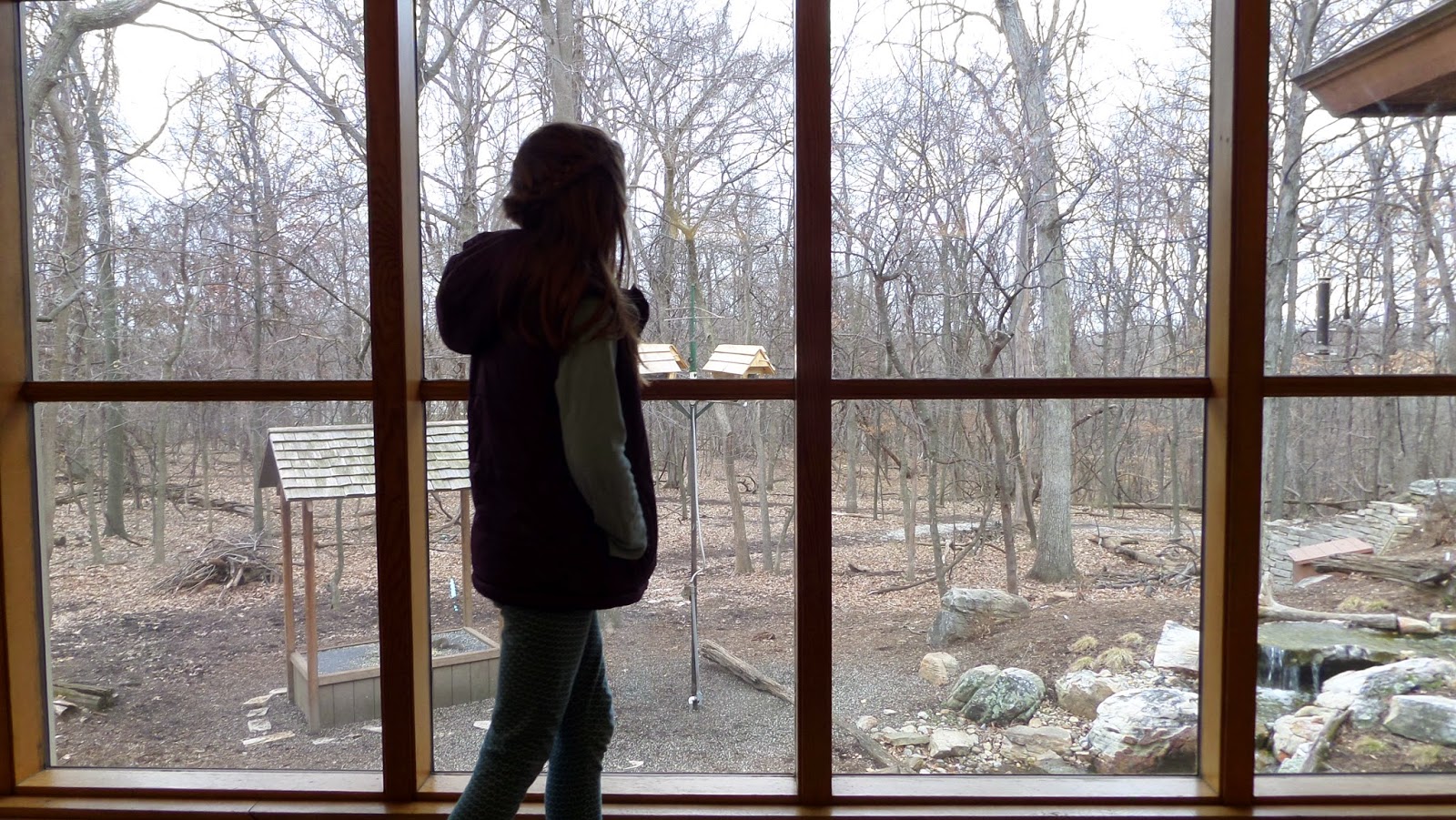 Friday morning we headed back to Kirkwood Library for their "Inventor" class.  The kids got into teams and were each given a large, garbage bag full of stuff to create something new.  Noah and his buddy worked together to create an airship complete with working catapult. 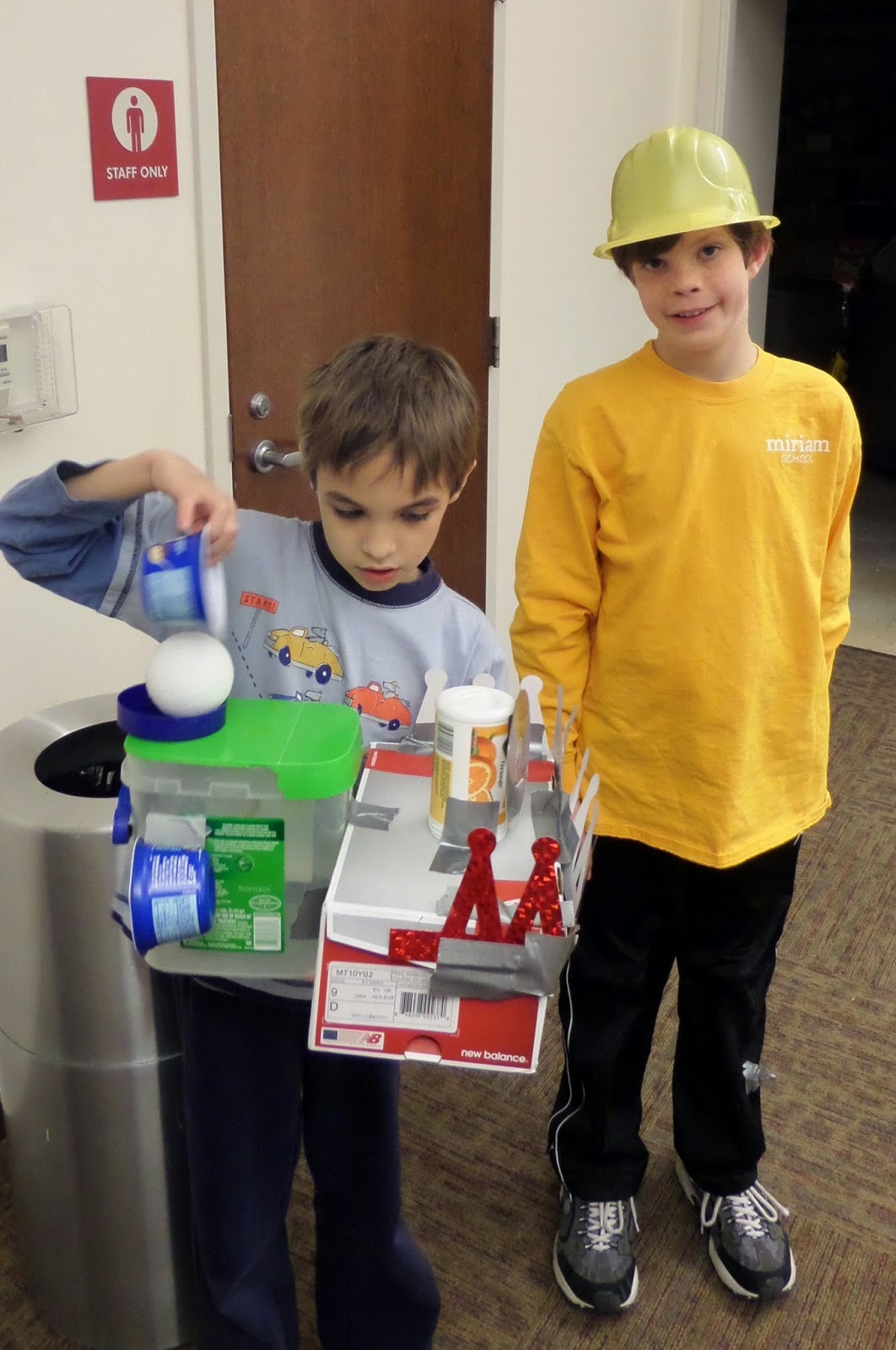 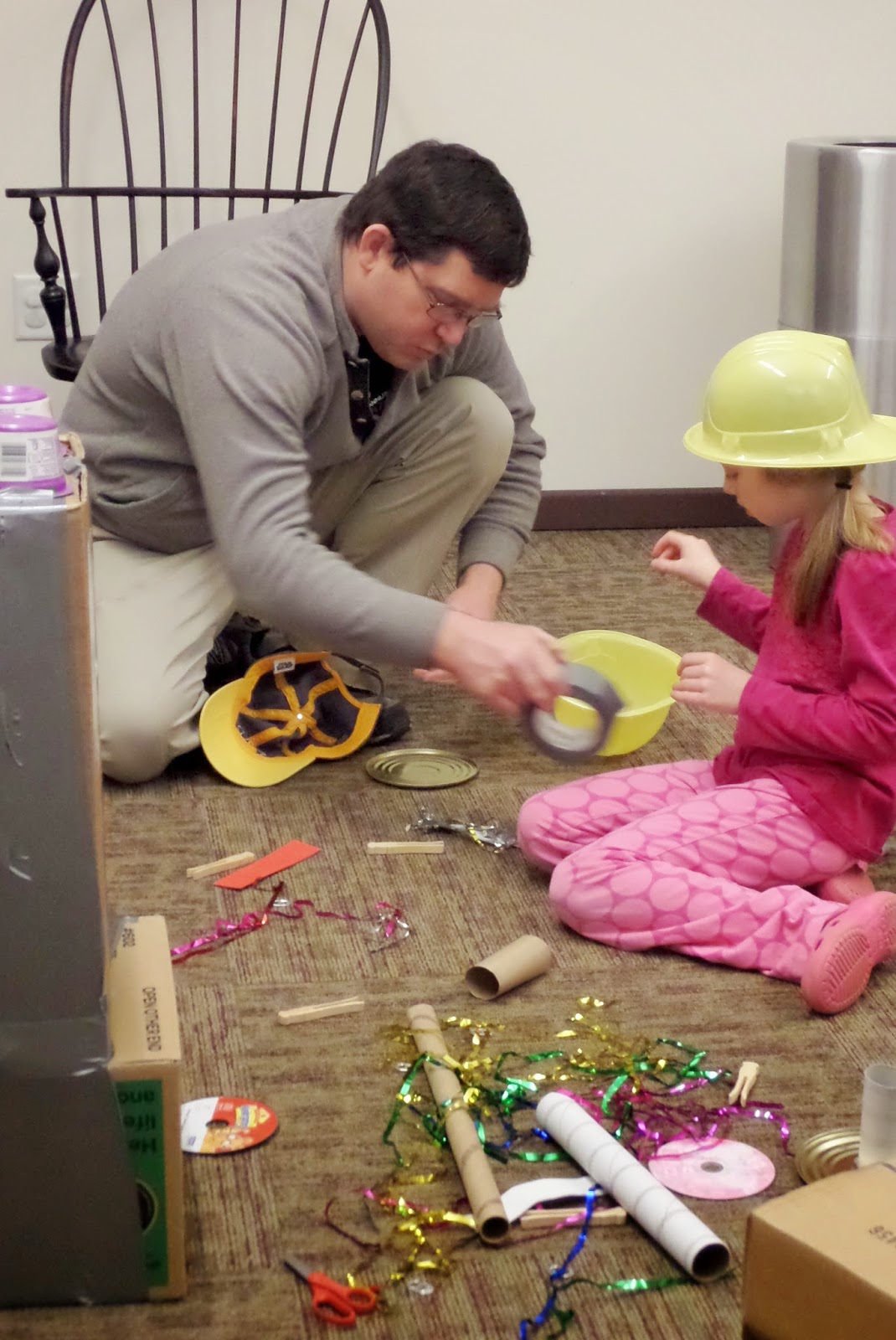 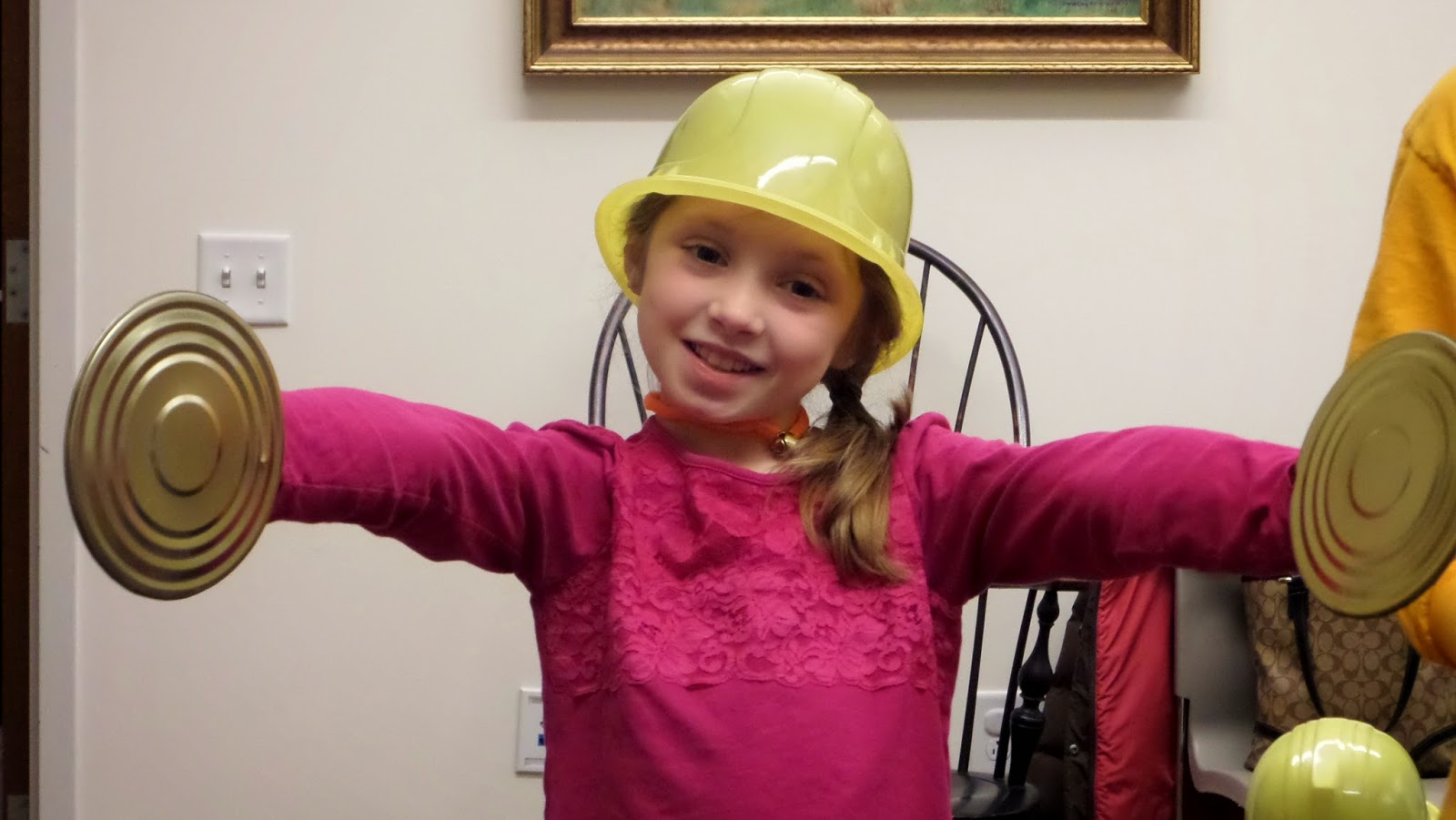 On Saturday we took advantage of the sunny rays and free admission into the Missouri Botanical Gardens.  While the Children's Garden doesn't open for another week - we had plenty of things to see and do in the Climatron including make and take nature crafts and feeding the fish near the Japanese gardens. 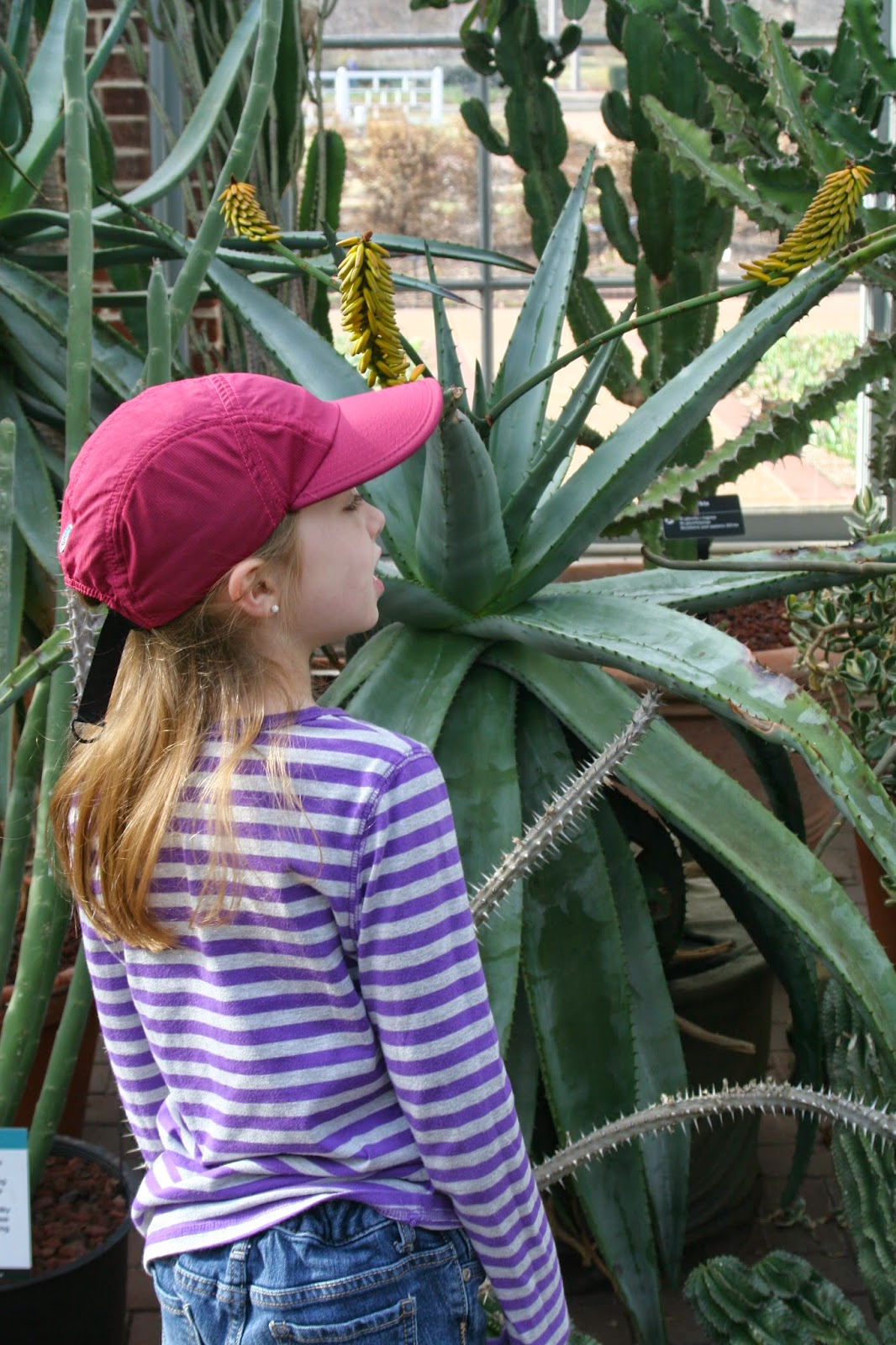 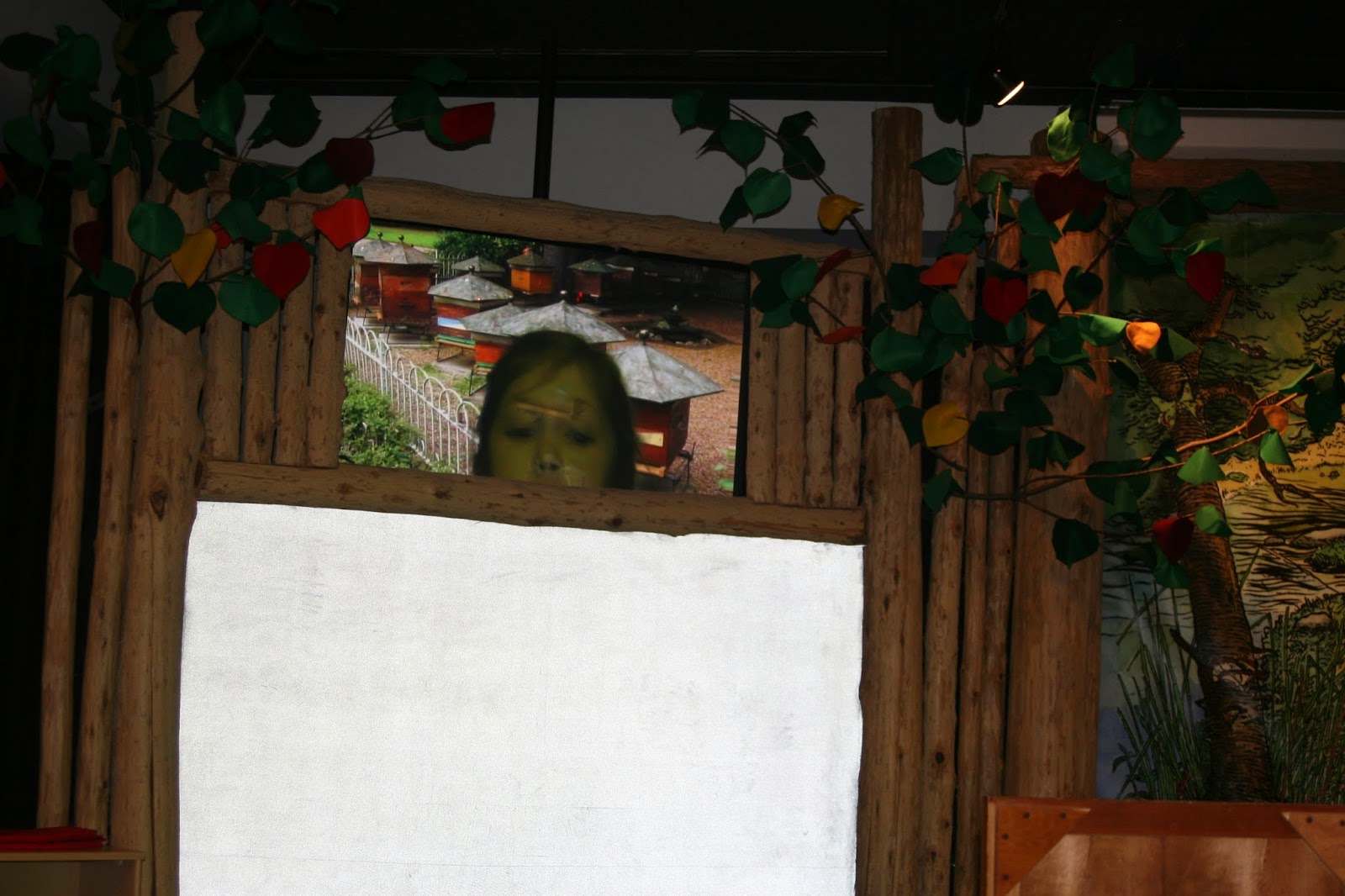 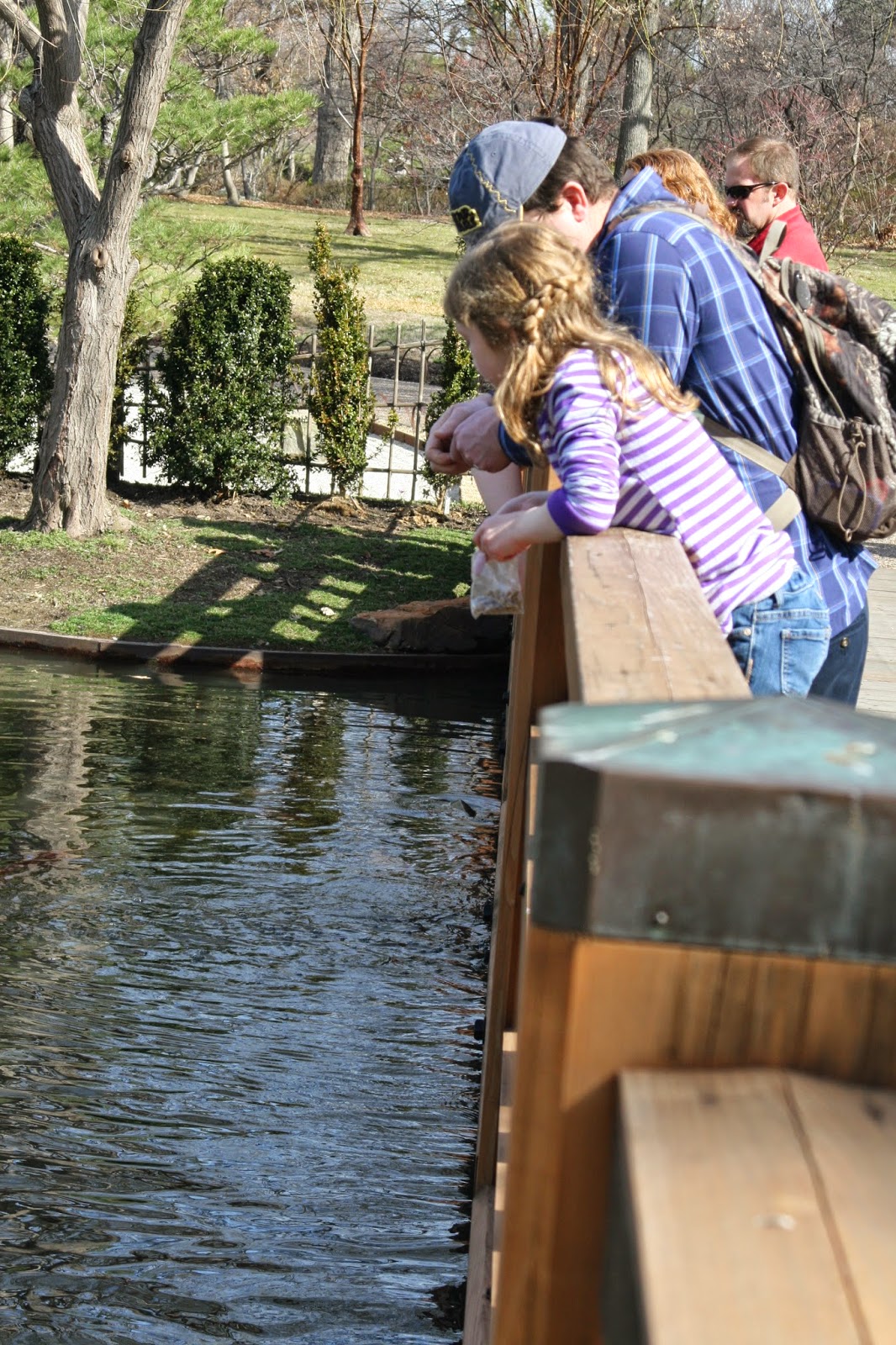 For our last day we participated in Family Sundays at the St. Louis Art Museum (SLAM).  Each Sunday afternoon, SLAM host crafts and a docent led tour.  During the month of March, the theme is Mummies.  While I had to practically drag Noah to the car to go -- once we had arrived, he was quick to involve himself in the craft. The kids made Egyptian-inspired hieroglyphic charm necklaces.  During the tour, my little "I hate all things art" became the most active participant in our group.  While there we also took in Nicholas Nixon's: 40 Years of the Brown Sisters.  To say, I found the series moving would be an understatement.  By the time I reached the last photo, I was holding back tears.  It's hard to explain, but to see the collection in it's entirety is breath-taking.  In each black and white photo, the sisters face the camera head-on.  Their stoic expressions and casual stances draw you in.  If you wish to see this exhibit -- better hurry! It leaves April 4th. 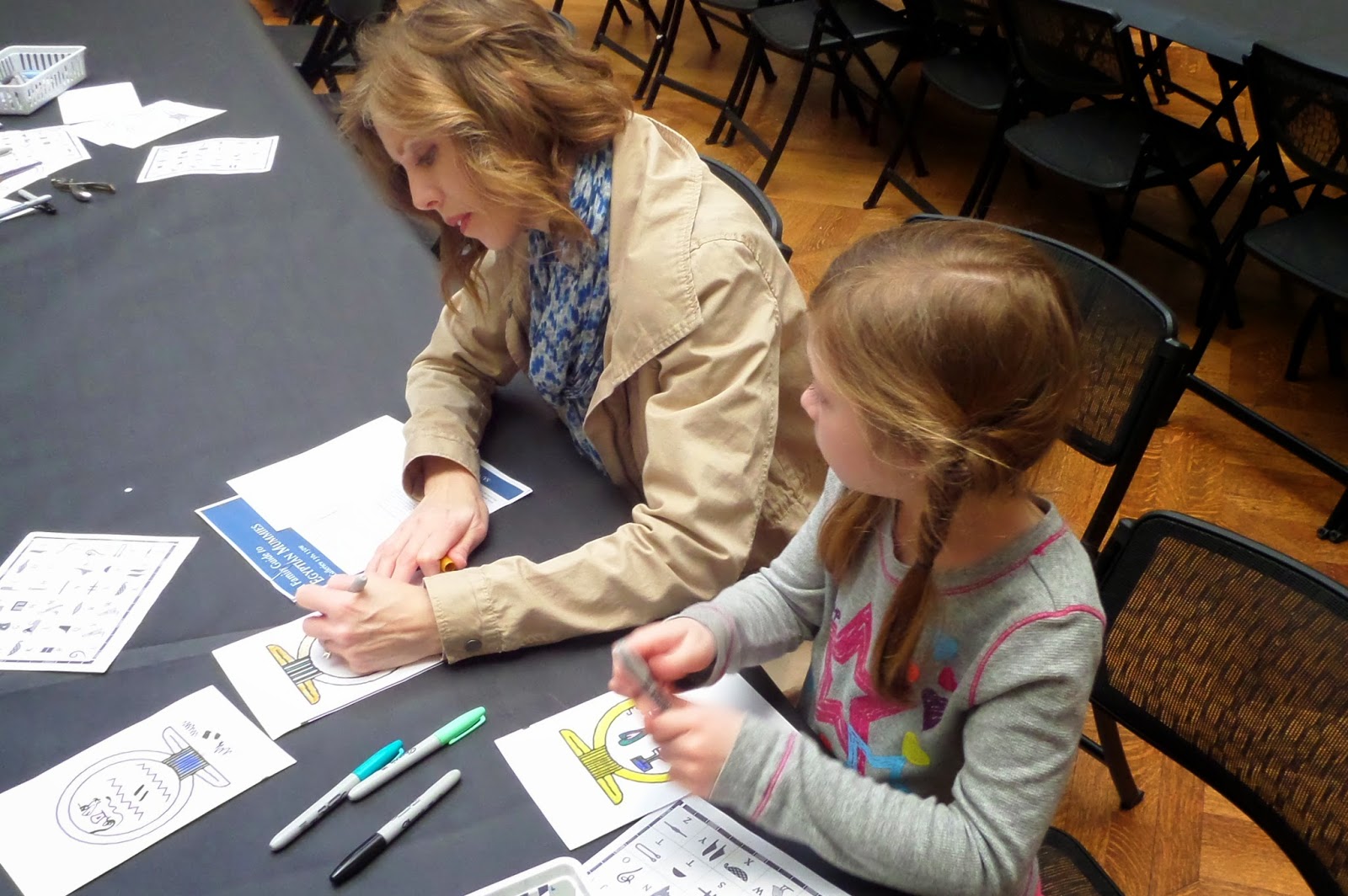 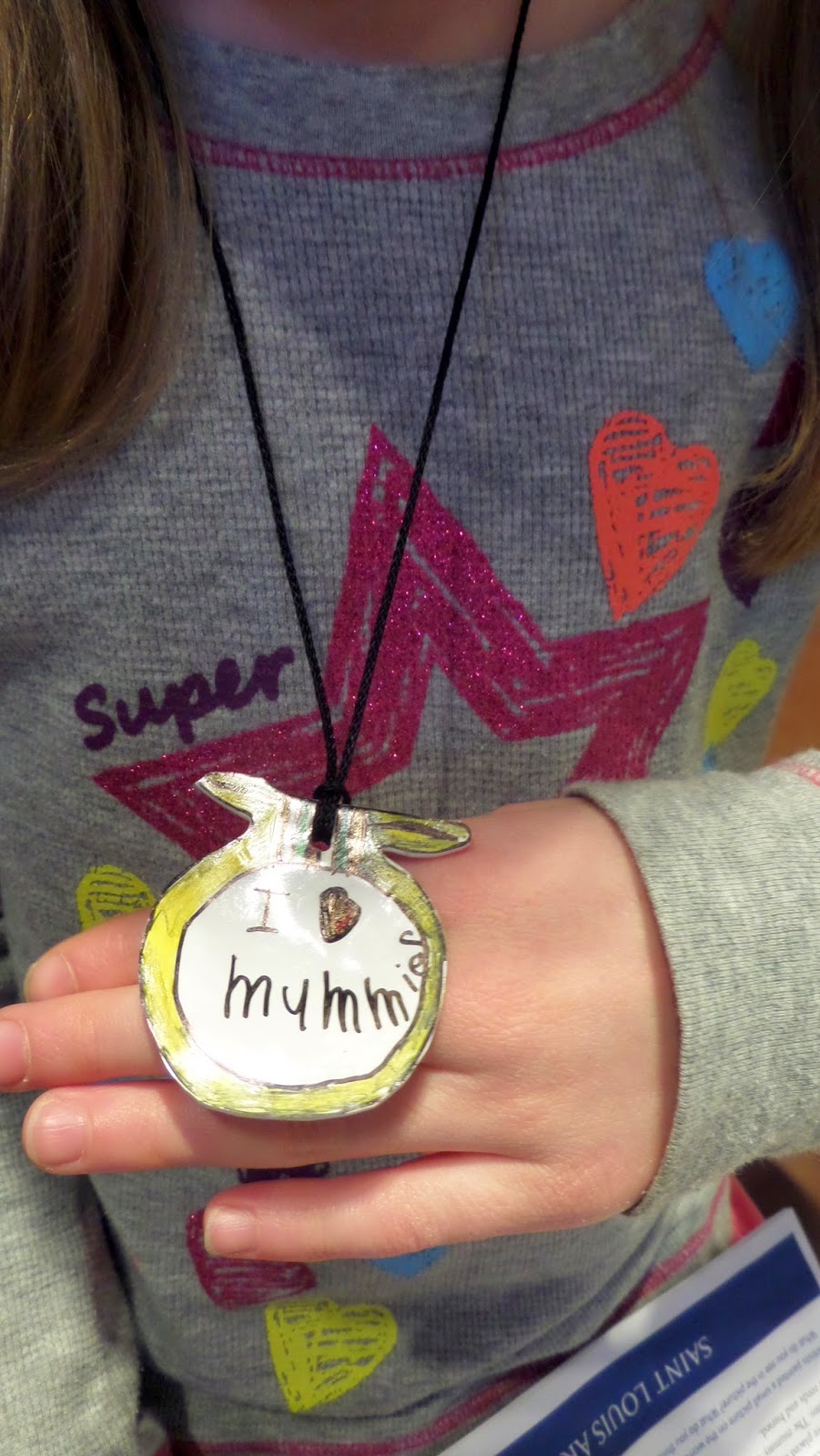