You can't be married to someone for 10 years and not have them do or say things that make you want to put them in a headlock...while other times you're reminded just why you said, "I do."

Steve and I were brought up very differently.  I grew up in the burbs and spent Saturdays at the ice rink or hanging out with girlfriends at the mall; whereas my husband spent most of his childhood either knee deep in a "crick" or 20 feet high in a tree-stand.  I love to dance and miss twirling at Casa Loma Ballroom or rockin to the beat at a club.  On the other hand, my guy would rather have all his teeth pulled out without anesthesia.  Sometimes he and I even speak a different language.  Instead of mine and yours, Steve says mine and your'ins and he regularly uses colorful phrases like, "It's hotter than a cowboy's 45 on a Saturday night" or "If you're gonna be a bear -- be a grizzly."  When I'm feeling overwhelmed by a problem, he's the one to remind me, "Remember...how do you eat an elephant?"

So, although my husband prefers to give our lawn a mullet over a traditional crew cut and the job of repainting our bathroom (Mother's Day gift circa 2008) is only 80% complete and we've been living with a "phantom flush" for years, he is also the one who ensures that the checkbook is balanced and I have gas in my tank.  And, he's first to notice when I'm low on chocolate and regularly replenishes my stash.  On late evenings before I can finish saying,"I'm hungry, but there's nothing good in the fridge."  He's already putting on his shoes and asking,"What do you want?"

Which explains why this past Saturday (his first one off in weeks) he chose to rise before dawn to spend part of it baking under the sweltering heat to pick berries...for me.  He set off with a three gallon bucket and a desire to fill it so as to have enough fruit to make a couple batches of jam and a big ol' cobbler. Three hours later, he returned home looking like he'd wrestled with a clowder of cats.  He had cuts, scratches and thorns all over his hands and knuckles and up and down his arms.  His shirt and pants were heavily snagged from dealing with the tangle of thorns that cover each and every berry branch. He was a mess, but was wearing his lopsided grin.  And, although I've not been around many swine, I think he really was "happier than a pig in poop" when he presented me with his booty -- nearly two gallons of blackberries.

He and I went on to spend a couple hours together washing and mashing berries and preparing our mason jars for jam.  So, although you won't find Steve and I cuttin' a rug together, for one afternoon we were for all intents and purposes...jammin. 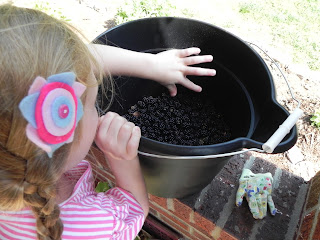 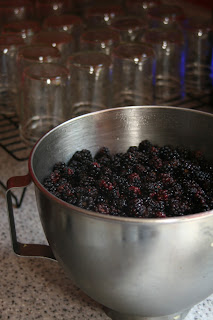 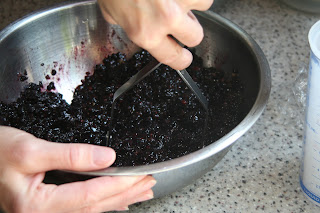 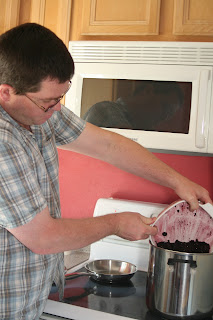 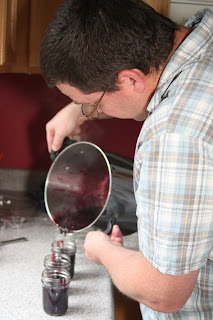 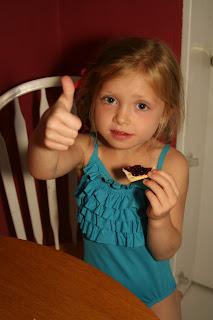 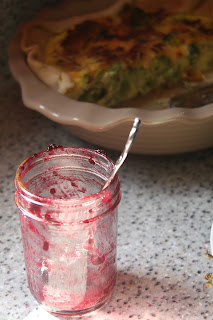