Thursday was Visitor's Day for the primary-aged groups at Camp Happy Day.  It's an opportunity for parents, friends and family members to shadow their favorite camper.  I arrived a little late as Noah's camp begins before Natalie's and by the time I had dropped her off and doubled back to Camp Happy Day, his P.E. class was already in progress. When I entered the gym, I found Noah making his descent from a 30 ft. climb.  And, he was just fine with that!  In fact, he was so comfortable with climbing - he was happy to head to the top again so that I could capture the Kodak moment.  It was awesome and a good boost to his ego to perform in front of his peers and me. 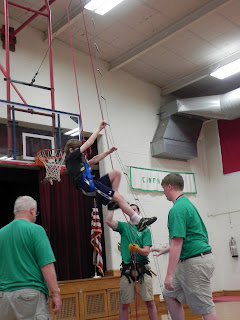 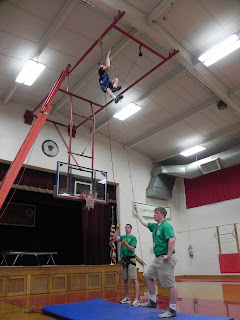 After P.E., I followed him to his speech therapy class.  He and two other campers worked with a therapist on idioms and I wouldn't be pulling your leg if I told you Noah seemed to be at home...maybe even enjoying himself during the session.

After speech he had arts & crafts and I worked alongside him to paint what will soon be a snake with movable parts made from toilet paper rolls.

Next, I joined him for his math class in which the kids each created their own cube as a tactile means to understanding basic geometry terms like base, surface, and volume. Prior to heading to reading, his last class, the group made a pit stop at the "prize store" to select a reward for completing their weekly homework assignments.


Click here for more information on Camp Happy Day.
Posted by Andrea at 7:29 AM